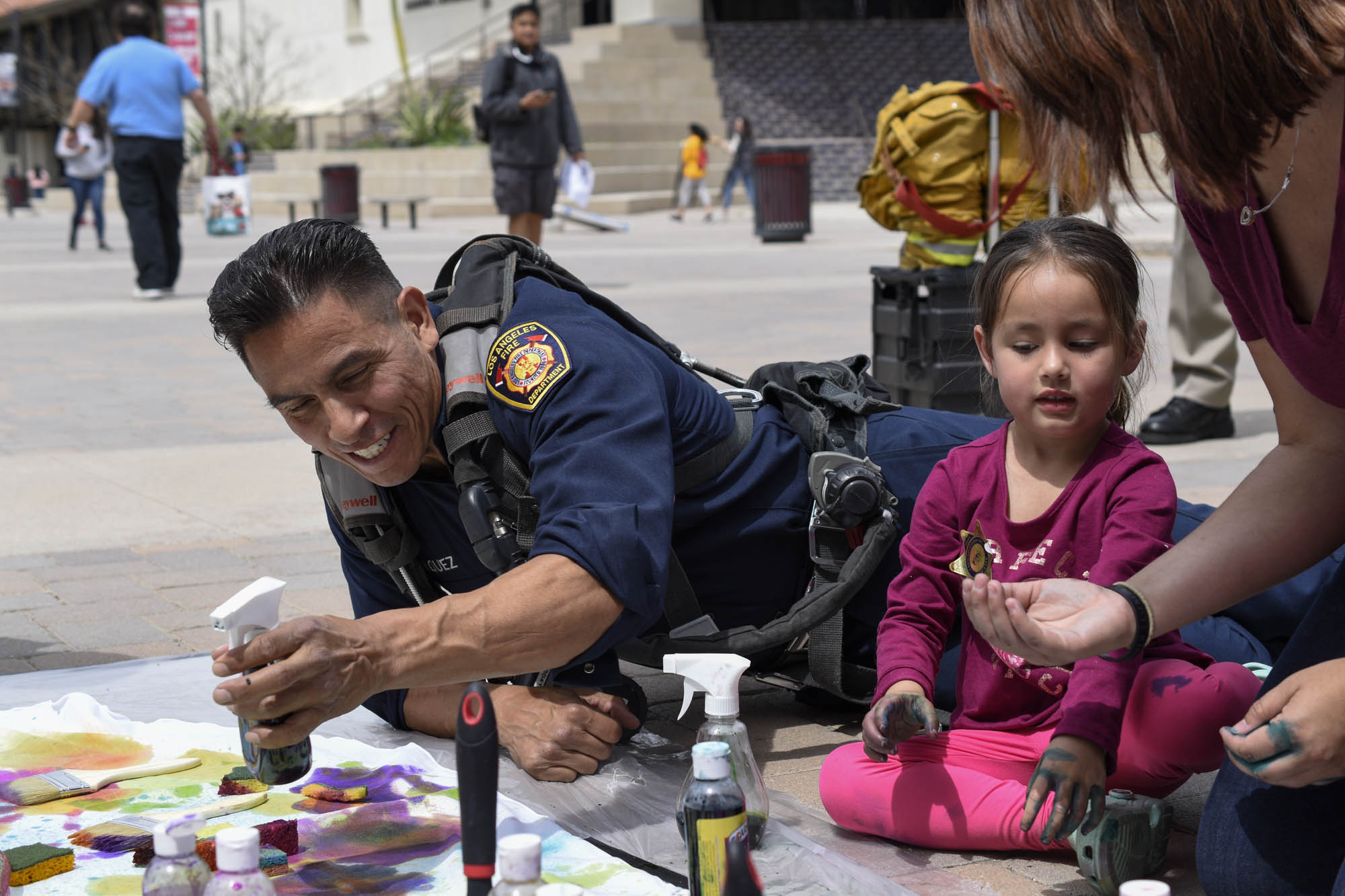 A scene that you don’t see everyday; a firefighter finger painting with a little girl and her mother, brushing and plotting droplets of the rainbow. Christine Silva is just one of many children with creative talent waiting to be unleashed, and this event that even an officer would pull over his vehicle to enjoy, was established by a developing club at Pierce College.

The Child Development Club was formed this semester, and aims to advocate learning and empowering young children.

Annabella Gomez, president of the club, organized it in the span of beginning of March to April. She said she knew a few of the members from the beginning, which helped her start the club as support.

Gomez said they grew once the club started and as soon as they started having meetings they met Denise and Sebastian.

“I think we all clicked pretty much when we got together but I knew Sabrina,” Gomez said. “She was one of my best friends and I knew Sebastian we knew each other since high school. We met and we all have the same goals we want to deal with children, promote children and we all just became a big family.”

The Week of the Young Child (WOYC) was the first event they hosted on campus. According to their flyer, it is “a five-day themed celebration to spotlight early learning, young children, families, teachers and communities.”

“We put that together by a process of ASO and discussed with other members about what we should do and we brought this idea,” Gomez said. “At first, we thought about doing an activity that was going to be here but then we decided we should bring it to Pierce College and be more interactive with students on campus and let them know we are here.”

Gomez thinks the club has been good for them. They have worked with a few children so far but mostly have been interacting with Pierce students to spread awareness.

“Our next event would be Annabelle Godwin Play Day, which is off campus,” Gomez said. “Is an event dedicated to children to bring awareness to playing and early learning. We are going to have a booth and activity and at the same time promote our club.”

Gomez recalls what the hardest thing about managing club is to her.

“It’s a bit difficult because everyone has their own time and it’s really hard to put all of us together instead of where we meet generally at the meetings,” Gomez said.

Denise Acosta, a club member and child development major, said that she always had interest in joining a club about her major, but did not have the time until this semester.

“There were some announcements during my childhood development classes about the club and I wanted to join a club last semester, but I’m not sure what happened with that,” Acosta said. “I just didn’t have any time or something like that. This semester I was like, ‘I am free to stay, I’m going to do it.’ So I did.”

She said the club makes you put yourself out there and she learned to interact with more people.

“I did Work Together Wednesday and we had a parachute. I’m currently taking child development 22 and 42, which 22 I’m working off campus at a childcare facilities for my hours,” Acosta said.

Acosta enjoys spending her time with the club and learns how to open up through interacting with children.

“It’s not just that,” Acosta said. “You help a child grow, you help them develop. Being in a child care facility, some of these kids are one-years old and they’re with us literally all day from the morning until late afternoon to pick up. So we are basically raising them like you’re a big influence on these kids’ lives.”

Acosta said their advisor Alma Cortes was advocating for this club to be created.

“She wanted the child development major to be known because our department is pretty small,” Acosta said.

Sabrina Cervantes club representative feels like child development can flow into with whatever others are doing in their academic careers.

“It doesn’t really matter what major you’re in, it’s just child development is so important. Just as a people in general, it’s just important things to know and knowing the psychology of it as well,” Sabrina Cervantes said.

Sabrina said it’s really exciting for her be a club representative and likes what the club does as a while.

“I like being part of the committee and being engage,”  Sabrina Cervantes said. “I love having my voice and my input implemented in the club. It’s also a new position too because I’ve never been in like that kind of leadership position. I’ve never been in a club before, so it’s just nice to like learn as I go on and hopefully do a good job.”

Sebastian Cervantes club representative is the only male member, but believes it is important because it provides another psychological perspective from another gender.

“Oh, it’s pretty big advantage for me. Learning all the stuff that I have and like knowing the science of it all. It was like crazy for me, but hopefully we get more guys in the club,” Sebastian Cervantes said.

Gomez describes the clubs plans for future events, including fundraising.

“We’re also going to grow the funds for the clubs so we can go out and do more things in mind, like our screenings. It’s not just going to be us at the Mall handing out fliers. We’re going to hopefully engage more people,” Gomez said.

Overall, Sabrina Cervantes believes everyone should know the basics of child development.

“It’s just a lot of knowing the material and these are just really everyday important things if you’re going to have a kid or if you’re going to work with kids. I just think everyone should know these things,” Sabrina Cervantes said.