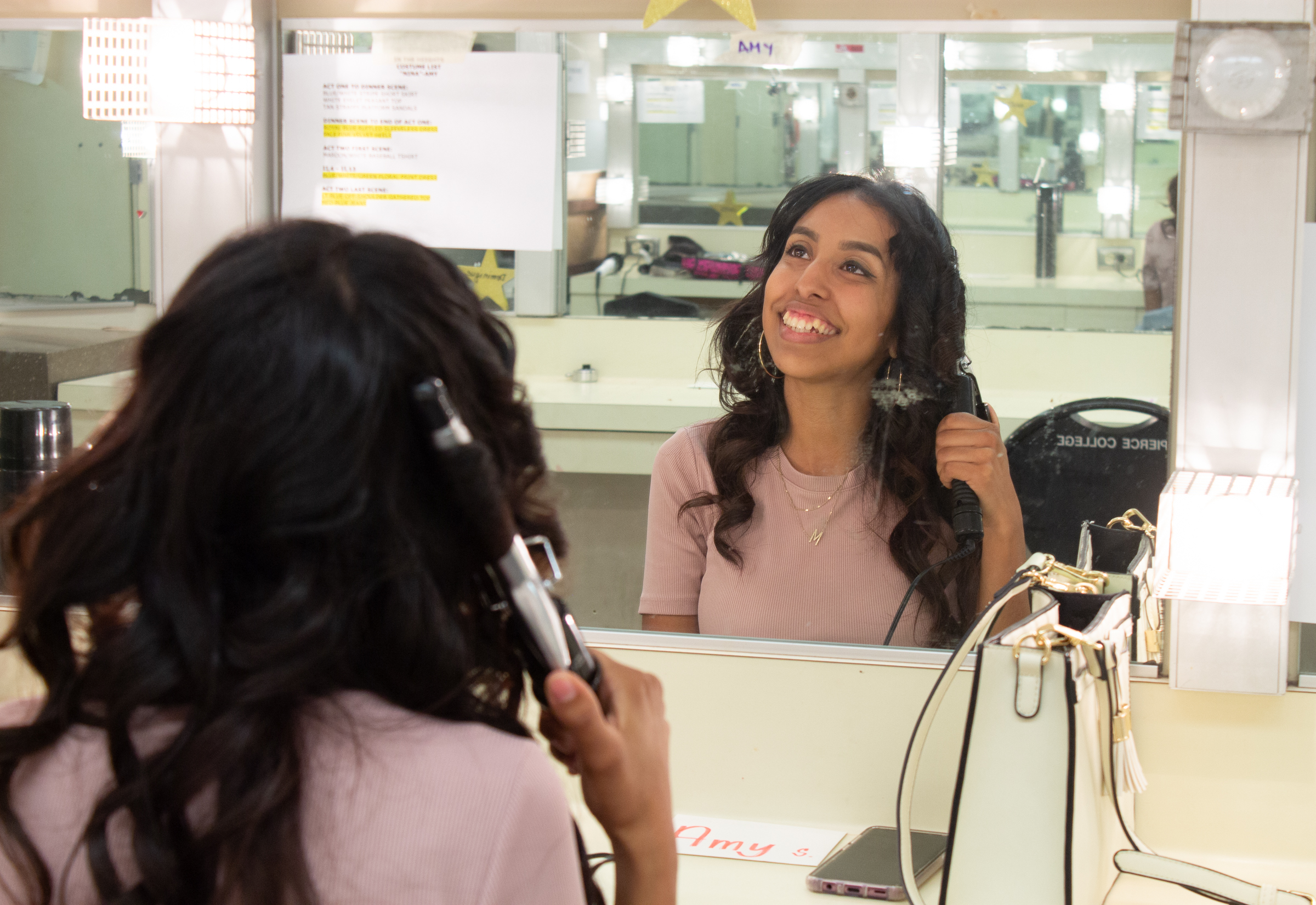 There’s a lot of Amy Solano in the Nina character from “In the Heights,” the role she played this month at Pierce College. Like Nina, who misses home and returns to her roots, Solano has made her way back to her first love–singing.

Straight out of high school, Solano was accepted into her dream college, the University of California, Santa Cruz, where she participated in the music program. But after receiving bad grades and, she was unsure what to do next.

Solano said she cried for about two weeks, and her closest friends and cousin would often visit her and try to coax her out of the house.

“We went out to eat and I was like, just sitting there like, ‘My life sucks, it’s over’,” Solano said. “They [her friends and cousin] were like, ‘No, no, no, you need to do something that makes you happy.’ So I dyed my hair cherry red and I decided to last minute sign up for music classes at Valley College.”

However, two years ago Solano physically lost her voice, to the point where it hurt her to talk. She took this as another sign from the universe to stop pursuing music, and from that point, Solano decided to switch her major to animal sciences and transfer to Pierce College.

“I was absolutely miserable with what I was doing,” Solano said. “I wasn’t motivated to want to study for my classes. I was just barely making it by and I saw how passionate everybody else was around me about things. And I’m just like, I’m not like these people, especially like in the science department.”

One of the important people who helped Solano find her way back to music was her cousin, Monica Vigil.

Solano and Vigil both attended to Pierce together. Vigil was even the one who convinced Solano to take a introduction to acting class with Shaheen Vaaz.

“I took it and it was just totally life-changing because [Vigil] saw how miserable I was getting and she was like, ‘You need to go back to that creative side of yourself,’ because I realized I’m a creative person,” Solano said. “I need some sort of outlet because if I don’t have an outlet, I’ll just dye my hair crazy colors.”

But during her time in the animal science program, Solano was diagnosed with colitis.

“I went to the emergency room a couple times, so it did take away from that,” Solano said. “But luckily it came under control and then once I got into the music program here, it didn’t really affect me. But then when I became pregnant it kind of like flared up again. So it only affected me when I was, when I was pregnant.”

During her pregnancy, Solano was able to work as the assistant director to Vaaz in “The Arabian Nights” in 2017. More recently, Solano and Vaaz got to work together again in “In the Heights,” which just finished its run on the Pierce stage on May 5.

“Amy is surprising in many ways – she seems fragile but then reveals incredible strength, she is quiet but has deeply perceptive feedback/questions, her softness has a core of real power within,” Vaaz said in an email interview. “She was my assistant director on “The Arabian Nights” while pregnant with her daughter and found a way, and believe me it’s not easy, to return to “In the Heights” as a lead actor while nursing and raising and nurturing her baby. I’m very proud of her.”

Between “Arabian Nights” and “In the Heights”, Solano took a year off to do speech therapy and raise her child. But when the role of Nina came up for “In the Heights,” Solano was hesitant about auditioning. Solano’s biggest concern was if she should be doing the play when she has a child at home to care for.

While her family was supportive of her aspirations, the best advice she received was from her mom and husband.

“My mom actually told me, ‘You don’t stop being who you are just because you’re a mom’,” Solano said. “You can’t forget about who you are. So I’m like, ‘You know what, you’re right.’ So with that they were like, go for this. My husband is like a stage mom for me, which is hysterical because they were like, Go for it, we’ll figure it out.”

Although there were times that Solano felt overwhelmingly guilty for leaving her daughter during rehearsals three times a week, she said the support from the cast helped her stay grounded.

“I like had a lot of stuff, a lot of that going on at home I would feel really guilty,” Solano said. “But then when I would come here, I feel like everybody’s so great. Everybody has such a positive attitude about things that it’s like, how was I upset or anything like carrying that from home. So, luckily when I was here, I would have at least those three hours where I could forget everything went on in my personal life and just delve into a whole other world.”

While Solano felt support from the cast, she also returned the sentiment to Brenda Garcia who plays Camila, Nina’s mom in the show.

“Amy is so open and giving as a fellow actor,” Garcia said “I play her mom and to play an authentic relationship, especially in the Latino community, there’s a lot of hugging, physical contact and we talked about that. Would she be comfortable with it? Because some people just aren’t comfortable with the physical contact. So we discussed that and she was just, ‘Whatever you want to do, you know, I’m Latin, I know my family, we hug and kissed or whatever you want to do.’ So it made it organic for me to respond to her as my daughter without any hesitation.”

While there were times Solano struggled during rehearsals, the role was important to her because it is equally rewarding and challenging.

Solano’s performance as Nina marks her return to theater after a year off.

“This is kind of like a welcome back after having my baby, but also a welcome back after losing my voice,” Solano said. “Actually having the confidence to sing, because the last time I was actually in a production to sing was in 2013. Since then, I haven’t been able to really push my voice cause unfortunately I had some improper training and so I lost my voice. So a big part of this journey has been finding quite literally my voice again.”