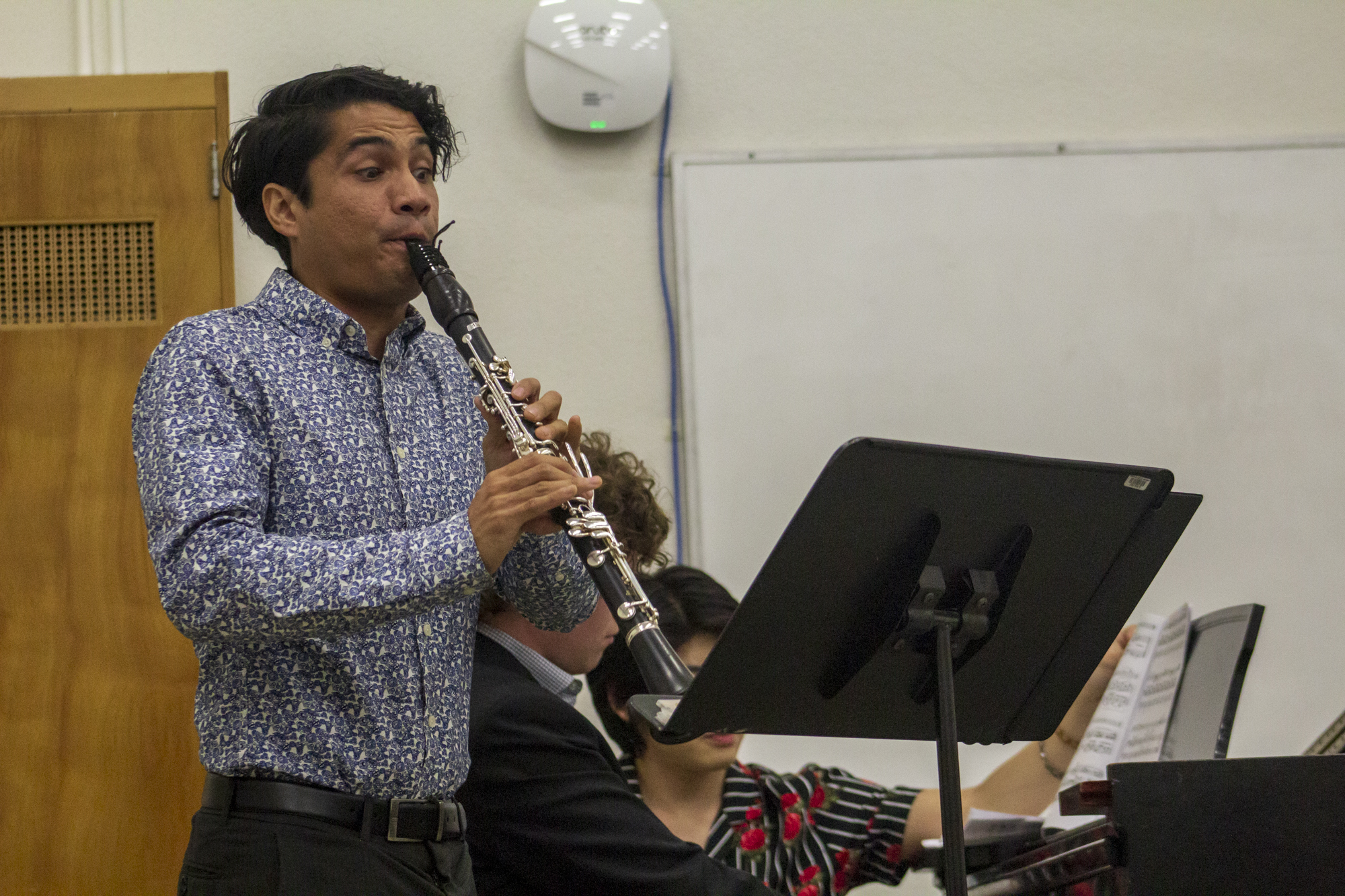 The musician filled the room with enthusiasm as he swayed back and forth while playing intense pieces on the clarinet originating from the 17th, 18th, and 19th century.

Clarinet instructor Micah Wright is a musician in the Los Angeles area who performs in solo, chamber, studio and orchestra settings. On Thursday, Oct. 24 he performed five pieces on the clarinet and was accompanied by his friend and organist Thomas Mellan on the piano in room 3400.

Wright attended and received his clarinet performance degrees from USC, Rice University, and Drake University. He currently owns a private studio and is a D’Addario Woodwinds performing artist while teaching clinics and masterclasses throughout the Southwest.

Mellan was born in Lyon, France and his catalogue of over 30 compositions includes orchestra, chamber and solo works. He is currently pursuing a Master of Music degree in composition at USC, studying with Donald Crockett.

Wright showed liveliness and love for the music the minute he began to play the first song, “Sonate,” by Francis Poulenc, who is a French composer from the 19th century. The first two movements of this piece started off slow and portrayed heavy emotions while the third movement picked up the pace but still sounded ominous.

Wright has received many national and international awards including winning the 2019 and 2018 Beverly Hills National Auditions. He has also performed as a concerto soloist with several ensembles.

The second song, “Violin Sonata in E minor, K. 304,” by Wolfgang Amadeus Mozart was written in the 17th century and was originally a piece meant to be played by the violin and piano. This two movement piece started off with a much quicker tempo and didn’t consist of as many heavy emotions.

“Mozart wrote several violin sonatas, this piece can actually be played on the clarinet,” Wright said.

Before the third song, “Four Pieces for clarinet and piano, Op. 5,” by Alban Berg, Wright took a minute to talk about the piece.

“It’s very symphonic writing even though it’s just clarinet and piano, it will sound a lot more modern to you than other pieces would,” Wright said.

This piece consisted of four movements and was composed in the early 19th century. Wright and Mellan both said that it does have some similar traits to Mozart’s pieces.

The fourth song, “Scherzo Variations,” was composed by Thomas Mellan himself. He said that the piece includes the clarinet hitting the highest note possible while the piano plays the lowest notes.

Mellan has been awarded first place in the keyboard division of 2015 and 2016 national competitions sponsored by Musical Merit Foundation. Mellan was the Outstanding Graduate of the masters class of 2019 and the undergraduate class of 2017 at the University of Southern California, Thornton School of Music.

Wright and Mellan concluded their performance by saying they were going to cleanse our ears with the song, “Nocturne,” by Piotr Ilitch Tchaikovsky. This was another slow piece where the pace picks up as is goes on but much like the other pieces, it sounded menacing.

These concerts are free and take place every Thursday from 1-2 P.M. at the Performing Arts Building Mainstage unless otherwise noted. The next concert will be on Oct.31 and it will be a Joint Faculty Recital.