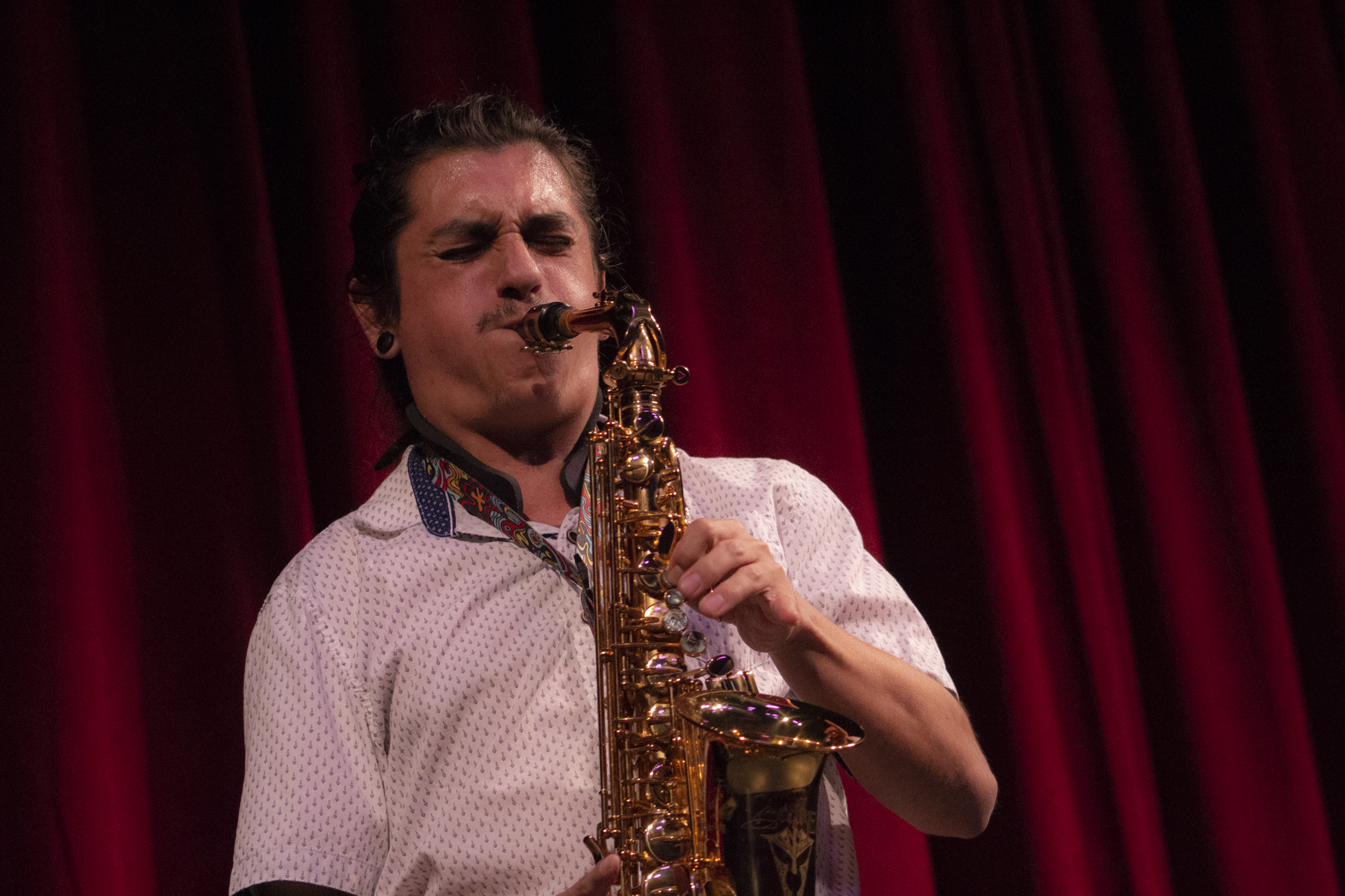 A single piano, a microphone and a sheet music stand lit in bright, warm lights set the scene for the performance to come.

The sound of shuffling feet and doors closing behind the large, red curtains built suspense as the musicians got ready for the Applied Music Program (AMP) student recital in the Performing Arts Building on Nov. 7, 2019.

Farrokh carefully tuned his violin and began to play. He started with “Violin Partita o. 2 in D minor” by Johann Sebastian Bach. As his bow bent around the strings, he swayed slightly with the instrument. Farrokh’s fixed gaze changed slightly as he furrowed his brows in intense moments.

His second song, “Sarabande & Gigue” by Bach, maintained a quicker, bouncy pace. Farrokh’s intense stare finally changed when he finished the piece, bowed and walked off the stage with a smile on his face.

Following Farrokh, Adrian Camp took the stage with his guitar and a foot stool. Camp’s performance contrasted the intense music from the previous performance as he played, “A Simple Song” by Giovanni Legrenzi and “Se Ela Perguntar” by Dilermando Reis. Both songs were slower and calmer.

After the two instrumentalists, Lexi Cantu sang on stage, accompanied by Lance Merrill on the piano. Cantu performed an Italian aria and a Spanish folksong; “Che Fiero Costume” by Giovanni Legrenzi and “Al Pano Moruno” by Manuel de Falla. Her voice rang through the room as she jumped from high notes to low, while maintaining a determined look to the back of the theater.

As Cantu left, Jonathan Engstrom took her place and sang with Merrill, accompanying him on the piano. Engstrom performed “The Sigh by Gerald Finzi” and “Ciel e Terra Armi Di Sdegno” by G.F. Handel. As he sang, he rested his left hand on the piano and looked around the room. When he continued to sing, he began to sway to the music, tap his fingers and bob his head, complementing the lively music.

After Engrstrom, Edwing Franco came out with an alto saxophone and played with Merrill on the piano. Franco took a minute to tune his instrument and interact with Merrill before he closed his eyes, furrowed his brows and took his first breath. As the two played “Footprints” by Waye Shorter, Franco danced on the stage, swinging his saxophone up and down and moving around. When finished, Franco and Merrill bowed and left the stage, inviting Aro Caitlin to take their place.

Caitlin performed “God of the Northern Forest” by Phillip Houghton on the guitar. The song stood out because of its stranger tone. Caitlin strongly slapped the strings. His hands and head trembled as he played. The powerful energy built into a profound expression of music until the very end when the strumming began to fade away, and Caitlin closed his eyes.

Following Caitlin, Samantha Rosenberg sang four songs by Vincent Persichetti while accompanied by Dr. Garineh Avakian on the piano. Rosenberg stood out as she performed with more than her voice. She moved around, showed interesting expressions and interacted with the audience, as if she were performing in a musical theater piece. Her short, enthusiastic songs were filled with quirky smiles and shuffling feet.

Sahand Zare closed the show with, “Violin Sonata No. 4 in A minor” by Ludwig van Beethoven on the violin, accompanied by Dr. Hyunju Hwang on the piano. He played loudly and quickly as the intensity of the music grew, swaying to the song and tapping his toes.

On most Thursdays, the AMP puts on free concerts in the Performing Arts Building from 1 p.m. to 2 p.m. The next concert will also feature students.