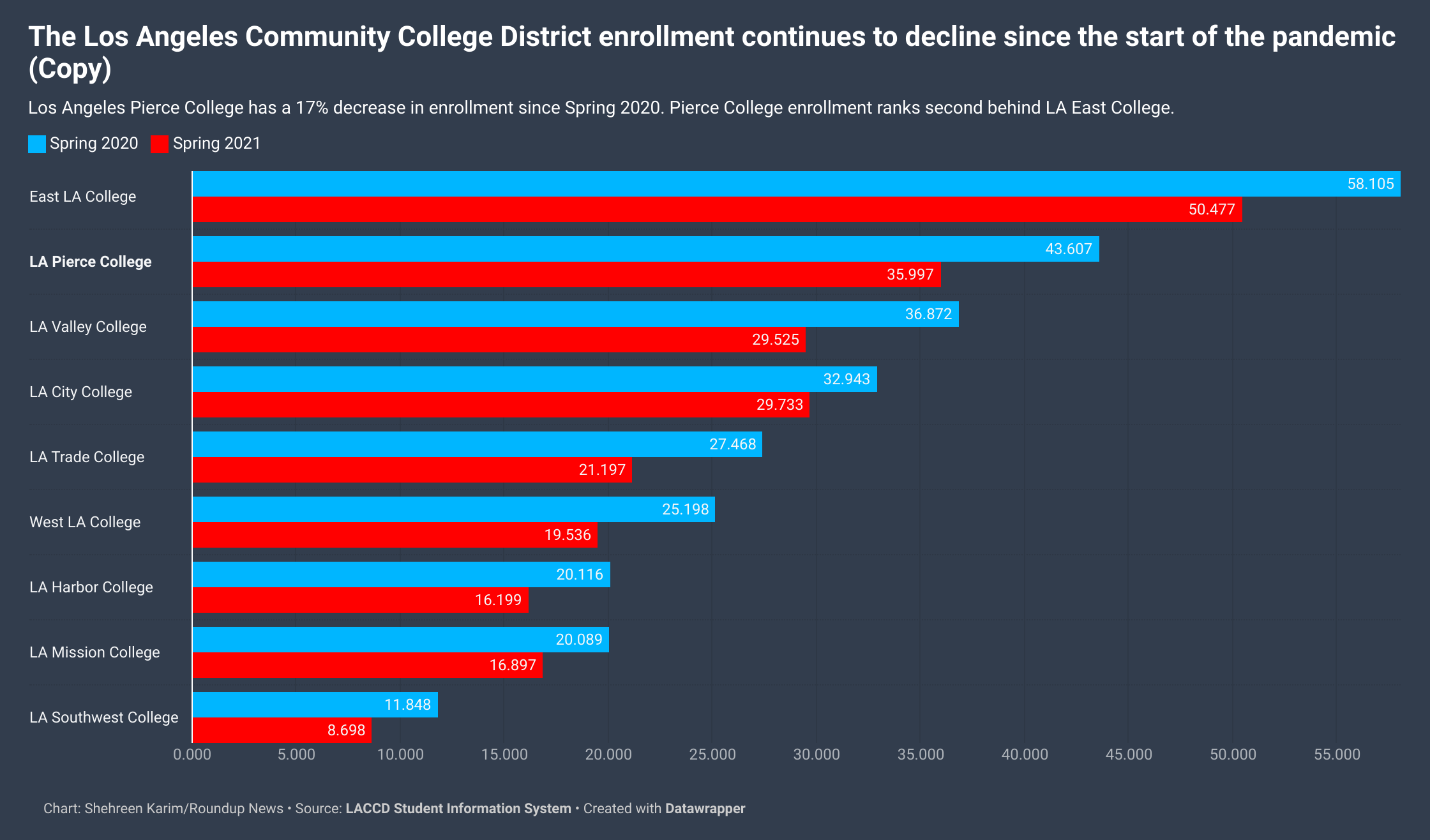 Statewide, community colleges are experiencing dips in enrollment because of COVID-19.

Pierce College is no different.

Pierce faces a decline of 17% in enrollment since spring 2020.

But Pierce President Alexis Montevirgen said Pierce’s enrollment is doing better than most colleges in the district.

“I think right now the enrollment issues aren’t necessarily
something to be overly concerned about given how it’s looking like for all of our sister colleges even within LACCD,” Montevirgen said.

Although many Pierce students are taking multiple classes, the overall headcount has gone down in a much sharper percentage than the enrollment itself did.

The amount of individual students this semester is 15,724, while before the distanced learning was 18,049, according to the LACCD student information system.

Academic Senate President Barbara Anderson said the decline in headcount can be attributed to not enough new highschool students are enrolling.

This fall, there was a 21.7 percent decline in highschool graduates going to college immediately when compared to 2019 graduates,according to a report by the National Student Clearinghouse Research Center.

Performing arts professor Michael Gend said that hard to convert classes such as theater were most impacted with reduced enrollment.

“You hear the word kinesiology, which implies physical education, or you hear the word dance or theater and you imagine those kinds of performances in-person, so students might be less motivated to come,” Gend said.

With distanced learning, Gend said that students can enroll in any community college no matter how far they are from the campus, which is another reason why Pierce is seeing declines in enrollment.

“There’s a lot of competition that isn’t normally there,” Gend said. “Normally, we would service our geographical area, and the students would come to us because they live in the area. But that isn’t so much anymore.”

Math department Chair Eddie Tchertchian said that upper division math courses such as calculus and trigonometry are maintaining enrollment, while algebra and statistics were the hardest hit. He attributes this decline to how more students are able to enroll in transfer level math courses directly.

The enrollment management committee launched a “one more class” campaign, encouraging students to enroll in just one more class if they are able to.

Gend said that getting that message to students isn’t as easy. He explained that although he encouraged his dance students to enroll in more classes if they are able to, he has no way of knowing if they did.

Enrollment in spring 2020 before the pandemic saw more students enrolled than in 2019, which made enrollment more than 100% compared to the previous year. But this semester, Pierce is seeing only an 83% in enrollment from last year.

Director of the Transfer Center Sunday Salter said that a decline in enrollment can be because of the remote environment where students don’t feel as engaged. She said seeing enrollment return to pre-COVID-19 numbers might take some time.

“My gut tells me it’s going to be awhile,” Salter said. “When our economy is struggling, typically we have higher enrollment, because a lot of people are out of work. But that’s not what we’re seeing.”

After the pandemic and a return to in-person instruction, Montevirgen is optimistic.

“I firmly believe that once we make our way out of the pandemic and we have the proper vaccines and the therapeutics, there will be sort of a return to education,” Montevirgen said.