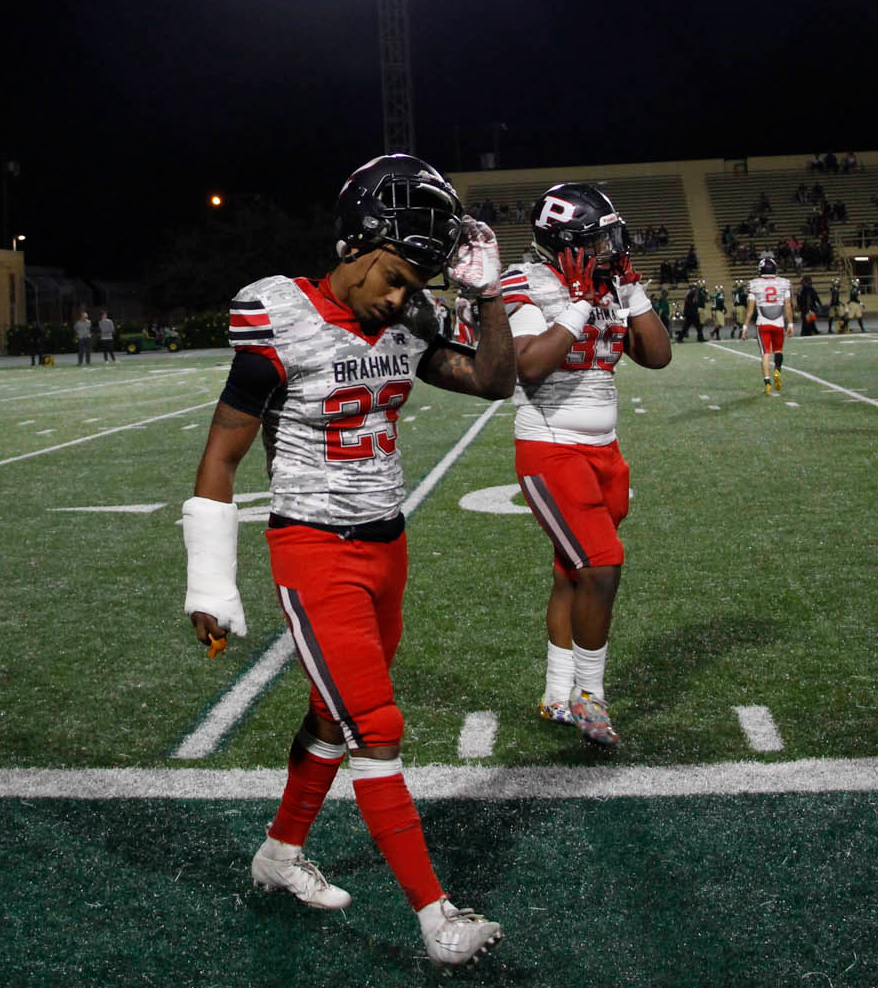 Marking the first Victory Bell game since the pandemic, the Brahmas were beaten by rival team Valley College Monarchs and lost the chance to ring the bell.

The Brahmas were defeated by the Monarchs 58-9.

Wide receiver Robert Terry said this fall season was the worst he has ever played.

“This was just bullshit and this whole program is a fucking joke,” Terry said. “We should have not gone 0-10. We should have done a lot of things, but what are we supposed to do? We’re players, all we can do is perform.”

Terry said the Brahmas were a considerably small team compared to Valley and that the team size played into their loss.

“Everybody’s playing everywhere,” Terry said. “You’re putting in a guy who is tired and is risking him to get injured. We were under-recruited this whole season.”

Pierce College interim head coach Anthony Harris said that being outnumbered was one of the biggest reasons for loss of motivation and strength.

“28 players against 68, we just got run down and beat up,” Harris said. “I think we came out really strong and moved the ball straight down the field but we just weren’t able to finish.”

Valley College head coach Lester Towns said he understood the challenge of having a small team and was able to work on building his team’s strength through it.

“I felt what the team and the coach were going through because I remember being there in 2019,” Towns said. “The difference between this year and that year was my thought process. Last year, I thought I didn’t have enough players and this year, I told our team to compete and do what we do.”

Towns said the pandemic has also halted the team’s practice, but they were able to adapt and improvise.

“During COVID, I have to find innovative ways to keep them engaged,” Towns said. “We had Zoom meetings twice a week where we’d watch films. I was Zoomed out but, that was the only thing we could do. We couldn’t lift or do anything.”

Although Pierce’s football was small, players had also lost their efforts after Valley continuously ran numerous yards or played aggressively.

Wide receiver Kamron Moreno said the game did not demonstrate his full ability and efforts.

“Everybody goes through adversity, so I definitely want to see us get stronger and faster for next season,” Moreno said. “We’ve got to be more of a team and collectively come together.”

“I was proud of how we moved the ball up and down the field as a team and completed some passes on big downs,” Jones said. “We just got to play throughout the whole four quarters and put it all together to finish the job.”

Many players on the team were sophomores and ended the season with a defeat.

Terry said he hopes to see more involvement in those who come in next season.

“We had no help this year, so I hope for the best for everybody,” Terry said. “I really hope they get somebody who recruits, who wants to get them in the weight room and that feeds them the knowledge that they need to become better.”

Jones said he believes that once you have decided on something, you need to stick with it and move towards success. He also hopes that the next season will be better.

“For the people who come in and do what I have gone through, hopefully weigh all your decisions and make sure that is what you want to do and where you want to go,” Jones said. “Whenever you get to where you get, you have to keep pushing. No matter what the outcome is.”

With the loss, Brahmas finish the season 0-8.