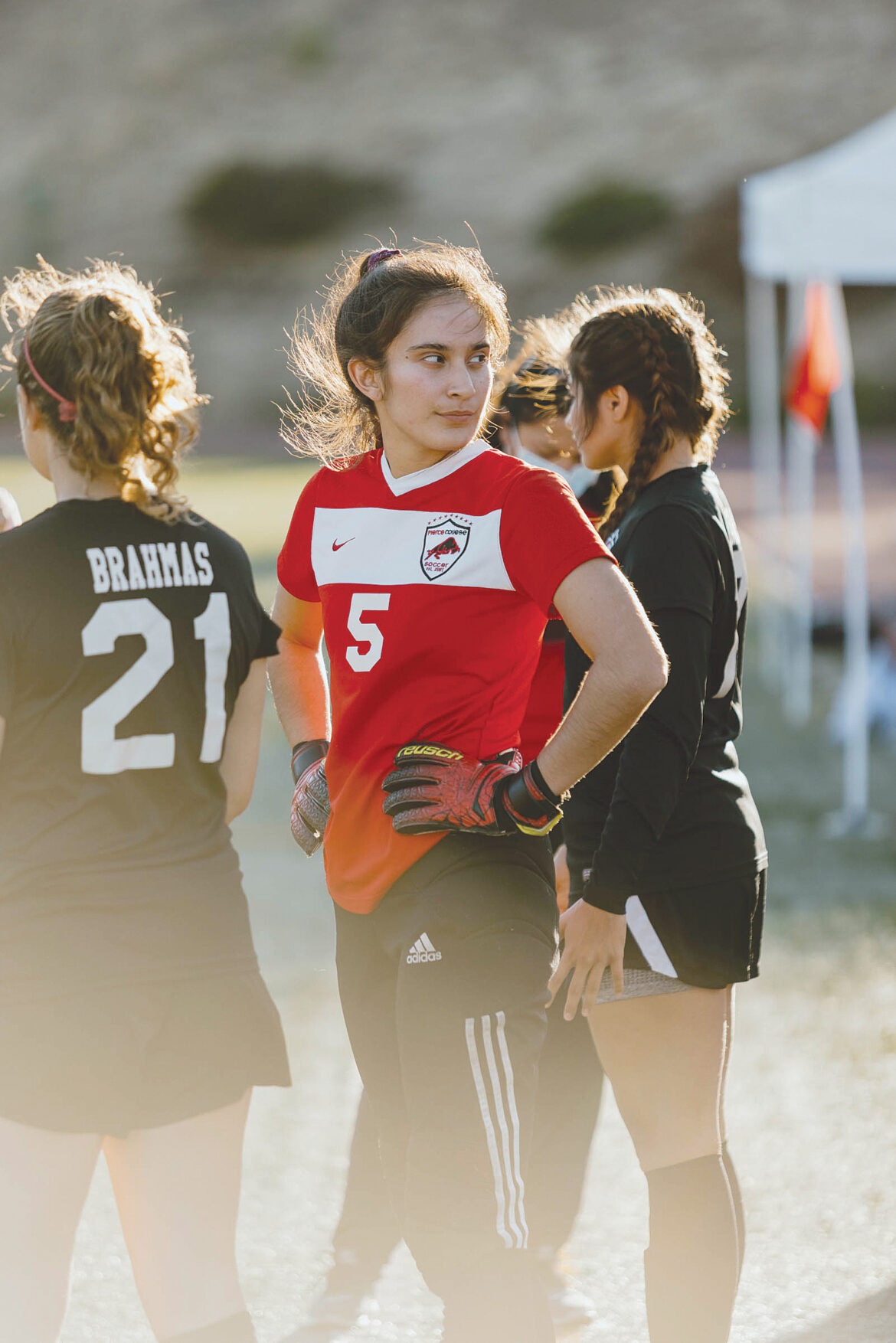 Rosas played three out of four years at Kennedy High School before coming to Pierce.

“Once I stopped, I figured out that I really loved it,” Rosas said. “It was really sad for me when I wasn’t playing so I figured out this was my passion and this is something I want to keep on doing.”

The Pierce College women’s soccer team won their 300th game this season with Rosas as the starting goalie.

Athletic Director Susan Armenta said that the win was a milestone for the soccer team and for Rosas.

“I’m proud of the fact they accomplished that through this season, especially because it’s been challenging after not having been able to compete in the last season,” Armenta said. “Anabelle’s definitely stepping up to her role. To put her in this premier role I think it’s been really good for her, to know that ‘you’re capable’ and give her some confidence that she can help carry.”

During practice, Rosas gives it her all and if she has a problem or stumbles in a technique, she talks to the coaches.

“I try to do my best,” Rosas said. “Even for games when they score a goal on me, I go to Coach Joandra and I’m like ‘Did you see that?’ and ‘What could I have done better to fix that?’”

Off the field and outside of team practice, Rosas likes to watch soccer games with teams such as Real Madrid and Barcelona to recognize and understand plays and strategies. She also likes to practice with her dad, having him throw balls at the goal post and her practice catching and punting.

“My dad is the one that really got me into soccer to begin with,” Rosas said. “I had this little notebook where I would draw a jersey with the number 13 and then ‘Rosas’ on the bottom because I wanted to be one of those girls on the team.”

Rosas said she believes soccer is a passion. It helps her stay grounded and put her efforts into something she enjoys.

“It’s like a stress reliever for me,” Rosas said. “When I’m feeling stressed and I come out on this field, everything just goes away. I’m focused on the game and nothing else so it’s like an outlet for me.”

Assistant Coach Joandra Ramirez has worked with Rosas since high school. She said she has seen her confidence and her skills develop all throughout high school and into college.

“She’s a driven player and is very hard on herself,” Ramirez said. “She’s willing to learn and she’ll listen to what you’re telling her. Her confidence has definitely boosted her presence and just how good she is at being able to react to the shots.”

Rosas was not as experienced compared to her other teammates who played on club teams before college. Ramirez said that as much as Rosas is growing and practicing, she still needs to work on her confidence.

“Just like her strength has been that she’s gained confidence, she still needs a lot more confidence out on that field,” Ramirez said. “One of the things coming in was that she didn’t have the experience as a goalkeeper so as she’s playing more, coming out to practice, getting more training and asking questions, I think she’s able to see where she is improving and gaining.”

Head Coach Adolfo Perez said that soccer is a cruel sport and that Rosas has been able to move past mistakes and hardships.

“You can have 20 opportunities and not score but then you can also have one shot and score,” Perez said. “Anabelle came out of nowhere to become a starter, which is hard to do. She always got ready and when the opportunity was given she did well.”

Perez said the team does not have a goalkeeping coach so Rosas has been able to improve on techniques such as punting, shot-blocking and upswinging on her own and with coach Ramirez.

“She’s only going to get better,” Perez said. “She’s always here and trains hard. She’s really the one that goes to the trainers afterwards and works on her back and strengthening, and takes advantage of what we have.”

“The plan is to go to SDSU to enter and continue playing soccer,” Rosas said. “I don’t have that much experience but I’m able to work hard and I want to keep on playing as much as I can. I feel at peace on the field.”