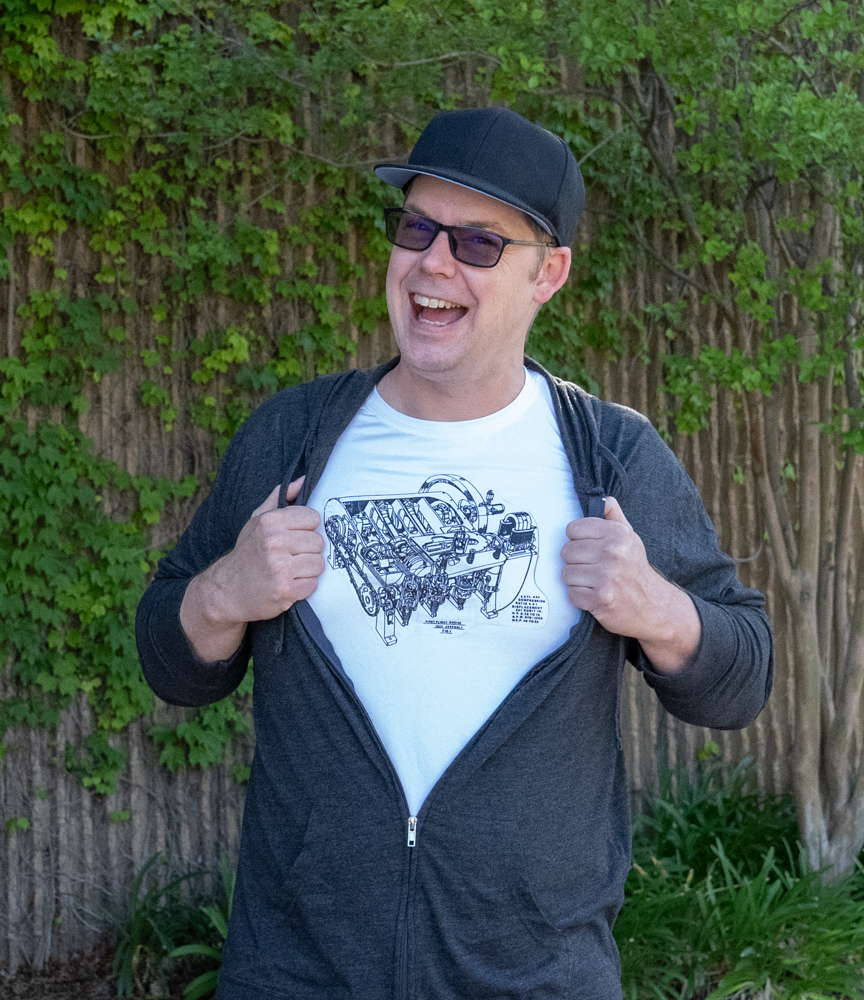 It’s been about two decades since Army veteran Joshua Lang stepped onto the stage. Not since he tried it for the first time while stationed in Germany after the 9/11 attacks did he think he would enjoy acting, let alone make it a career.

But COVID-19 lockdowns the last two years made him feel isolated, and he wanted a chance to rejoin a creative community. That’s when Theater Director Shaheen Vaaz gave him the opportunity to be in the spotlight with her new original work, “American Alien,” which through interviews, improvisations, music and spoken word, showcases the stories and the struggles of immigration in the world.

“One of my favorite pieces in it is about the green card interview,” Lang said. “My wife is from Hong Kong, so I had to go through that process.”

Lang plays a major role in two of the seven scenes that make up the play, taking on the role of a U.S. immigration officer in “Green Card Interviews” and as a member of a U.S. support group on a phone call with a man trying to get from Afghanistan to Canada in “Ajmal in the Canal.”

“This is something that has always been a big part of American culture and I think as we become more diverse as a nation and as we get older as a nation, we’ve got the naysayers who are trying to hold on to the past, but we’ve got a lot of good people who are coming here for the American Dream,” Lang said. “In between the different segments of the play, we have cast members doing interviews with their families who are immigrants. A lot of the people in the cast, their parents came here when they were younger.”

Lang’s childhood did not lead him to believe that acting and filmmaking were destined for his future. Positioned to take over his father’s company, Lang started learning to work with his hands early in life.

“Child labor laws don’t really apply if your parents own a company, so I started learning how to do concrete at 14,” Lang said. “In my junior year of high school, we would drive 150 miles north to the Mount Lassen area, Lake Almanor, and we would work on the house all day on Saturday and half-days on Sunday, and during all breaks like spring break and Thanksgiving.”

Lang eventually realized that taking over his father’s construction company wasn’t something that he wanted. Higher education didn’t seem like the right move at the time either.

“I got very used to working with my hands in high school, so sitting in a class and listening to someone talk to me about the world didn’t seem very interesting, so I decided to join the Army,” Lang said.

His time in the armed forces saw him living in Germany, and being stationed in Iraq and Afghanistan. His unit was deployed in Iraq 18 months after the Sept. 11, 2001, attack.

While serving, Lang had a chance to act in musical theater while stationed in Germany.

It was the first time in his acting career that he had lines, and he ended up winning an award for the “Best Minor Character in Musical or Comedy.”

After returning from service, Lang enrolled in film school at the Orange Coast Community College, where he took classes from 2007 to 2012.

At the same time, he was also managing live shows and film screenings at the Yost Theater in Downtown Santa Ana Historic District.

He knew that he wanted to be part of the industry and knew how to find his way in.

“The moment that really changed it for me was when I showed up as an extra on a music video set in San Diego,” Lang said. “And by the end of that day, the producer and the director of that music video knew me by name.”

This was the start of his collaboration with Akorn Entertainment, a production company based in Santa Ana.

Lang showed up once a week to take out the trash and watch the post-production magic being done on music videos. One day, he was asked to help pick up lunch for the crew shooting a commercial for Norman Reeves Honda.

“It was an eye-opening experience for me because we shot for eight to 10 hours, and we got eight seconds. It was crazy,” Lang said. “I would show up as a PA, and they would say, ‘Hey, we’ve got an editing project.’”

He eventually started bringing in other students from film school to help. His first time on a film set was for a movie about a serial killing Easter bunny titled “Bunnyman.”

“We’re kind of like Yin and Yang,” Lang said, as he described their relationship. “I can produce and shoot it as well as getting a rough edit, and she would go through and polish it and do the visual effects and the graphics and the color.”

After moving to Los Angeles, Lang continued freelancing in the movie industry, working on a bunch of films.

He and Wong started a documentary and feature film production company, Mechanical Dragons.

It was Lang’s time in the Army that inspired him to become a documentary filmmaker.

“My unit flew into a huge ambush in the beginning hours of the 2003 Iraqi mission, and I never really knew what happened,” Lang said. “All I knew was that my helicopters got shot up, and they came back, and we spent a month in the desert fixing them. Then, we went north and stayed there for the rest of the year. I always wanted to know what happened then because it (that year) was a big part of my life.”

This led to the idea behind “Apache Warrior,” a feature film made with real footage, actual attack pilot gun tapes and interviews.

The foundation for the film was a cross-country road trip that Lang took in 2016, which included four weeks, 7,500 miles and interviews with 14 people who were all pilots and mechanics.

After the film came out, Lang wanted people to see it. He started reaching out to aviation museums, not only to spread the word but to look for opportunities to talk to some of the veterans whose stories were being lost with time.

A museum in Burbank never got back to Lang, so he decided to visit it in person.

It was a shrine to early aviation, called the “Portal of the Folded Wings,” and there were three early aviation pioneers buried there.

In 2019, once all of the filming had been completed and the project was in post-production, Lang decided to sign up for classes at Pierce College.

He was four classes away from graduating with three AA degrees, and one of the classes he needed was theater.

That’s when Lang met Vaaz and invited him to participate in “American Alien.”

Lang was cast as Kirk Johnson, founder of The List Project, an organization that helps Iraqis affected by the war resettle because of their affiliation with America.

Vaaz said that they wanted someone who could fill the role well.

“We wanted someone with a real presence, but also kind of laid back, affable and friendly in nature as well,” Vaaz said. “[Lang] has been out there in the world. He had so much perspective and a range and breadth of wisdom to offer.”

Kayvan Shai, Lang’s co-star in “Ajmal in the Canal,” played the role of Ajmal who is a Canadian citizen stuck at the Kabul airport and is desperately trying to get his family out of Afghanistan.

“He’s such an energetic guy,” Shai said. “He loves to give his own input and contribute to things. He’s always going out there, trying to make friends and trying to get everyone gathered together.”

Vaaz said that Lang has had experience unlike other actors on stage and discussed how his experiences helped him become an authentic performer.

“He’s lived a little,” Vaaz said. “And that’s just invaluable when actors bring that to the table.”

Vaaz said that she hopes Lang will continue to pursue his acting and filmmaking in the future.

“He’s got a lot of enthusiasm, a lot to say and a lot to offer,” Vaaz said. “I think he’s edging toward finding his voice and what he wants to say.”