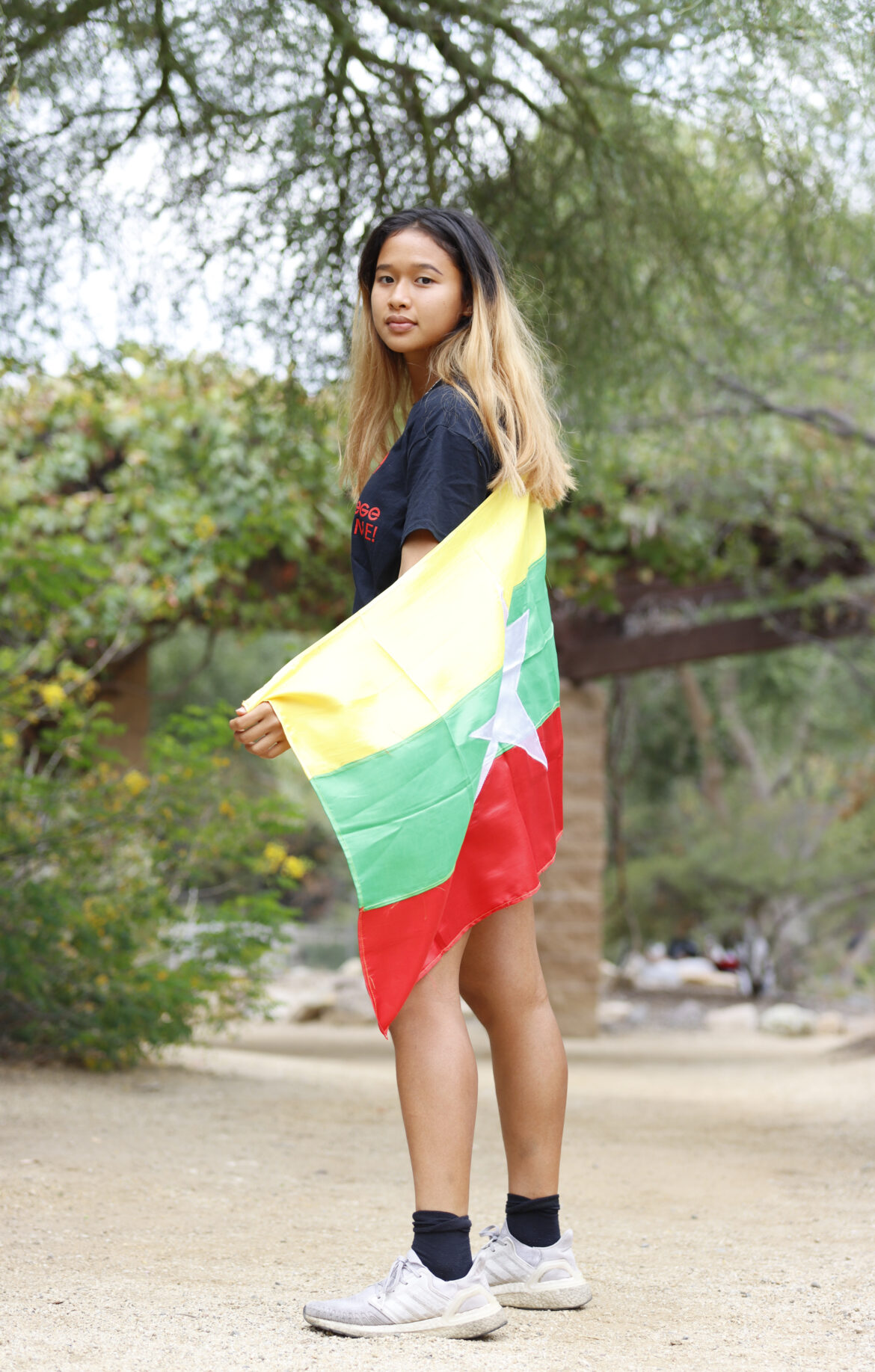 Freshman May Htet Lu came to California from Myanmar with her brother to pursue her goals both in education and in soccer. And since she arrived, Lu found a sense of belonging as a full-time student working at the school bookstore and playing mid-forward for the Brahmas soccer team.

“Working at the Pierce College Bookstore, we usually have these events, so I really like participating in [them],” Lu said. “In my life, all the road trips or all the dinners, and being with a team– those are all memorable moments.”

Lu mentioned how she took a gap year after finishing school, but her parents decided that it was for the best that she continued to push forward.

“It’s not ideal to take another two or three years off from school because it will be harder for me to continue and get my degree. So the reason I left my country is because the education is [better] than what I have back [home],” Lu said.

For Lu, soccer is important to her, if not her first priority, as she said soccer was the first sport she grew up playing and how she was a mid-fielder in her national team.

She played in the 2017 AFC U-16 Women Qualifiers and the 2019 AFC U-19 Women Championship, scoring a goal for her team in both matches.

With soccer, Lu said that she wanted to make a career out of soccer, however, Lu mentioned how in Myanmar soccer isn’t supported as much and that’s one of the main reasons why she came here.

“I always wanted to pursue this sport as a career,” Lu said. “But in my country it’s not that supported, [and] the sport wasn’t supported enough, but when I came here I saw a lot more opportunities.”

Lu spoke on how her parents wanted her to pursue nursing, but first she needed to join a college that could support her and what she’s passionate about.

That was when Lu was recommended by her brother to check out what Pierce College had to offer. And she said the first thing she did was to look at whether Pierce had any soccer programs.

“The first thing I searched was if Pierce had a soccer team,” Lu said. “So I went to the Pierce College website and went to the athletics, and then found the recruiting application.”

She said when she went to practice and tried out, she got selected.

Head coach Adolfo Perez said that Lu is an extraordinary person and player.

“She’s an extraordinary human being,” Perez said. “[I think] she’s an A-plus. Since day one, even before the season started, she’s always helping with the balls, with the cones, goals and she just shows up on time. She shows up everyday and she hasn’t missed a thing— session — she’s just remarkable.”

Captain and defender Natalia Puccio said that Lu brings a lot to the team and how she is genuine on and off the field.

“As a player, she’s incredible. The first day I saw her I thought that she was insane,” Puccio said. “She brings a lot to the field, as far as strength, height and her skill. As a person, she’s so genuine, so respectful and she’s always the first one here and the last one to leave and it definitely does not go unnoticed.”

Although Lu’s parents want her to continue nursing, she still plans on trying to see if she can integrate soccer into her life.

“With soccer, I want to honestly make a career pathway with it,” Lu said. “There are a lot of opportunities that I’m available to but obviously it requires hard work to achieve it. So I’m really hoping to get into a D-1 school and if possible I want to start a professional career with soccer.”

As of now, Lu lives with her grandmother who she said she looks after and makes her grandma proud when she shows up to her games.

“As a grandmother, she’s always curious about her grandchildren’s lives,” Lu said. “So everyday she asks me questions about how my day was. And I tell her about my day, and it’s really nice to have her by my side, coming to my games and supporting [me]. With her support, that gives me a lot of strength and energy to keep playing my games. I want to make her proud and show her what I’m capable of.”

Outside of soccer and college, Lu said that she enjoys the unpredictable California weather and how nice the locals are. When asked where she visited, Lu said she visited her aunt in San Carlos a month before the semester started, but for the most part she said that she is a homebody and stays close to her family and her roots.

“It’s just the pride I carry,” Lu said. “So being here, it’s like representing my country [and] it’s very meaningful to me. And I feel like I should carry this pride that I have very diligently. “

Then Lu added how her family is precious to her and her wish to reunite with them again.

“And then being with my family, it’s precious. I mean, it’s always precious, like we’re all separated right now, but I hope we can all meet up again one day,” Lu said.