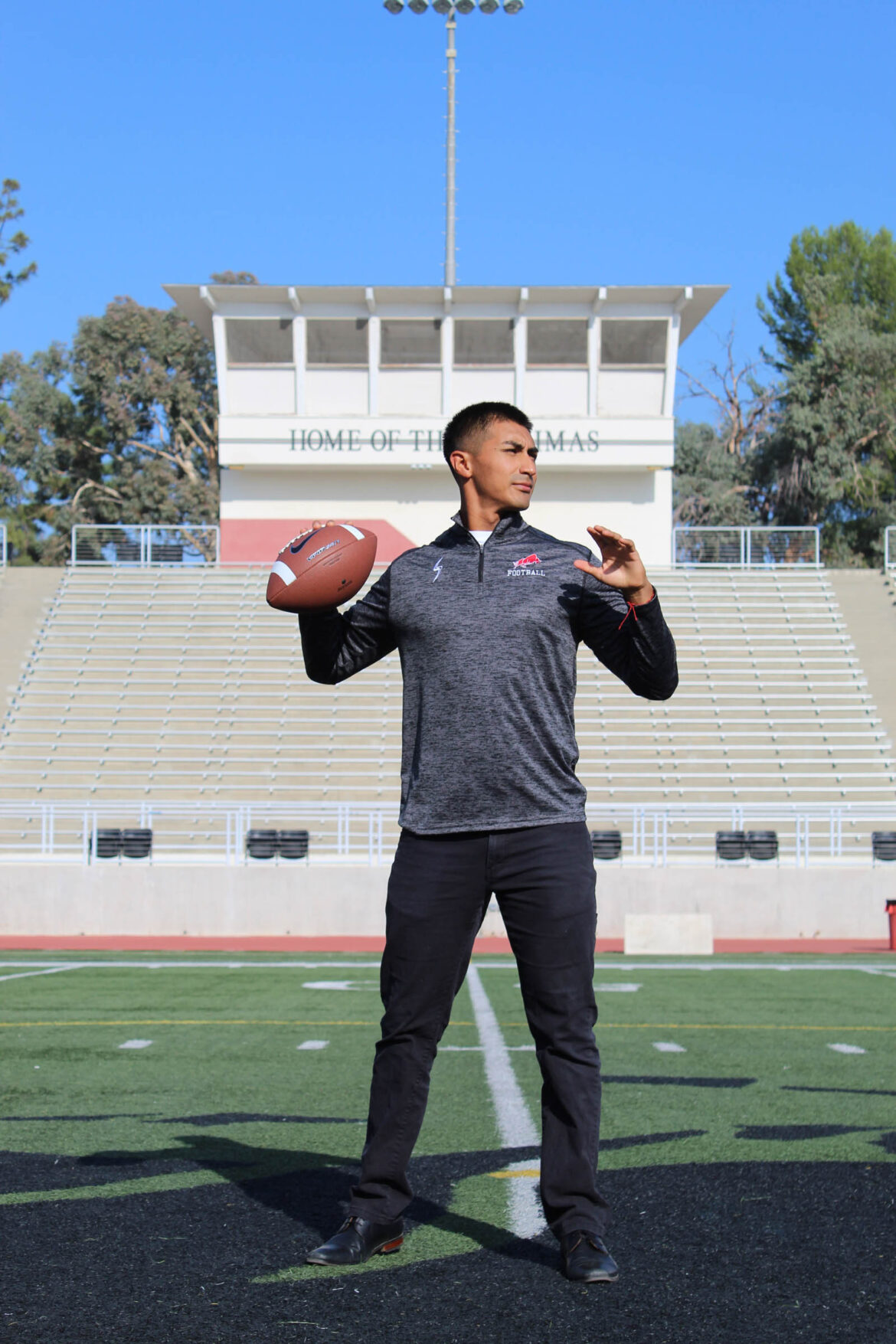 Bringing justice while being involved in the game.

For Eldridge Salguero, it began when he saw one of his older cousins playing the game, and through him he got hooked.

“I just saw one of my older cousins playing and his passion and love for the game definitely inspired me and he was actually like a big brother to me, so him doing it kind of pushed me into finding an opening into football,” Salguero said.

Before becoming a coach at the school, Salguero played for the program.

Salguero recalled the experiences he had while being a student and athlete at Pierce, appreciating all the lessons and skills he gained during his journey.

“It was definitely a life learning experience that I don’t regret, I definitely learned a lot about leadership, accountability, responsibilities, and a lot of hard work as well,” Salguero said.

As a student in 2016 and ‘17, Salguero had the opportunity of being a player under many coaches that he now works beside.

One of those coaches is head football coach and fitness center coordinator James Sims, who spoke very highly of Salguero from his time as a student.

“Outstanding young man, was excellent with doing the right things, going to class, doing the schoolwork, always at practice on time,” Sims said.  “Just, you know, one of those young men that does everything you ask of him and more.”

Assistant Head Coach Blake Word recounts Salguero as one of the most respectful students and athletes that he had ever met.

“He’s probably literally one of the most  respectful people I’ve ever met in my life.Anytime there was something that was said to him, whether it was a correction, even if we’re saying like good job, anything like that it always got a ‘Yes Sir’ or ‘No sir’ response,” Word said.

Salguero’s time as a student at Pierce could not last forever, and  Sims helped progress his future by pushing him to get a scholarship at Bowling Green State University.

Salguero continued to play football, but also worked towards getting his bachelors in criminal justice.

Although he had always wanted to work in law enforcement, working with Sims as a coach has changed his perspective on what career he could pursue.

“But he’s definitely shaped my mind from high school to now, I’ve always wanted to be in law enforcement but now that I’m coaching it’s definitely opened another eye and I love this field that I never thought I would get into,” Salguero said.

Salguero has not lost his winning passion from when he was a player as  Sims described that thirst for a win he’s constantly bringing to the team.

“His effort is still 100%, he still has that passion to win,” Sims said. “He’s just so hungry for victory for Pierce, it reminds me of his playing days and it’s so exciting to have him there.”

Even though Salguero is a coach now, the learning never stops as he expresses the continuous learning he receives from the same coaches he had as a player, when working as a coach with them now.

“I’ve been around great coaches, they all bring different aspects of football that I’m familiar with, but it’s very different whether it be terminology, schemes, etc,” Salguero said. “They’ve definitely opened up another eye for me to see the game of football.”

Word also described the passion that Salguero has for the game and the non-stop learning opportunities he will take.

“He has so much knowledge of the game. He’s just a student of the game, so every day, every football game that’s on TV is a teaching opportunity for him,” Word said.

Football to Salguero is not just a game, but his life, and he describes how continuously throughout his life his schedule was and still is shaped around football”

“It (football) definitely impacted my life completely, when I was growing up I shaped my schedule all around football,” Salguero said. “And I still do to this day with football being my job now.”