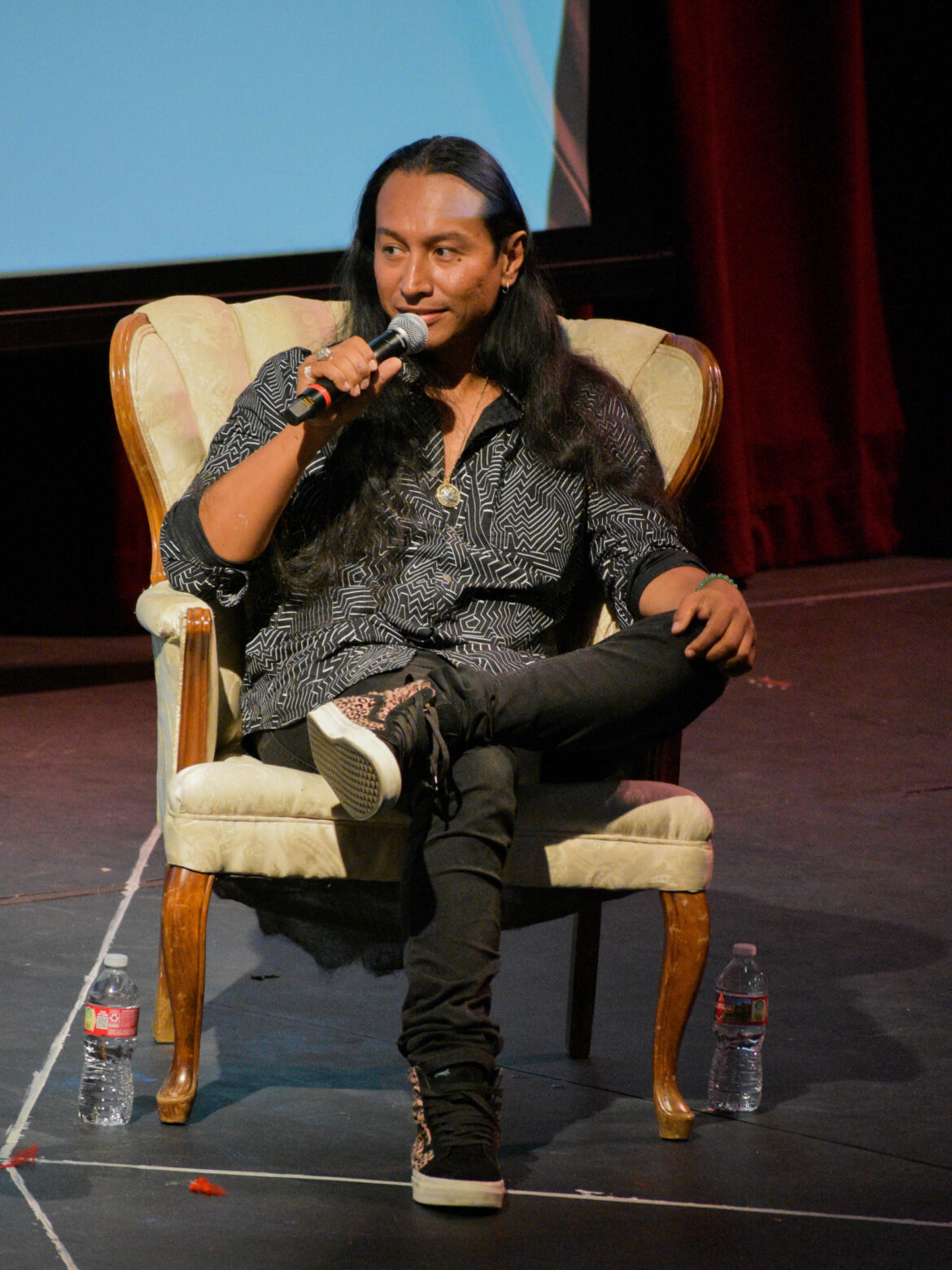 This event and the other three from the series were sponsored by Student Equity and Achievement Fund.

The next time you drive through the streets of Los Angeles, tilt your head up and look for murals. Not only will you  find yourself marveling at sweeping portraits of angels, rock legends and the everyday Angeleno who keeps the city running, there is a good chance that a mural you will see will have been painted by a Chicano from Boyle Heights.

A Los Angeles-based muralist spoke in a Q & A with a Fox 11 reporter as part of a series of events for Hispanic Heritage Month on Wednesday at the Pierce College Theatre.

Wearing leopard print Vans and long, jet black hair, Robert Vargas answered personal and professional questions from the half Portuguese and half Venezuelan TV personality and news reporter Gigi Graciette. Those in attendance were able to see what Latinos are capable of accomplishing by listening to a conversation between two legends within their respective professions.

A sixth generation Boyle Heights native, Vargas is no stranger to speaking at schools. Aside from traveling the world and getting commissioned to do murals and portraits for companies and celebrities, Vargas has brought friends to inner city schools to set up tools for kids who have dreams of painting.

Vargas provided inspiration to the athletes of Pierce, the artists, the Latinos and everybody in between by providing motivational advice, such as to be true and to be serious with themselves.

Graciette said that she celebrates being Latina year-round, and she reminded those attending that there was a time when it was not “cool” to be Latino. Now, she added, we live in a time when Latinos are “in”.

Vargas painted “Angelus,” a 60,000 square-foot  mural in the heart of Downtown Los Angeles on the corner of 5th and Hill Street. In the interview, Vargas said that Angelus is the world’s largest mural of a Native American. At 14-stories high, and that this piece was his way of taking back the land.

The mic was turned over to Professor Rovero to take questions from the audience.

Not only did Vargas give Pacheco tips on how to get started as an artist, but he also encouraged Pacheco to tag him on any work he posts on social media.

Pacheco said that he was not expecting Vargas to be so nice.

“It was not what I expected at all,” Pacheco said. “Vargas was so humble, but he was also so confident – you don’t see that in artists a lot.”

Vargas encouraged Pacheco to create and post his work on social media.

“I am very excited to be showing him my work,” Pacheco said. “I am a little nervous and a little anxious. It’ll be the first time I’ve ever posted my art on social media.”

Gemma Padilla, a Fine Arts Major, asked Vargas for advice on creating charcoal art. After the event, Padilla said that she appreciated the advice from the perspective of someone who is experienced and professional.

“He seemed pretty confident,” Padilla said. “It felt nice that he even acknowledged my struggles and didn’t just push them aside, like with other artists that I have talked to.”

Students from other majors besides the fine arts attended the event as well.

Isaac Martinez, an Automotive Service Technology major, said that he liked Vargas’ anecdote about a painting contest that he was disqualified from early in his career. Martinez liked the fact that Vargas wanted to know the reason why he lost a contest not because he deserved to win, but rather because he wanted to improve his skills.

“Everybody should just have that mentality—can’t stop, won’t stop,” Martinez said.

Dancers ceremony, as were the previous two speaker events. The nine dancers paid homage to the four elements of nature with a pre-Hispanic dance set to the rhythm of two huehuetl drums, a rattle and a conch.

The evening concluded with a catered Mexican dinner for all attendees to enjoy on the patio, including Vargas and Graciette.

Department Chair for Communication Studies Yeprem Davoodian, said that events like these provide a better school experience for the students, staff, faculty and community members.

“What a great turnout,” Davoodian said. “When I see someone inspiring students and who is actually humble, it motivates me to give back.”

Davoodian also said that these events with speakers are about learning new things.

“People say that you get into college to get an education,” Davoodian said. “It is not only about education, but it is also about exposure.”

There will be one more event for the 1st Annual Chicano/Latino Heritage Month Speaker Series on Oct. 13 featuring the East Los Angeles rock band Quetzal.