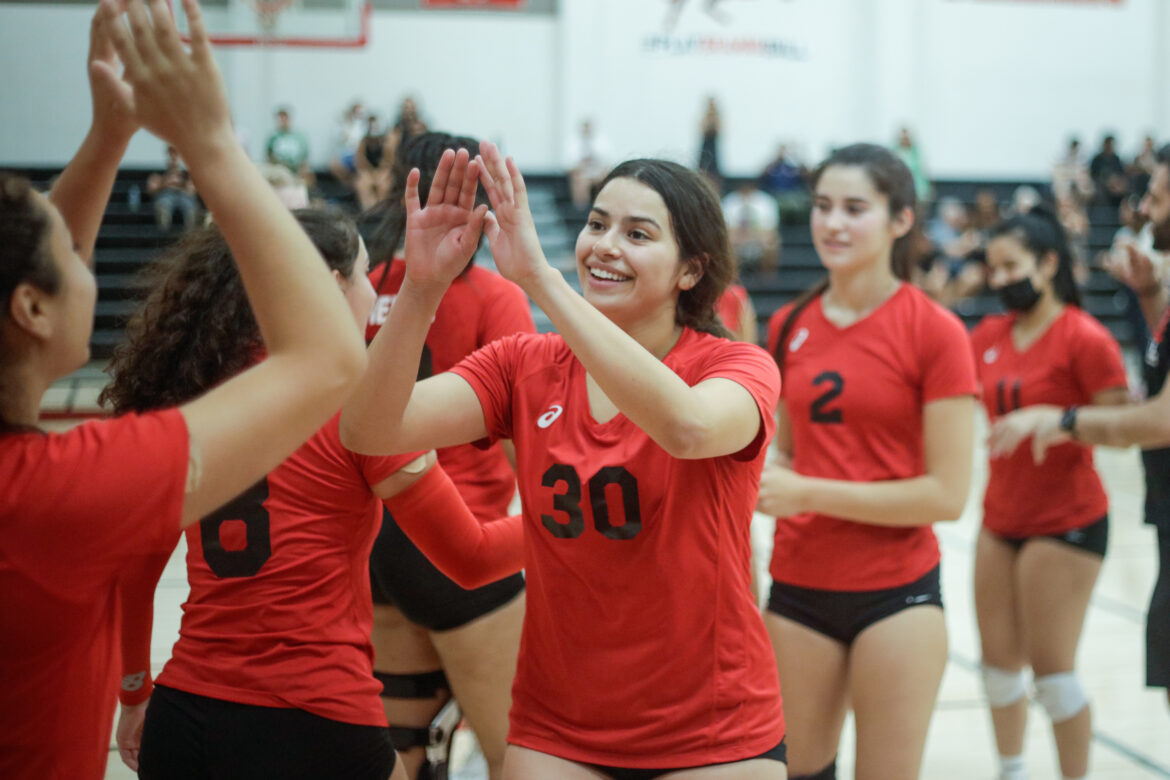 When players get injured, they opt to take some time to recover.

However, outside hitter Alejandra Velazquez decided to come back from her knee surgery instead of allowing it to put a damper on her career.

Velazquez said she’s always had high expectations for herself when it came to reaching her goals, but it was still a surprise nonetheless as she had recovered from a knee injury.

“I just think I’m working on it,” Velazquez said. “But it is surprising just because I have been coming back from an injury and I go, ‘I’m still not 100 percent’. But I am, in a sense, still proud of myself for coming back to the sport.”

Velazquez’s career with volleyball first began as a preteen.

“I’ve been playing volleyball since middle school at Campbell Hall and that’s when I started taking it seriously,” Velazquez said. “So I played in eighth grade and I went to a previous university (Avila University). Then, I got injured so I decided to come to Pierce.”

Velazquez said she liked the sport because of how fast-paced it was.

Head coach Edison Zhou said he thought Velazquez was going to do well from the moment they met.

“Before we met her, she sent me the highlight videos of her high school season,” Zhou said. “And I’ll say ‘Oh my gosh, the way she caught points. You can’t do that in a gym and she just had knee surgery’.”

Velazquez said she came back from knee surgery on Oct. 2020.

“I wasn’t sure if I wanted to play,” Velazquez said. “It would take a year of recovery.”

Velazquez was expected to take 10 months off, but ended up taking a year off.

Zhou said that she was supposed to kill the most out of anyone on the team.

“That’s why she should do that,” Zhou said, referring to her kills. “She’s the team captain. She’s supposed to kill the most out of us.”

Setter and libero Hilda Zahedi praised Velazquez’s dedication while also believing Alejandra would continue to play volleyball in the future.

“I feel like even from the day that I met her, the amount of commitment she’s put towards the sport even after being injured,” Zahedi said. “And the way that she’s been able to step back into it so quickly and progress so much, she’s definitely going to do well 100 percent.”

Velazquez said that seeing Pierce’s volleyball team’s track record in previous years made her want to come to be on the team.

“I didn’t know that they were really good at volleyball in previous years,” Velazquez explained. “But it was just super close and convenient. So I was like, ‘Why not?’.”

Velazquez said she has had mixed thoughts on continuing to play volleyball in the future, especially after an injury.

“I’m half and half,” Velasquez said. “I do want to continue playing but there are certain parts of me where I am scared to get injured again.”

Regardless of her decision, Velazquez said she is going to do all she can to continue playing because she loves the sport.

As of today, Velazquez appeared in 13 matches and three conference games. She made 11 kills and three strikes against College of the Canyons on Sept. 23.

Velazquez’s highest scoring games regarding kills have been on Sept. 9 versus Los Angeles Southwest College where she made 15 kills and scored 19 points.

For the season, Velazquez has 119 kills, five assists, seven service aces and 144 digs.

Velazquez will lead the Brahmas during the next home game versus Santa Barbara City College on Oct. 14. First serve is at 6 p.m.