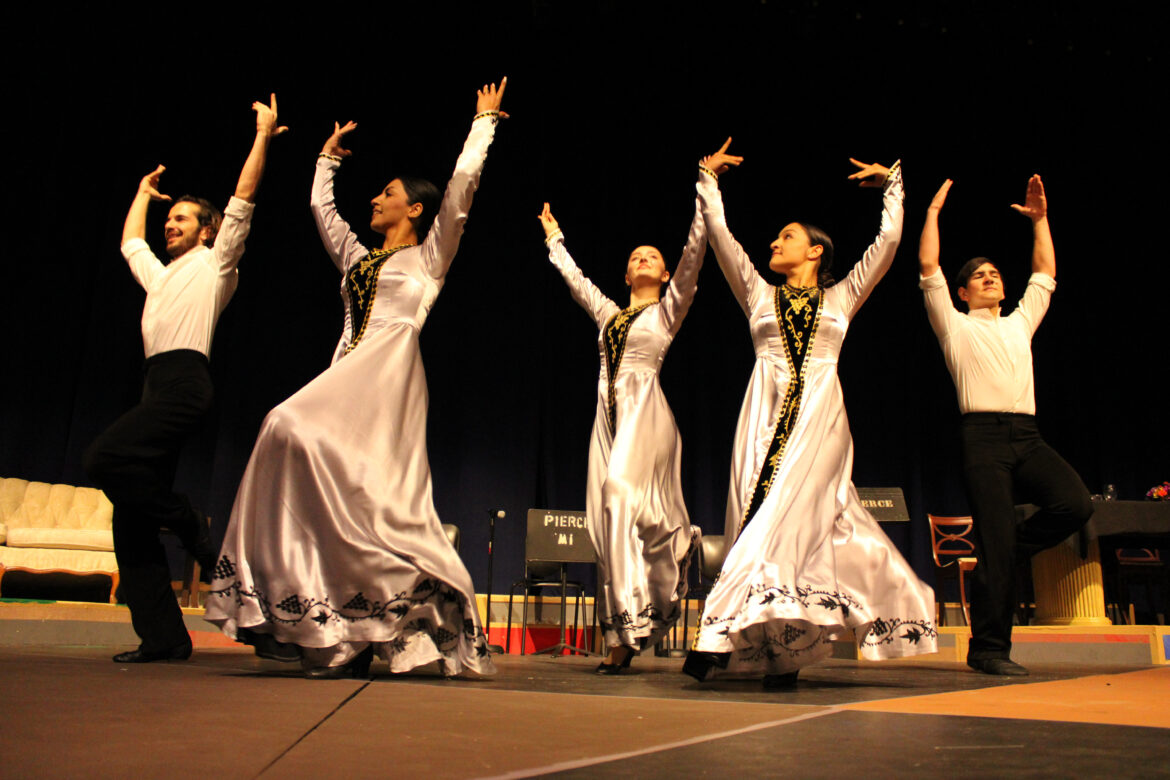 The Holy Martyrs Ferrahian Armenian School students and administration, Pierce students, faculty and staff, Director Talynn Kuyumdjian and the Armenian string quartet, along with members of the Heritage Dance Studio whose dancers performed at the very end, attended the event which lasted longer than previously scheduled from 1 p.m. to 3 p.m.

“Welcome everyone, family, friends, peers, colleagues, students, community members,” Davoodian said. “I was thinking about how we should start this off, so I’m gonna tell you a story and this story sort of goes along with the aspects of things that happened recently. So in 2017, professor Avakian and several other faculty members here got together with the ASA, Armenian Students Association, to do something for the Armenian genocide commemoration and we decided to plant a pomegranate tree.”

Davoodian shared how Pierce faculty and staff looked after the tree, and when the pandemic hit he said that he couldn’t find time to look after the tree. But as soon as he got back on campus he said that he wanted to see the tree and it grew under the care of an unnamed plant facilities staff who had been taking care of that tree during the pandemic, and was there during the commemoration ceremony and helped plant it.

“The point of this is that the person is an Armenian. That person came by and saw what was happening and was asked by plant facilities to plant the tree and it’s a part of his life,” Davoodian said. “And what I’m getting at is that we’re all here, whether you are Armenian, non-Armenian, wherever you are to celebrate customs, traditions and values and so forth.”

After Davoodian thanked members who contributed to putting this event together, ASA members introduced themselves and after them Kuyumdjian and the string quartet, violinists Angela Amirian and Anna Yegiazaryan, viola player Artashes Asatryan and Milena Mardanyan, who performed seven works of composer’s Komitas Vartabed, the founder of Armenian classical music.

They performed “Shogher Djan” (“Dear Shoger”), “Yerginkn Ampel A” (“Cloudy Sky”), “Spring” (“Garoun A”), “Noubar Noubar,” “Krounk” (“The Crane”), “The Red Shawl” (“Al Ayloughs”) and “Echmiadzin Par” (“Echmiadzin Par”) with grace and the audience cheered as their performance was emotional and moving.

Garineh also talked about the symbolic meaning of the Armenian flag and its ties to Armenian people and their national pride.

“Red symbolizes the Armenian highland,” Avakian said. “The Armenian people’s continued struggle for survival, maintenance of the Christian faith and Armenian’s independence. The blue represents the will of the people in Armenia to live beneath peaceful skies and the orange symbolizes the creative talents and the hardworking nature of the people of Armenia.”

Additionally, spoke about the impact of the Armenian genocide stating that 1.5 million Armenians were massacred with Armenia now having 3 million people, but there are more Armenians outside of Armenia is more than 8 million people.

Along with her presentation, Avakian performed Komitas’s “Hayastan” (“Armenia”), on the piano with vocalist Stephanie Keledjian where they were formidable together on stage.

Aguiar to address how she felt about the event along with Blumenfield who later on awarded certificates to Aguiar, Music Department Chair Wendy Mazon, ASO and ASA students and advisors, Kuyumdjian and the string quartet and Heritage Dance Studio.

“Good afternoon everyone, it’s good to be here celebrating Armenian Heritage Month,” Aguair said. “I’m looking forward to the food. My roommate in college was Armenian and her mom fed us everyday during the whole time we were in college and let me tell you it’s fabulous food. What a wonderful way to get introduced into a culture and it’s great to be here celebrating with you.”

Aguiar mentioned how Blumenfield had supported the Pierce community since the fire and she said she’s grateful that he’s here. Blumenfield also talked about being grateful back and how his experience with Armenia and learning about diverse cultures had been positive.

“It has been amazing to be a part of this cultural festival and I’m so grateful for the Armenian Student Association and the school for putting this together,” Blumenfield said. “I had some experience with Armenia and Armenian culture in the past. For many years I worked for (former) congressman Howard Berman in Washington and I worked to try to get the (Armenian) genocide resolution to vote in Congress.”

Blumenfield stated that he worked hard on the state assembly to try and get them to talk about the Armenian genocide and took action to stregthen the realtionship between Armenia and Los Angeles.

“And I always looked to Armenia as an amazing place. Such a historic place, not only the culture but the history. When I got to the city council in 2013, really the second month I was there, we were able to do a resolution specifically to declare Artsakh as an independent free republic. And consequently with the recent progression that was happening with Azerbaijan, we as a city took a very bold step in declaring Artsakh as a free republic and also condemning the actions and encouraging Congress to do more, and I’m very proud to be a part of that.”

Blumenfield also commented on what was happening in LA City councilmembers about the resignation of former president Nury Martinez.

“I’m always out there and we all want to be embracing different cultures,” Blumenfield said. “Our former council president, she just resigned, was caught on tape saying horrible things about so many different groups and othering so many people and not embracing cultures like we’re doing today. She said terrible things, anti-Armenian things, she said anti-Semetic things, and I’m happy that she has resigned and that we can move forward.”

The dancers from Heritage Dance Studio performed traditional Armenian dances while wearing traditional clothes. Their performances, some being modern, were uniquely choreographed, and by that time the high school students and administration of Ferrahian had to leave.

As they danced to their five numbers “Azgagrakan,” “Shalaxo,” “Suserov,” “Dance of the Gods” and “Kochari”, attendees were applauding until the very end, where they went out to feast.

Before getting lunch, Aguiar said that she thought the event went fabulous and how it’s great to see a community get together on campus.

“I thought it was absolutely lovely,” Aguiar said. “It pulls your heartstrings and it’s great to see our community come together. I was talking to some people and they saw each other, people that they went to grammar school with, so it’s a very tight community like many immigrant cultures where there’s the need to have that unity, that friendship and that sense of family— those are all part of every culture— there was music, there was singing, there was history, language and I thought it was fabulous.”