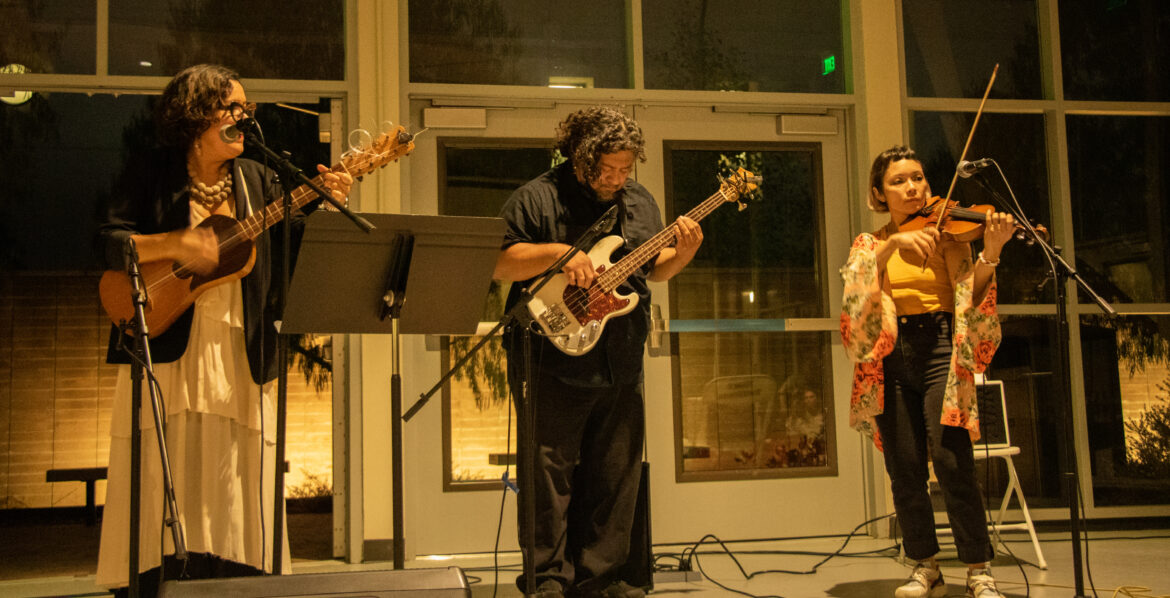 As Hispanic Heritage Month came to an end, Pierce College students, faculty and staff have come away from it learning about the cultural and historical significance of influential Chicanos, especially from those who stopped by the campus within the last four weeks.

Members of the ensemble Quetzal performed on Thursday at the Faculty & Staff Center to conclude the 1st Annual Chicano/Latino Heritage Month Speaker Series.

Quetzal is a Chicano rock band from East Los Angeles that formed in the 1990s and plays an amalgam of genres. They perform songs in English and Spanish.

Three members of Quetzal performed at Wednesday’s event. Professor, activist and lead singer Martha Gonzalez sang and played the jarana, a stringed instrument from the state of Veracruz, Mexico that looks like a guitar. Gonzalez also used the tarima, a wood-shaped box, to create rhythms by tapping her red dance shoes.

With her was the first Thai-American Grammy Award winner, Tylana Enomoto on violin.

On bass and guitar was composer, and session player Juan Perez.

Together, the three performed songs that told social, cultural and political stories. The songs were influenced by various music styles, including, but not limited to rancheras, Son Jarocho and rock.

Quetzal performed thought provoking songs with lyrics that speak to the Chicano experience of life in the United States. Those in attendance were taught the lesson that music is meant for activism and not solely to serve capitalism.

Since the complete band was not performing, Gonzales described their three-piece performance as very low-key acoustic. The way the music performance was engineered made the songs’ messages pierce throughout the building like a call for revolution.

Cesar Castro, music professor at Occidental College, was the sound engineer for Quetzal’s performance, and he was responsible for the effects of the sounds of Gonzalez’s vocals and Enomoto’s violin. Originally from Veracruz, Mexico, Castro said that he met Gonzales, Perez and Enomoto almost 20 years ago, and he used to play in the band as well.

“Doing the engineering was not only a pleasure, it was an honor,” Castro said.

Chancellor of the Los Angeles Community College District Francisco C. Rodriguez was in attendance on the concluding night of the speaker series. Rodriguez said that activities such as Quetzal night are statements of affirmation that heal and support efforts to become antiracist and to become more justice centered.

“Some of the music that we heard tonight challenges our sensibilities and our comfort zones,” Rodriguez said. “It causes discomfort, but I believe that in that discomfort comes change.”

Rodriguez gave a speech where he commended Chicano Studies professor Angelita Rovero for putting on a speaker series that will lift and elevate the Chicano diaspora.

Quetzal also showed a video on the projection screen that showed footage of one of their music projects from earlier in their career.

The event concluded with a Mexican buffet on the patio. Guests enjoyed rice, enchiladas, chicken, meatballs, beans and rice with a choice of horchata, hibiscus or lime drink.

“I read Gonzalez’s book when it came out in 2020, and I probably adored her since 2019,” Reyes said. “I love the way that she created this art activism that understood her and understood other people.”

Some guests of the show could be seen with copies of Gonzalez’s book “Chican@ Artivistas: Music, Community, and Transborder Tactics in East Los Angeles”. With the book, Gonzalez’s messages may continue to ripple through the minds of Pierce students and educators long after the event will have concluded.

The event also included a dance by Mexicas en Aztlan dancers to the beat of two drums, the sounds of conch, and the jingles of their ankle bells.

The month-long event that featured acclaimed speakers was made possible with coordination by Rovero of the PEACh Department (Political Science/Economics/Administrative Justice/Chicano Studies) and M.E.Ch.A.