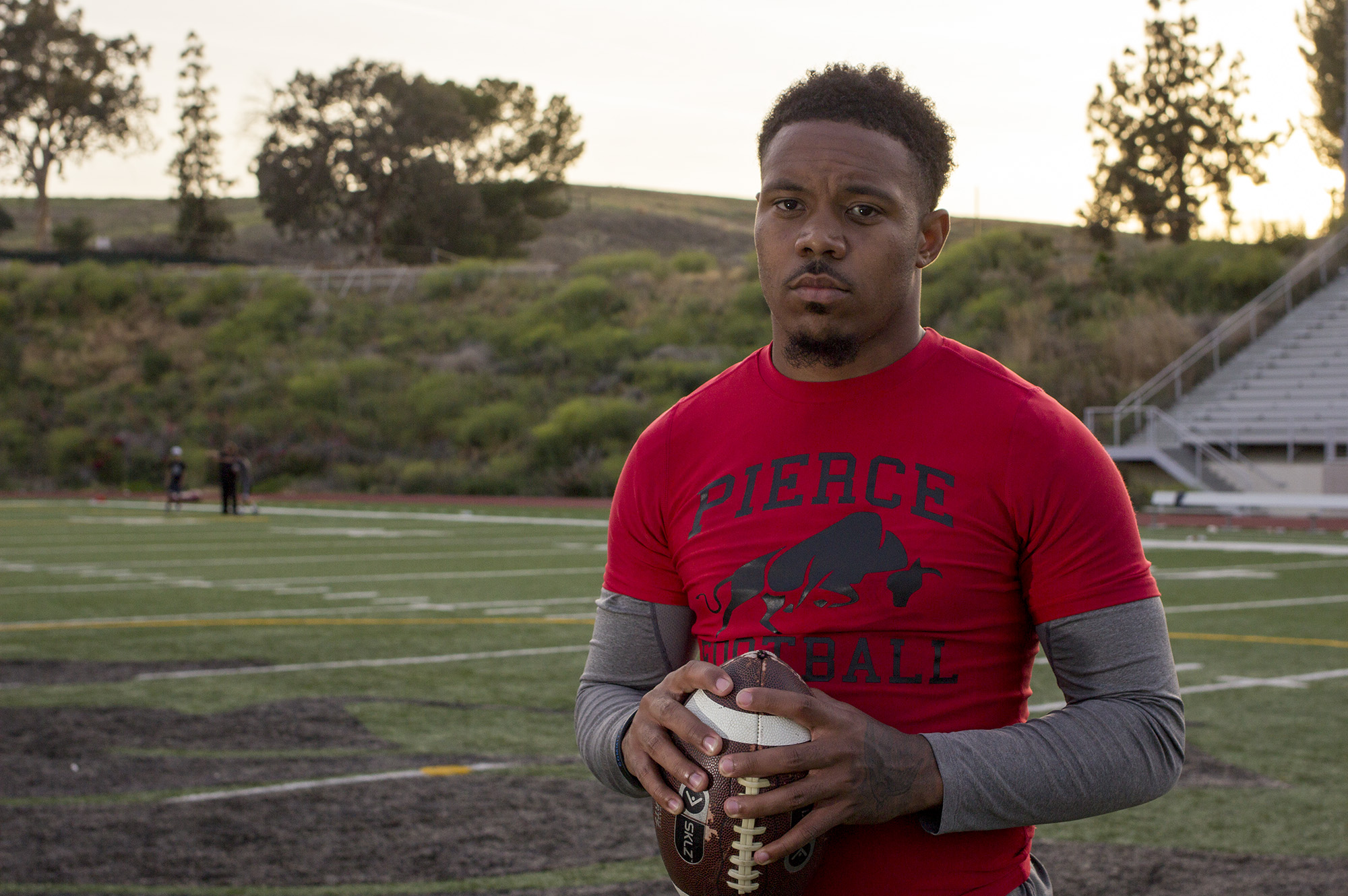 His feet tap the ground like a salsa dancer while at the same time working under duress as if there are bullets flying at him, making sure he never stops moving.

As he goes through the drills, with one quick burst he is off and running, knowing what is at stake this year. Not just for himself, but the family he has left behind to live out his dream of being a star athlete and maybe even someday getting to play in front of thousands of screaming fans in a packed stadium.

De’Shawn Jones is going to be carrying the torch this year for Pierce College. Jones, a native of Mt. Holly, NJ, has now grown into the kind of player the Brahmas have hoped he would become. A dynamic running back that not only punishes linemen whenever he hits a hole, but one that also has the ability to quickly burst outside, turn up field and leave the opposition in the dust.

Jones is a year removed from a season where he helped Pierce become one of the best offense in the state last year. Jones is ready to make a bigger impact this upcoming season with a much larger role to play in the Brahmas’ schemes. Despite only putting up 302 yards during the season, he was an all-purpose force averaging 27.5 yards a game.

Pierce offensive coordinator Jason Sabolic has marveled at Jones’ physical ability and thinks that the upcoming season will be the year when Jones reveals his true potential.

“Whenever I’m explaining to college scouts about De’Shawn, you can feel him running behind you,” Sabolic said. “If you were to have your back turned and you were to see him coming from behind you, you can literally feel him behind you. It’s an intangible that you are not going to find very often.”

Jones has undergone a lot of maturing in the process of trying to becoming a player that defenses fear. At 18 years old, Jones was 2,738 miles away from home and was unsure if he would be given a chance to prove his worth as a legitimate player.

“It is tough at the beginning but this opportunity and experience that I have had is unforgettable,” Jones said. “The things that I have been able to see and go through and I don’t regret anything. This experience has made me who I am and a lot of things humble me now as well. I just want to work hard so my family can be happy and just one day make it.”

By making it, he means getting a scholarship at a four year college or university. According to Sabolic, it was taking a year off and grayshirting that helped strengthen Jones’ development as a player. Grayshirting meant that he could practice and participate in training with the team but not be allowed to play. Jones couldn’t play, but that didn’t stop him from working.

Jones is now trying to take himself and Pierce to the level that they were before when they won the 2013 American Division Bowl championship. With all the physical ability in the world including being able to run a 40-yard dash in 4.4 seconds, he is still growing as the Brahmas enter spring football. Enter new running backs coach Cordell Landers, who has been working with Jones to make him a sharper running back.

Landers has been introducing Jones to brand new drills. No longer just basic footwork drills on speed and agility ladders, but being able to stay low, and utilizing and getting through small gaps in the defense.

“With Landers it is about falling nine times and getting up ten,” Jones said of his running back coach. “But he pushes me hard and helps me get to where I need to be and I’ve needed that this spring.”

Landers has only been a part of the Brahmas coaching staff for three months but he is already touting Jones not just for his skill, but for his passion and character as well as his ability to take instruction.

“De’Shawn is one of the best running backs I’ve had in the past six years in coaching football,” Landers said. “He’s a kid that you don’t get to coach every day. I like his heart and I like his ambition. His willingness to be coached and to be pushed to the hardest and fullest extent and his attitude is what separates him from others.”

With Jones’ growth and maturity, the Brahmas are not just expected to compete but are a favorite to win another championship.

He is older, he is wiser and he is stronger. Jones is exemplifying what has made Pierce College’s football program so unique in the past years. Taking athletic, but often raw, athletes and turning them into players worthy of being selected to play at the Division I level.

Since 2010, 81 Pierce football players have gone on to play at four year universities. Forty-nine of them have played or are currently playing at Division I schools.

Jones hopes to continue that trend.