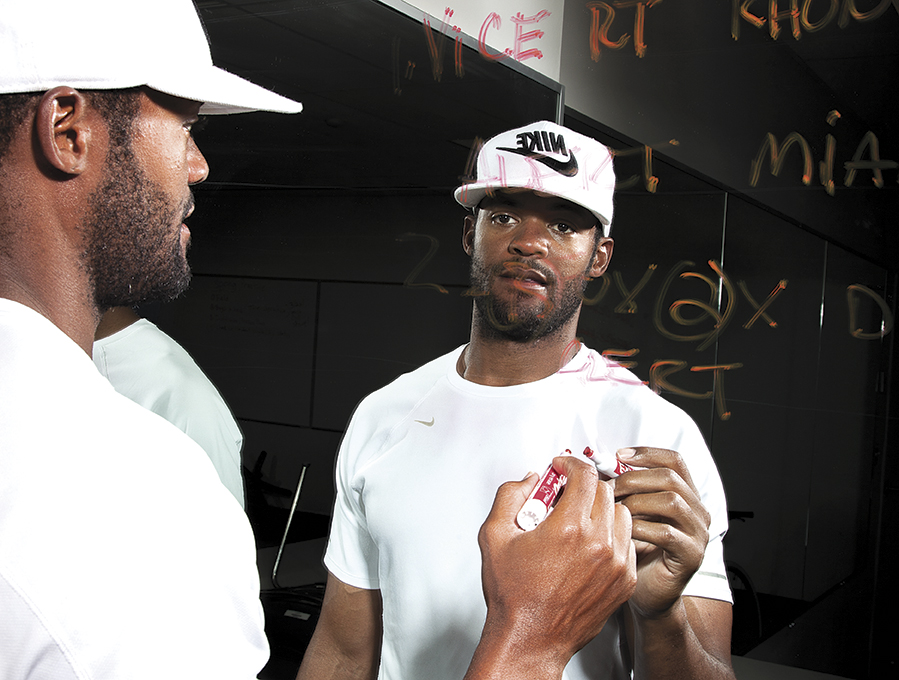 Getting drafted by an NFL team is a long shot, even more so if a player doesn’t come from a major university. But there’s a new coach at Pierce College who knows exactly what it’s like to go from a small school to playing on Sundays.

Matthew Hatchette graduated from Langston University, a Division II school in Oklahoma, and played in the NFL for six years. Hatchette brings his professional experience to the Pierce football team as the new offensive coordinator.

The former wide receiver was drafted in 1997 in the seventh round by the Minnesota Vikings. He played three years for the Vikings before he played for the New York Jets and Jacksonville Jaguars. After he retired from the NFL in 2003, Hatchette moved to Los Angeles and began teaching football camps and local high school teams.

“I pretty much got into the high school football portion of coaching, and since then it’s kind of evolved,” Hatchette said. “Now this opportunity came up through some friends out here at Pierce while training some high school kids. I decided it was a good opportunity, so I took the position.”

This will be Hatchette’s first stint as a college football coach, as he mostly teaches off-season camps for Nike and Elite 11, where he works with some of the top high school players across the nation.

“That kind of gives me a widespread view of the talent across the nation on this level,” Hatchette said.

Last semester, Hatchette trained about ten Pierce football players alongside Terrell Owens, a wide receiver and six-time Pro Bowl selection, and a few other NFL players. Sophomore wide receiver Wendell O’Brien, is one of those players and is still being trained by Hatchette and Owens.

O’Brien said Hatchette has a lot to teach the team. The football team struggled last season with a record of 3-7, and most of the coaching staff will not return for the 2015 season.

Athletic director, Bob Lofrano said regardless of Hatchette’s NFL experience, he hopes the new offensive coordinator can bring some knowledge, caring and understanding to deal with players of this age as long as the team buys into the process.

“I think (the team) has to buy into what the new coaches are trying to teach,” Lofrano said. “They have to buy into the system, whatever that system is.”

Hatchette began playing football at an early age and said he loves everything about it.

“Oh, it’s in my blood. It’s embedded in me,” Hatchette said. “Ever since I was 5 or 6, I was at home jumping over the couch with the ball in my hand and scoring touchdowns like I used to see Walter Payton do on Sundays.”

After high school, he began to understand what football had taught him so far, and what it did for him as a person in terms of building discipline and determination. Hatchette said it kept him focused through his life path, and that it all became possible through football.

“I think that’s when I realized it was more than just a sport,” Hatchette said. “I’m just trying to teach life lessons through football to these young men, but for myself it’s just embedded in me.”

“He asked if I might be interested and I was like sure, I’ll look at the opportunity. Then from there it kind of evolved with talks with head coach Sabolic and it kind of went from there.”

Although Hatchette wasn’t part of the coaching staff last season, he knows what adjustments need to be made for this year’s team and wants to make sure players are held accountable.

“I think it goes back to the discipline and the team chemistry and team character,” Hatchette said. “Things that are important.”

Last season had nothing to do with Hatchette, but he knew the team was a little bit undisciplined.

“Players doing their own thing and not being held accountable,” Hatchette said. “I think those things have to change and if those things do change then you’ll see the product on the field change as well.”

Hatchette said there’s one coach in particular that taught him the most about the sport, and who he plans on using some coaching philosophies from.

“Dennis Green is probably the best coach I’ve ever had in my life,” Hatchette said. “I think it’s just from the point of view of being fair, number one. Second, I think it’s from his point of view as letting everyone know where they stand at all times.”

Growing up Hatchette sat in front of the television on Sundays,watched game after game and took down different stats. But when he go to the NFL, he admired how teammate and fellow receiver Randy Moss played the game.

“Moss he didn’t have to do things that a younger, not so talented player like myself had to do,” Hatchette said. “So I had to see how he had to differentiate things to learn. He would never have to catch balls in the offseason because he had such natural hands.”

But Hatchette doesn’t only want to win this season, he wants to share life lessons with his players as well.

“There’s three things I think that are the most important. If a kid calls you in three to four years and asks you for a reference for a job, if one of the kids calls you when they get married or have a kid, and if a kid calls you when you get sick or later on in your life when you get old, if one of those players calls and if I have one, two or three of those things from a kid, then I will be successful,” Hatchette said. “If I get one of those things, then that also equals 10-0 in my book.”

He plans to teach the team his offensive philosophy, keep things simple and work on the details to perfect them. He believes if the players can do that, the team will be successful.

“Do I want to win every game? Yes,” Hatchette said. “Do I want to win championships and all that stuff, that’s an absolute yes. But I also think at this point of these kids’ careers, there’s life lessons that are more important than the actual sport.”