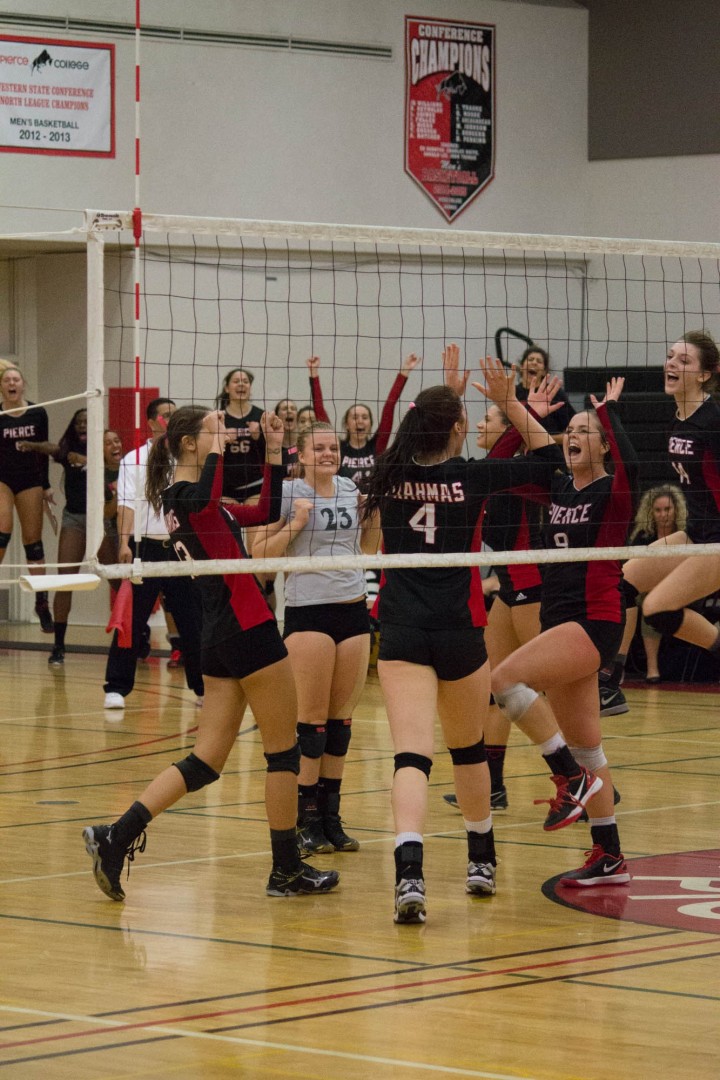 Pierce was first on the scoreboard, quickly gaining a 2-0 lead. The Brahmas were aggressive in the first set, despite losing to the Pirates.

“We are a very under-sized team. We play like that every match so it’s not like it’s something new. We were number 20 in the state, [and] they’re number one,” Lyans said.

The Brahmas and the Pirates have a mixed history. Lyans is a Pierce College alumni who played on the volleyball team while attending. In addition to having played for Pierce, Lyans also coached the Brahmas for some time.

“We know a lot about them because I went here, because I played here, I coached here with Nabil for many years so I have very strong ties to the program. I know what they do here, I know the style of volleyball they play, and it’s easy to talk about it and work on it at practice,” Lyans said.

Nabil Mardini, head coach of the Pierce College volleyball team, wasn’t surprised by the ferocious nature the Pirates displayed when they won the first set.

“Everybody’s going to come hungry against the Brahmas. When you’re number one in the state what do you expect?” Mardini said.

The second set brought about a true back-and-forth between the two teams. The Brahmas managed to establish dominance before an overturned ruling from the main referee gave them the set at 25-17.

After losing its undefeated streak, the Brahmas have been waiting to get back on top.

“After Wednesday’s game, the resilience, the bounce-back [they’ve shown]…they kept looking for a way to win. The girls stuck to the game plan, we knew what Ventura was capable of doing,” Mardini said.

“We started off really slow and then I think in the second game we woke up and that’s why it showed in the score,” Dartis said, “We wanted to come back strong from that just to show that we’re not phased by that loss at all.”

The Brahmas finished off the third set without a hitch, scoring a tight 25-17 lead. Darrin Rice, a sophomore and team libero, dished out several aces and good serves in general.

“It’s definitely not the results we were planning on. We were hoping to take them in three [sets] but you know a win’s a win,” Rice said. “We definitely came back ready to win. We never want to feel the feeling we felt on Wednesday again so I think we came in ready to work hard.”

Kristen White, a freshman and outside hitter played through a sprained ankle.

“It was a good match. I sprained my ankle on Sunday, it’s really bad…I was out Monday. I didn’t get to serve Wednesday, and I’m number four in the western conference for serving so I wanted to come back strong and really bring it to the court,” White said.

The desire to win drove both teams into a 15-15 tie in the fourth set. The Brahma’s defense resembled a brick wall, and the Pirates returned heavy fire.

In the final moments of the fourth and final set, the score was 25-24 with Pierce needing one last point to end the match. The Pirates failed keep the ball alive on a spike to end the game, and the Brahmas celebrated the team’s hard earned victory.

Surprising still is the fact the former number 20 team in the state pushed Pierce into four sets before losing the game.

“That’s the number one team in the state right there. They’re number one, and we just did that to them,” Lyans said.