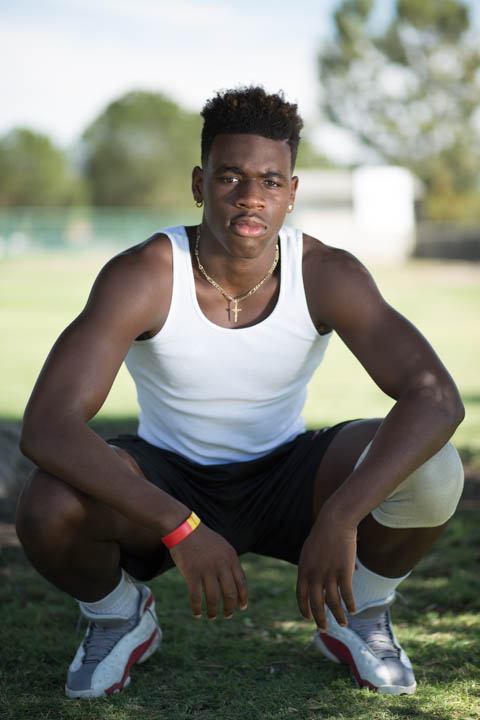 Being homeless in a new city with your family 2,600 miles away could discourage anybody, but Anthony Happy, 19, doesn’t let his circumstances bring him down. He carries that same enthusiasm that his name suggests to the Pierce football team.

“There were weeks at a time that I was homeless, literally living out of my car, brushing my teeth and taking a shower at the school, because I didn’t have any place to stay,” Happy said. “Many times it could’ve been easy to take the next flight home to Maryland. Honestly, I’ve seen a lot of junior college football players do that.”

That wasn’t for Happy. The Columbia, Maryland, native is living his dreams of playing for a school in California.

“California’s just always been a dream; why not live in Los Angeles and play football at the same time,” he said.

Before his journey to California, Happy had a rough upbringing in Maryland, witnessing the effects of alcoholism and domestic violence at home.

“Growing up and witnessing domestic violence at a very young age and just seeing my mom and dad split, as a child, that was the main thing that impacted me growing up,” he said.

All this adversity fueled his desire to better himself as a man.

After being kicked off his high school football team in senior year, Happy saw his hopes of playing football dwindling.

“I was immature and self-centered, and I also had family problems. I was missing practice all the time. I ended up getting kicked off the team, so I had to go the junior college route,” Happy said.

Knowing there weren’t any junior college football teams in his area, he made the decision to seek out of state schools, specifically in California, where his dream school USC was located.

He began to email several potential schools but wasn’t having much luck. While playing NCAA football against his brother, with $10 on the line, Happy remembers being frustrated with his phone going off in the kitchen. Assuming it was one of his friends and finally answering after the third call, to his delight it was Moorpark College.

Moorpark had it all figured out for him, and were ready to welcome him to the team. Although he had been in contact with Pierce, Moorpark was showing more interest. The next step would be convincing his parents.

It was an 8-month battle from when he was kicked off his high school team to finally convincing his parents to let him go to California. Happy came out to California by himself at 17-years-old.

Happy wasn’t content with his role at Moorpark, which lead him to his transfer to Pierce. He called the Jason Sabolic, the Pierce football coach, and was welcomed to join the team.

“I think he’s a great player. He’s a dual position kind of guy. He can play quarterback, he can play receiver, and we hopefully look to get him back healthy,” Sabolic said, referring to a knee injury suffered by Happy earlier this year.

The struggles continued for Happy, and at times he had no place to stay the night. With luck that has changed and he is no longer homeless.

“Going to Pierce helped me mature as a man, because I had to do a lot of things on my own,” Happy said. “Every time I look for inspiration, I look at what I’ve overcame and been through in my life and that just inspires me to go even harder and I look at what I want to become in life.”

Currently nursing a knee injury, Happy hopes to return to the lineup to continue his quest to play for USC.

“It’s really unfortunate,” teammate Corey Wright said. “He hasn’t suited up yet because his knees have kind of been affecting him right now, but when he gets healthy we’ll be playing together.”

“Pretty sure he’s going to be a pretty effective guy whenever he gets back,” Wright added.

He is a first generation African American and has decided on international business as his major. Happy’s family is from Cameroon, Africa. Alongside his football goals, he hopes to one day be an activist. This was inspired by a trip to Africa, two summers ago, where his eyes were opened to an entire different reality than the one here in America.

The college sophomore intends to one day fund an organization that will bring African Americans back to their home countries to do volunteer projects for the improvement of the communities their families left behind.

“Most African Americans in America don’t even know the struggles and trials their cultural background goes through back home,” Happy said. “You might go to any country in Africa and they think America is like a dreamland.”

He wants to change that mentality so that people will want to move to Africa one day too.

He hopes this mentality will extend into other developing countries, and that other races understand the message. According to Happy, everyone in the world has potential to make change.

“As big as I want it to be it’s going to need money to fund it so that’s why I have hopes and dreams of making it to the NFL.” Happy said.