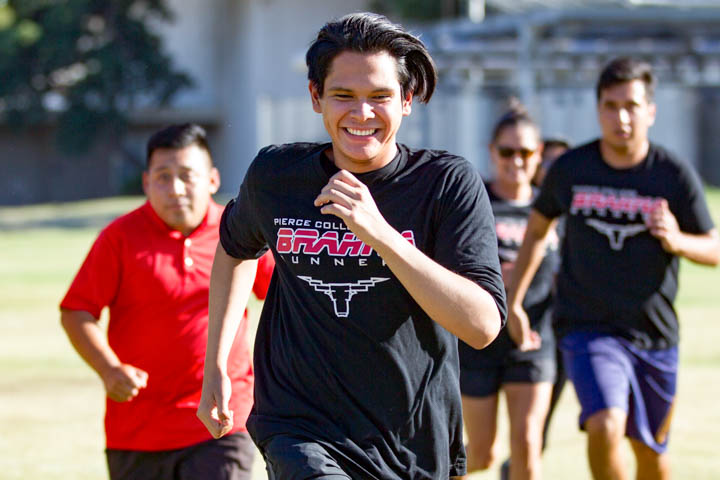 The Brahma Runners, who do more than circuit sprinting, hope to speed their way to cross country dreams.

Pierce College’s running club is led by president Edgar Hernandez, 21, who says that the club meets every week for community, fun and a bit of cardio. Hernandez said the club was made to build a community for runners.

Hernandez said the group may have started to produce a cross country team, but it has evolved over time. But Hernandez said he is excited about the prospect of making a team.

The club’s next goal is to participate in a half marathon. Members also compete in track and field events at other schools. Hernandez said that these events are good for the younger runners in the group.

“We get to see other schools and what a college runner looks like,” Hernandez said.

Club founder Sergio Barboza, 21, wanted a community to run with. He started at West Los Angeles College and was recruited for the cross country team, but said he didn’t enjoy the experience. He came to Pierce, said said he missed the community.

“I missed the feeling I had in high school of people coming together, running, pushing each other and getting offered to compete,” Barboza said.

Barboza said the club has about 20 members and a core group of 10. He hopes a Pierce cross country team will be formed. In the meantime, he enjoys what the club has become.

“I’m happy just having people wanting to run with each other,” Barboza said.

Running is not the only thing club members do, Barboza said. They also play volleyball or soccer and participate in local events.

Barboza said the events are open to everyone that wants to participate.

“If they want to show up, they are more than welcome to come,” Barboza said.

“Now everyone is pitching ideas on what we should do and how we should run,” Barboza said.

Barboza said that every day is hosted by a club member that decides what the route will be run.

“I talked about my experience running, and they talked about how they ran in high school and wanted to have a community of running here on campus,” Armenta said.

Armenta ran cross country, and said she was interested in helping form the club. The idea of forming a cross country team has been mentioned to her from people outside of the club.

“I get students that are interested in being part of a team,” Armenta said.

Armenta said that some students are worried about joining the club because of it being called the running club.

“We are more recreational, we do a lot of social things,” Armenta said. “We still do run.”

Armenta is trying to get other athletic clubs in contact with the Brahma Runners so that there are more channels. She said that some club members are part of other clubs, that allow access to the gym and other facilities on campus. She is trying to form a partnership with the swimming club to allow for some pool time.

Club Representative Ruth Murillo, 19, said she was excited to have a community to run with after high school, but she said that it isn’t all fun and games.

Murillo said they run the cross country track, and it is no laughing matter.

“That will really destroy you, but it will define you,” Murillo said.

Murillo said she is looking forward to having a cross country team, but is annoyed with the delay. She said it is due in part to not having enough people to form the team and campus bureaucracy. However, Murillo said, it is nice to have the club.

“We just want a nice environment between us,” Murillo said. “All of us, we are just so happy.”