Natalie Miranda, samantha bravo" />
Skip to content
You are Here 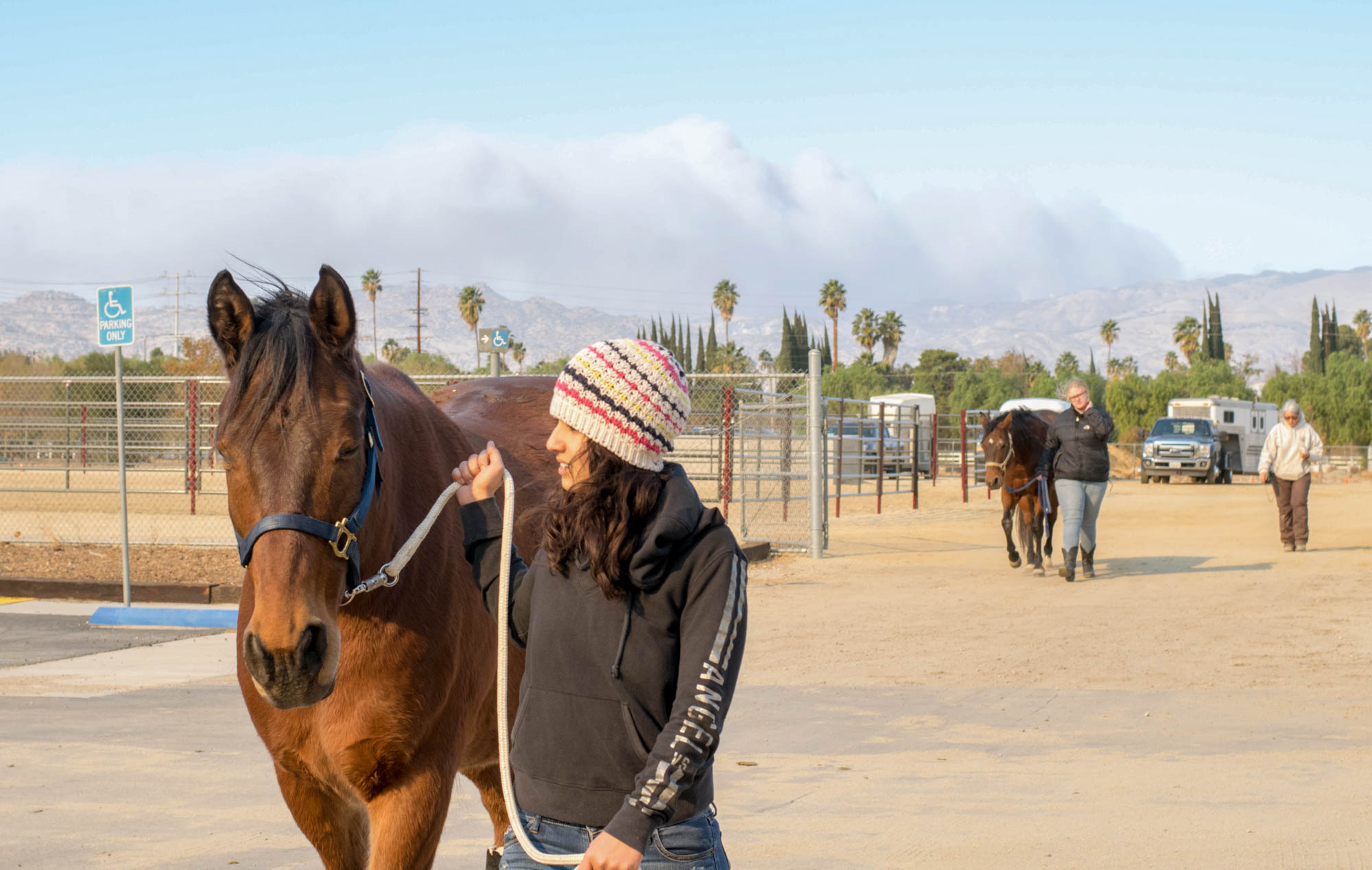 Owners found safety for their horses and large animals in the Pierce College Equestrian Center evacuation zone, escaping danger from the fire that broke out in Sylmar at 4 a.m. on Dec. 5.

The Los Angeles County Fire Department released a statement on twitter, letting residents affected by the fire know where they could evacuate their animals. One location they recommended was at Pierce College.

The Equestrian Center is a temporary boarding facility for evacuated animals in mandatory evacuation zones. The Los Angeles County Animal Control officers and emergency response team’s focus was to board large animals such as horses and donkeys.

Maximum capacity holds about 120 animals, and there are 62 horses currently boarded at the facility.

“The facility is almost full,” Sakapjian said. “It happened within an hour. They could take them back to Burbank, but if they’re in crisis, we never send them away.”

Sakapjian said a farm owner lost some of her horses due to the brush fire.

“Out of 50 horses, six made it out,” Sakapjian said. “It was really dry, all the dry causes fire. Luckily for Pierce College, we work with the county and animal control, and we have specific protocols and use specific equipment.”

Sakapjian said the Equestrian Center is still accepting large or small animals, but they are almost occupied.

“Horse people, they all just come together,” O’Connell said. “There are a lot of horse owners that don’t have trailers, and we try and help out everyone that doesn’t. Everyone tries to come together and coordinate. It’s just what equestrians do.”

O’Connell said she woke up to a phone call alerting her about the fire.

“I got a call at 4:15 in the morning that the fire was coming down the canyon, and our horses are up Little Tujunga Canyon,” O’Connell said. “Today was pretty scary. There were embers, there was fire, and it was right there.”

Horse owner Lisa Farrah said she rushed to evacuate her 100 percent purebred Friesian horse after receiving the call from the ranch that boards her horse.

“I literally went flying past parked traffic and went into ongoing traffic, because I know how fires can escalate,” Farrah said. “I saw the fire when I was driving to the ranch. It was literally at the front door.”

Gonzalez said their goal is to make sure everyone has somewhere safe to go, providing food, water, shelter and around-the-clock care to evacuees. He said residents in mandatory evacuation zones have first priority to board their animals.

“We are trying to make it as painless as possible, especially with large animals,” Gonzalez said. “We all know that they get nervous, especially if you have horses that are not used to going in and out of trailers.”

Gonzalez said the Equestrian Center will be open until the “all clear” is given.

Carly King, a horse owner, was told by her ranch manager to evacuate to Pierce College. King said the Equestrian Center would provide her with food and water, however, she brought her own to be safe.

“It’s one of those things where you never know, so you want to grab your own stuff while you have the opportunity,” King said. “I believe I’m going to be leaving my horse here overnight as long as the evacuations are in place.”

Updated at 10:30 p.m. : Most animals in Pierce’s care are in stable condition. Three horses are recovering from heavy burns and are being treated, registered Veterinary Technician Kami Bohorquez said. Over night animal care technician, Don and Pearl, along with other helpers are counting the many animals at Pierce that were evacuated for the fires. According to Animal Care Technicians, Pierce has horse stalls available outside. Information gathered by Jose Herrera.