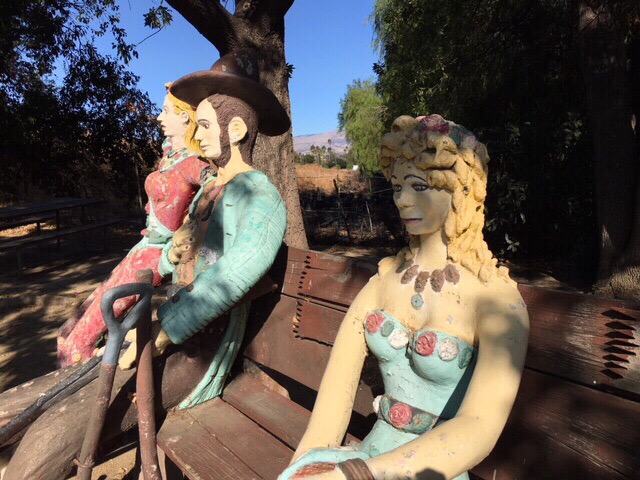 In the back of Pierce College, located between the horse stables and the agricultural science building, lies a fanciful world of cowboys and indians, saloon girls and pioneer mothers; most in casual stance, a few in action poses, and all part of a strange American Folklore exhibit called “The Old Trapper’s Lodge.”

However, while some think the works in the exhibit are playful, a number of students are concerned that they debase American Indians as bloodthirsty savages and women as sexual objects.

One construction “Pegleg Smith Fighting Big Bear” depicts a large Indian attacking a smaller white man splattered with blood. Another statue called “Kidnapped” depicts a half-naked white woman being abducted by a darker Indian standing on a pedestal of heads.

Blatigenous (Black, Latino, Indigenous), a pan-ethnic campus club, brought the exhibit to the attention of their Pierce club adviser and Chair of the Social Science, History and Philosophy Departments, James McKeever.

“These statues and displays are racist and misogynistic,” McKeever said. “We are a largely Latino campus, considering the mestizo nature of Latinos, mixed with a lot of indigenous blood, you can see how this can be very hurtful.”

McKeever said he has brought the issue to the attention of Pierce President Kathleen Burke, but has not had a detailed discussion with her. McKeever said she has been open to talking with students about the exhibit, but Burke may not have jurisdiction in this matter.

McKeever said that this semester has been a particularly difficult year for the school, and he hopes more attention can soon be given to the matter.

“We teach our students to be reasonable in the way we approach these things. What you want to do is go through the proper channels first. Sometimes when you give people the opportunity, they’re going to do the right thing anyway,” McKeever said. “We would ultimately like the exhibit removed.”

Despite McKeever’s wishes to see the statues removed from campus, he said that the process to do so may be difficult due to the exhibit’s status.

“The issue is not an easy call since the exhibit has an AB-393 designation, which gives it, and other Americana artwork in the state, an official historical position,” McKeever said.

Likening the matter to the removal of Confederate statues, McKeever asks, “Times have changed. Does it have to be on our campus?”

The college does not provide any funding for maintenance; instead, anonymous individuals reportedly provide upkeep to the statuary and surrounding landscape. After more than 30 years, the concrete on mesh displays are decaying and may meet their final fate with the elements.

The lodge was built in 1941 by trapper John Ehn (1897-1981), a fan of the colorful Old West and a self-taught artist. He created the statues and a boothill-type graveyard to promote his lodge in Burbank.

While the main buildings of the lodge were demolished in 1981, the surrounding promotional statues, tombstones and artifacts were salvaged and given to Pierce College, by whom, no one seems to know.

Today, many students are unaware of the location because it is generally not promoted and can barely be seen from El Rancho Drive, as it is hidden by trees and a chicken brooder.