Jessica Vaughan, Randi Love" />
Skip to content
You are Here 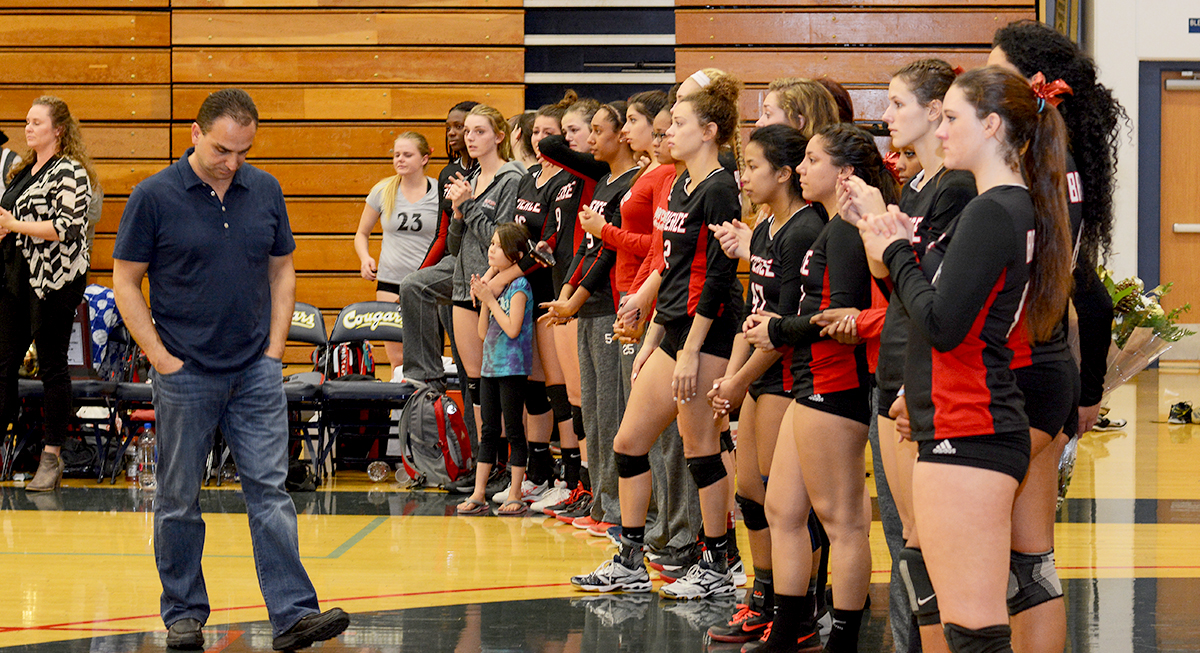 While the women’s volleyball team may have struck out in the playoffs, they won their 15th conference title with Nabil Mardini as head coach.

Despite his contributions, Mardini received an email from Athletic Director Moriah Van Norman, that said he will not be offered additional coaching or teaching positions effective Dec.15.

Mardini said he received the email at 4:51 p.m. on the last day of the semester. He said head coaches of other sports were informed prior to the email being sent.

“I did not respond to the email,” Mardini said. “I wasn’t blindsided, because I saw it coming. What’s really hurtful and what’s really inappropriate is you’re firing me or letting me go on a Friday via email. After 17 years of giving this college so much, you don’t even give me what I deserve, which is a face-to-face conversation.”

Former Athletic Director Bob Lofrano said that Mardini ran a successful volleyball program and left a mark not only on the campus, but also on the state.

“It’s a real blow to the college and a blow to the state in terms of losing the volleyball coach that brings all kinds of things to the table,” Lofrano said.

Lofrano retired from being athletic director on June 30, after he was told to re-apply for the position at the beginning of the spring semester.

Lofrano said he could not recall another team during his time as athletic director that compared to the academic success of Mardini’s volleyball team.

Lofrano said the women’s volleyball team won the state title and the State Academic Team of the Year in 2011.

“That’s what Nabil brought to his coaching, it was not only the on-the-floor excellence with three state championships, but he also brought the academic part,” Lofrano said.

Mardini has led the team to 15 conference titles, three state titles and three runner ups in his time with the program. Also, he was inducted into the Pierce College Athletic Hall of Fame in 2016.

Mardini said it’s been a journey for him and he feels personally attacked.

“Ever since Earic Peters came on board, it’s been nothing but very difficult on me personally,” Mardini said. “I hate to use the word personal, but all the signs basically, in the end, lead me to believe that this is a personal thing. For whatever reason it is, and I can’t quite put my finger on it.”

Mardini said he stood his ground even when he wasn’t given clear answers. He said that this may have played a role in his dismissal.

“When Moriah took over, they started applying a lot of district rules and policies and pointing the finger,” Mardini said. “They pointed the finger at Bob Lofrano and the other coaches, and it became more and more like ‘hey, you’ve got to be compliant.’”

Mardini said he was informed by Earic Dixon-Peters, vice president of student services, via email that he needed to meet with him regarding an athlete having the key to the gym. Mardini said Van Norman initially received an email from Jim Couch, women’s basketball head coach, about an athlete in possession of the key.

Mardini said Van Norman did not come to him directly to ask about the key situation. Mardini said it could have been handled differently and was told that this incident led to his firing.

Mardini said he allows one of his players to open the gym and setup before each practice. He said the player would leave the key on the whiteboard, and he would grab it when he arrived at the start of practice.

Mardini said the reasoning behind his termination was unreasonable. Also, he said he has similar feelings regarding the reason why former Football Interim Head Coach Jason Sabolic was let go.

Sabolic was fired for decorum violations, and administration have yet to comment further on the matter.

Mardini said based on conversations with Van Norman, he predicted that the working relationship wouldn’t last. He said the “incompetence” and the “unprofessionalism” of the administration was too much to deal with.

Dixon-Peters,  Kathleen Burke, college president, and Fernando Oleas, teacher union rep. have been contacted via email for comment, but have not responded.

Mardini’s replacement has not been announced. The story will be updated as more information becomes available.

Schleicher said he was unaware of the specific circumstances regarding Mardini’s employment as the head volleyball coach. However, Schleicher said there had been previous financial discrepancies within the Athletics Department.

“I do know in the past my division did have fiscal internal control issues with the Athletics Department overall, and we provided extensive training to the managers and coaches through AVP Larry Kraus and Bruce Rosky to curb potential cash and check irregularity issues,” Schleicher said in the email.

Schleicher said he doesn’t know if previous events have any effect on the current situation.

“Cash management, especially as it relates to potential conflicts of interest, are auditable issues that the college and district take very seriously,” Schleicher said.

An attempt was made to reach Burke and Dixon-Peters for comment, but Schleicher said they had been out of the office at the time of the initial request for information.

Athletic Director Moriah Van Norman said she had no comment about the situation.

Continued updates to the story will follow as new information is provided.

Nabil Mardini responds to comments made in the story.

To read more on the firing of Sabolic click here:

To listen to the documentary on women’s volleyball click here: