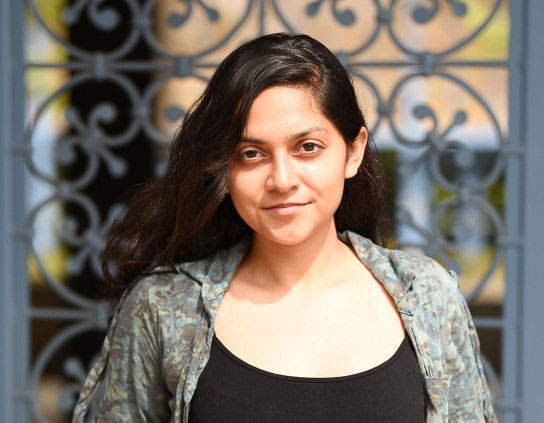 Running is usually considered a solitary sport, however Lisette Avila uses the activity as an outlet to socialize and make connections with people who share a common interest.

Whether she’s wearing running shoes or her cadet uniform, Avila is a leader in any element she is in.

Avila’s passion for running has led her to become the president of the Pierce College Brahma Runners Club. Avila said she found her enthusiasm for running when she needed something to help her overcome hard times.

In middle school, Avila first started running as a way to cope with the challenges she was facing in her personal life.

“I was going through problems at home that I just wanted to run from,” said Avila. “So, every P.E. class, I would run all the track before class started. Then my teacher saw me and said I should join Students Run LA.”

Avila attributes her current success to the support she has received. She said the person who has supported her running the most was her high school coach. She said that he encouraged her to never give up on herself and expressed that he believed she was stronger than even she thought herself to be.

Since coming to Pierce College in the fall of 2016, Avila said she also feels encouragement from her teammates in her club. She said being a part of a community of runners is something that helps her feel that she is not isolated at Pierce College.

“It feels like I’m not alone at this college because I know I have friends with one thing in common with me: running,” Avila said.

As the president of the Brahma Runners club, Avila said she must take on the responsibility of being a model for people to follow and aspire to be.

Susan Armenta, advisor for the Brahma Runners club, said that since becoming president, Avila has grown as a leader and has become an example for other students.

Armenta said that upholding a certain standard of dignity and demeanor are important elements in a leader worth following.

“I think her nature of being a cadet makes students look up to her,” Armenta said. “I think, that way, she’s been kind of able to be the role model just by being who she is.”

Avila has been a part of the Los Angeles Police Department Cadet Program since the summer of 2013. For five years, Avila said she has upheld the core values and philosophies of the cadet program. Because of this commitment to the organization, she has risen to the rank of cadet lieutenant.

Danny Gonzalez, a fellow member of the Brahma Runners club, said that Avila acts as the support system for the team.

“You can tell the passion she has for the club,” Gonzalez said. “She’s super supportive; if someone is not feeling well or someone’s not feeling included, she makes sure that gets addressed as soon as possible.”

Armando Mercado, another Brahma Runners club member, said that Avila’s consistent care of her teammates is one of the ways she supports the club. Mercado recalled an incident where, during a run, he suffered a cramp, and Avila was there within an instant to check if he was feeling okay.

Mercado said that Avila also takes accountability for the team while on runs.

“Sometimes she’s in front, and when we get to a light, she looks back and makes sure everybody is caught up,” Mercado said. “And if someone is behind, she’ll go back to catch up with them and run with them to catch up to everybody else.”

Gonzalez said Avila has inspired those around her even before she was voted in as president for the Brahma Runners club. Gonzalez mentioned a moment recalled by his team members where Avila gave a moving speech at the end of a running course. After the run, Avila talked about how running was more than just a sport; it was about running as a team and building a bond with the people who make the team.

Avila said that building a bond with the all the members of the Brahma Runners club is one way to make everyone feel included. Every other Friday, the club plans bonding activities to do outside of Pierce College.

Avila said activities range from trekking different hiking trails, movie nights or visiting a haunted place as a group. According to Avila, the purpose of these group activities is to bring all the team members together to have fun.

Armenta said that, as president, Avila has a responsibility to face problems as they arise. Armenta said that hse believes the challenges Avila is facing now pertain to the evolution of the club.

“There are newer faces and we’ve had some older faces in the club,” Armenta said. “I think making that transition to different and new ideas has been a challenge, but I think all club members are open to new ideas. Change is always good.”

Armenta also said that Avila is able to overcome these challenges because of how open she is with the club and how interactive she is with all of them. Armenta said that, regardless of the path Avila chooses to follow, she believes she will rise to the occasion and be a leader.

“Whatever role she takes on, I believe she will be a leader. A quiet leader, but I think by demonstrating in her actions, she will be a very powerful leader,” Armenta said.