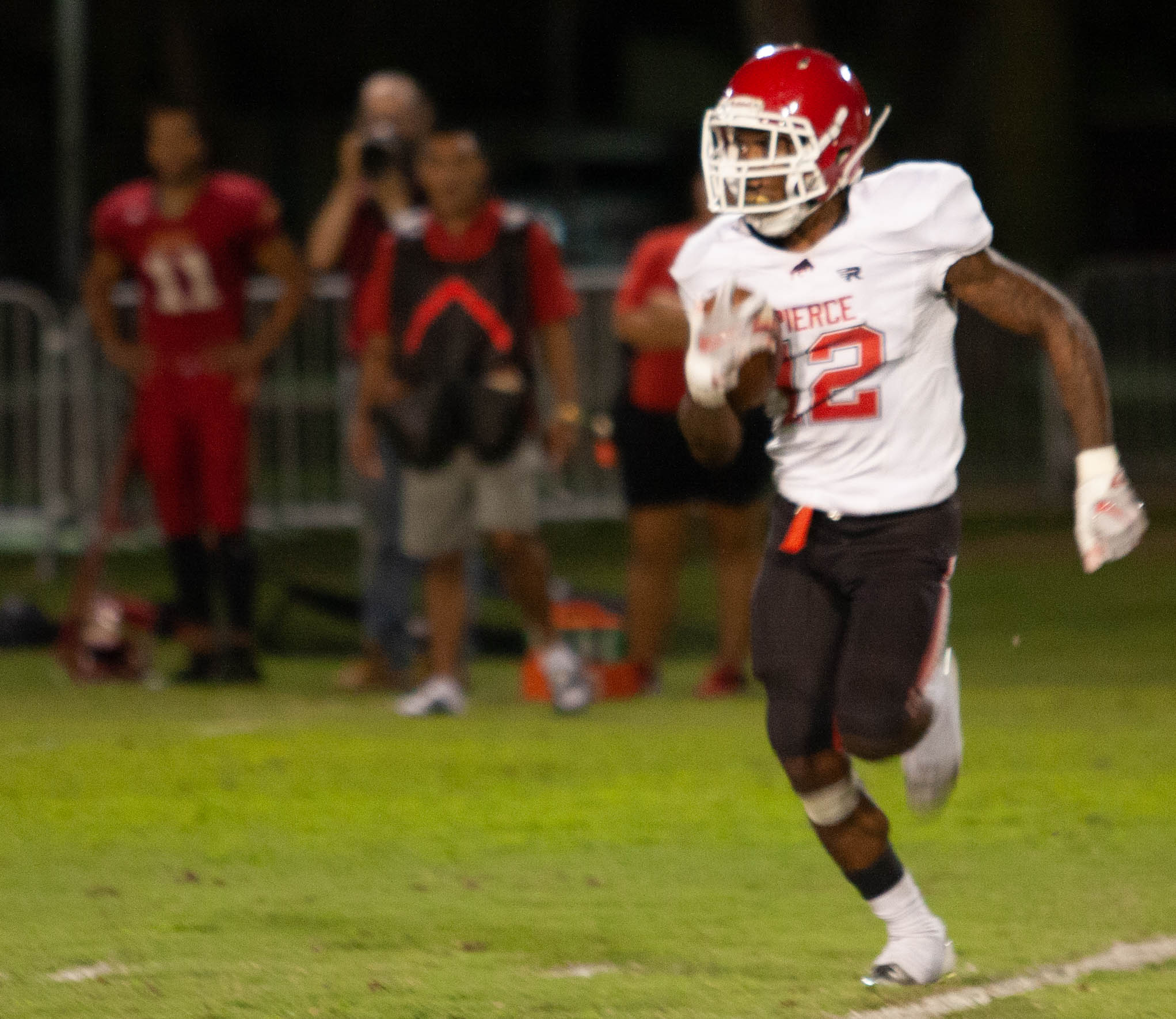 No ACME products or painted tunnels were needed to catch the Roadrunners Saturday night when football traveled to face College of the Desert.

The Brahmas outlasted the Roadrunners in a back-and-forth 44-43 battle that came down to the final seconds.

Despite the harsh conditions of the desert, 93º at the 7 p.m. kick off, the Brahmas looked comfortable throughout the game.

“I told the guys to start hydrating on Monday, and, as you can see, towards the end of the game I think we only had two guys cramp up,” head coach Carlos Woods said. “[I’m] very grateful for our training staff they’re on top of keeping the guys healthy. This is all hands on deck and that’s what it takes in order to have a winning organization.”

The ground game set the tone for the Brahmas offense. Running back David Kates found the endzone three times for the Brahmas, adding 89 yards on 12 carries.

“I came out feeling loose and my line was getting stronger and better as we went through,” Kates said.

Doma Morris carried the ball 13 times, racking up 109 yards, and the deciding touchdown with less than two minutes to play.

Brahmas quarterback Jonathan Saavedra went 20-34 for 247 yards with one touchdown and no interceptions. Saavedra took all but one of the offensive snaps for the Brahmas against Desert, a change of pace from the first four games.

Another change from Woods was getting defensive back and explosive return man Dehron Holloway some looks on offense. Holloway caught a touchdown, but the play was called back for an ineligible man downfield.

“He’s a big play player. You watch his highlight film from high school, he’s all over the field. Playing secondary, playing running back, playing receiver, a return specialist,” Woods said. “We’ve got to figure out how to get that ball even more. I’m really proud of his development. We challenged him to get in the playbook and he has.”

The Brahmas hit the ground running to start the game, driving 65 yards in under three minutes, and Kates scored his first touchdown.

Less than a minute later the Brahmas were back on the scoreboard when Dimetri King intercepted Roadrunners quarterback Noah Shoeman and returned it 21 yards for the pick-six. The interceptions was King’s conference leading fourth on the season, but the first time he has found the end zone.

“You are you going to go feel a lot more [excited],” King said. “I’m just trying to get an interception and make a play for my team each and every play.”

The Brahmas added a field goal, and Saavedra connected with receiver Christian Graves for a touchdown near the end of the half to send them into the locker room up 24-21, marking the highest scoring first half for the Brahmas this season.

“We have to really work on having a fast start,” Woods said. “We also worked on our conditioning. We did like the hill behind our practice field before we started practice so they’re already zonked.”

The Roadrunners took the lead in the third quarter, and the fourth opened with the Brahmas down 30-24, with possession on the Desert one-yard line. Two plays later Kates scored for the second time on the night.

Desert struck right back, driving 63 yards on seven plays before scoring to reclaim the lead at 37-31.

The teams traded punts before Kates capped off an 83-yard  drive with his third score, this one from 29 yards out with 4:17 left to play.

The Roadrunners wasted no time. Running back Tony Williams took it 69-yards on the first play to give the lead back to Desert.

Down five with under four minutes to go, the Brahmas started at their own 29-yard line. Aided by three Desert penalties for 30 yards, Pierce made its way to the four-yard line with less than two minutes to play. Morris made sure those yards counted, scoring from four yards, giving the Brahmas a 44-43 lead.

The Brahmas defense locked down the Roadrunners final drive, forcing a turnover on downs after allowing only three yards.

A couple kneel downs sealed the victory for the Brahmas, sending them into the bye week with a 2-3 record.

The Brahmas return to the field Oct. 13 when they host the Santa Barbara City College Vaqueros (1-4) at 6 p.m. to open conference play.