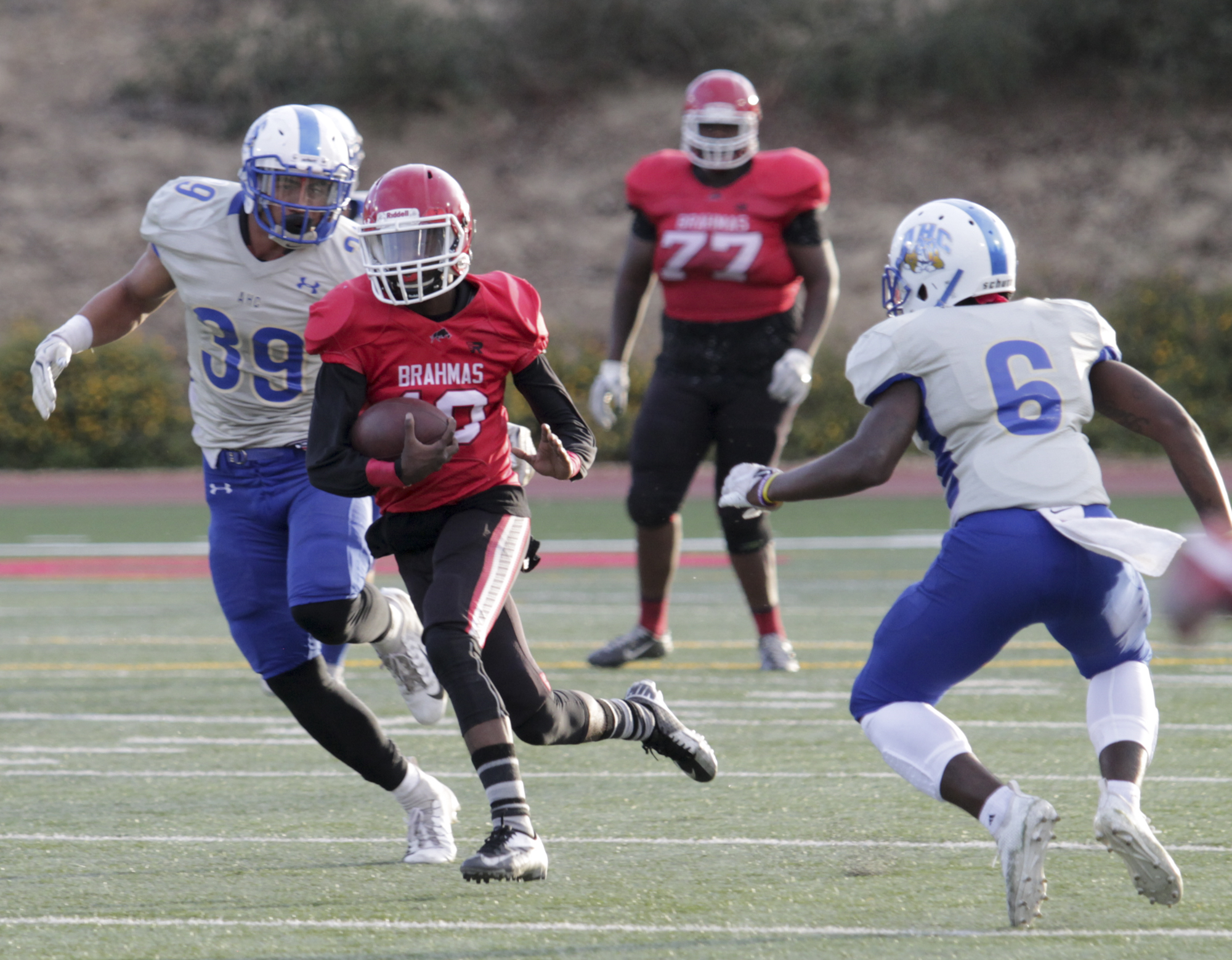 The football team were unable to capitalize on their four-game winning streak losing to the Allan Hancock College Bulldogs 49-24.

The Brahmas came into the game getting the win at LA Harbor College by a score of 10-3.

Cherrod Joe said the team practiced all week to come out victorious against the Bulldogs.

“We’ve been working hard in practice all week,” Joe said. “We knew if we won this game we would be eligible.”

Before the game began, there was a moment of silence as Carnelious Dennison, who played for the team passed away.

The Bulldogs began with possession to start the half and Rashad Beecham gave the Bulldogs the lead.

Jayden Vargas would go on to extend the Bulldogs’ lead before Premire Wilson scored a touchdown for the Brahmas making the score 14-6. They went for the extra point, but a bad snap prevented it from being a one score game.

With 29 seconds left in the half, Joe Guzman scored a touchdown giving Hancock a 21-6 lead

To start the second half, Jonathan Saavedra was the second to score with a quarterback sneak into the end-zone.

After regaining possession, the Brahmas made it a five point game with a field goal.

Head coach Carlos Woods said he told his players to give it their all in this game.

“We were right there in the thick of things,” Woods said. “I told the guys, ‘Let’s come out. Let’s establish the run. Let’s take whatever they give us and we’ll be in good shape.”

After the field goal, things started going downhill for the Brahmas. Hancock scored twice on different occasions with run plays through the middle of the defensive line.

To hurt the chances of a comeback more, The Brahmas had a pass intercepted  that was returned to the end zone for a touchdown.

“I thought he was wide open,” said Quarterback Jonathan Saavedra. “I didn’t see the safety come over the top. He just made a good play on me.”

After the three consecutive touchdowns for Allan Hancock College, the score was  49-16. Coach

Woods said after the multiple touchdowns the tempo changed.

“It’s one of those things that is a little bit of a momentum swing,” Woods said. “It was more about us than it was about them. Meaning everyone has a responsibility defensively by each player who is responsible for one gap and they gapped us.”

With only seconds left of the game, Wilson scored his second touchdown of the game. The Brahmas completed a two-point conversion attempt to make the score 49-24.

The  Brahmas had many turn-overs that affected the outcome of the game. To add to the four fumbles, the team also threw two interceptions to the Bulldogs.

Saavedra said he was trying to change the odds.

Woods said they can’t win with this many turnovers.

“You can’t make mistakes against a good football team,” said Woods. “They’ll come back to haunt you. They win with playing great defense and they thrive off the other team making mistakes. And that’s what we did.”

The referees had called several penalties on the Brahmas making it harder to get a touchdown.

In total 15 plus penalties were called on the teams; some penalties in very crucial moments of the game.

“I said to my players, ‘Look, you don’t even expect to get a call,” Woods said. “You just got to keep playing. Whatever the call is, don’t even worry about it. Just keep fighting.”

Saavedra said you are not going to win games if you make mistakes.

The Brahmas are on the road to face the Santa Monica College Corsairs on Nov. 10.

If they were to win this game, for the first time since 2015, the Brahmas will have a winning record.  Kickoff is scheduled for 1 p.m.