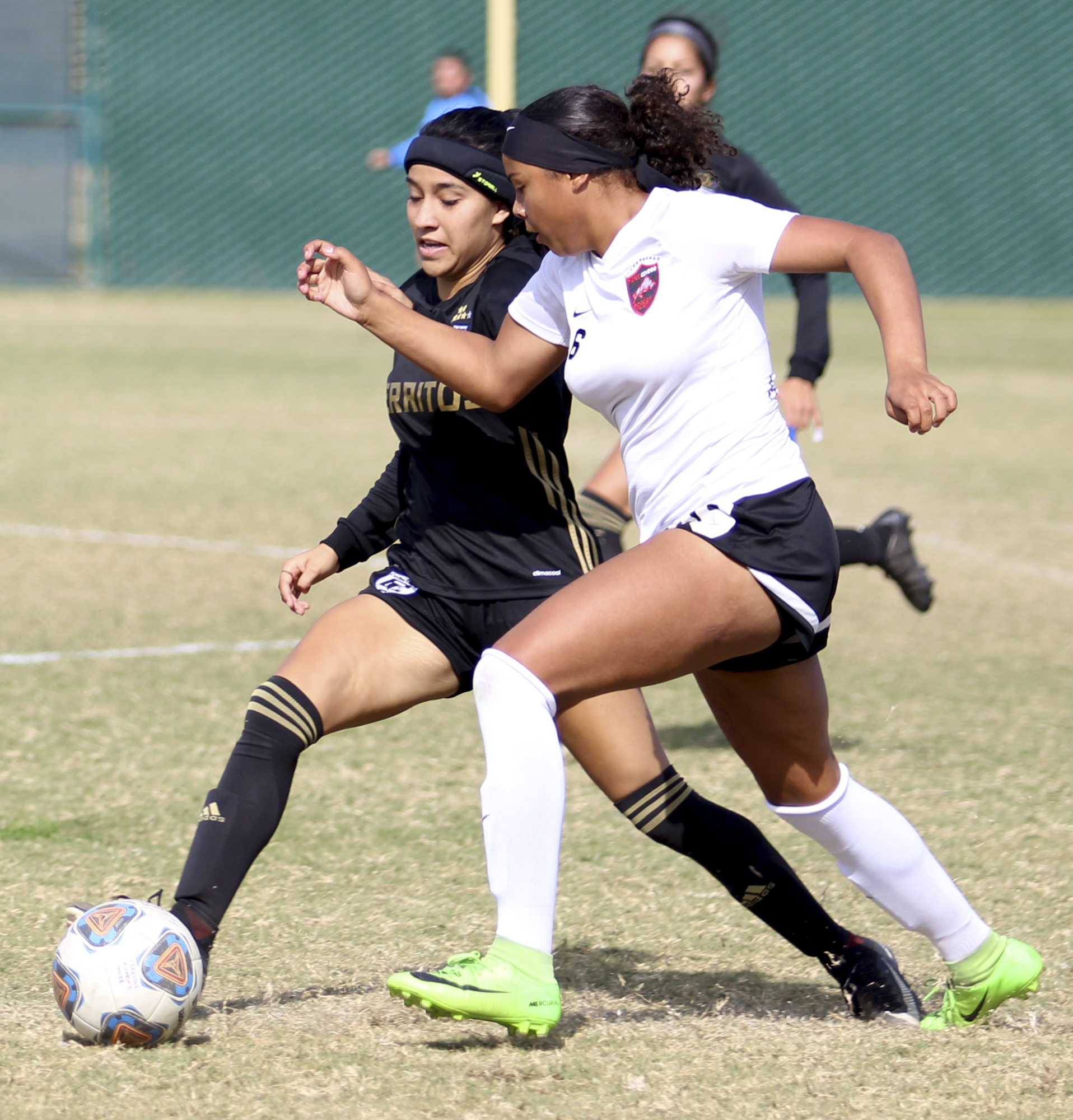 The Southern California Regional Playoff journey was short-lived for the Brahmas, losing the first round 4-0 to the Cerritos Falcons on Nov. 17, at Cerritos College.

Head Coach Adolfo Perez said he was proud of the way his team competed.

“We played the number one team in the country, we had one less player and the game was even throughout,” Perez said. “I honestly could not be any prouder. We lost 4-0, but I don’t look at it like a loss. Considering the circumstances, we performed phenomenally.”

Perez said their biggest obstacle was competing against a team that was undefeated.

“We’re a junior college, but they had six division one athletes,” Perez said. “It was very hard to compete with them, it was top level competition and our girls were certainly not used to it.”

The Brahmas kept the game scoreless until the 42nd minute when Serena Camacho gave the Falcons the lead.

In the second half, things started going downhill for the team.

After Sydney Carr doubled the lead for Cerritos, Emily Claros was replaced in goal by midfielder Adriana Sosa.  The other goalies on the team were out with an injury.

The Brahmas went down a player in the 58th minute when Keyonna Hill was given a red card.

Elizabeth Mendez scored Cerritos’ third goal and Carr wrapped things up in the 88th minute to ensure the win for the Falcons.

Team captain and forward Gisell Cruz said the team left everything they had on the field.

“I know that today we were facing a tough opponent, but we put it aside and just played with a lot of heart and that’s all that a captain can ask for from a team,” Cruz said. “No matter who the team is, if we really want this, we’ll play hard for it.”

Forward Jordyn Conlon said their objective was to put up a good fight.

“We went into this knowing that their scores were 12-0, 10-0, 8-0,” Conlon said. “And the fact that they didn’t even score until the end of the first half means that we gave them a challenge. We were definitely frustrating them. I don’t feel defeated at all.”

Cruz said that after Cerritos scored the first goal, their focus took a hit.

“Our mentality got the best of us, but other than that, I think we overcame all the negatives and kept pushing through,” Cruz said.

Conlon said attitude was a key factor in their performance.

“We were letting the sidelines, coaches, the other players – little things like that just get in our heads,” Conlon said. “We weren’t necessarily playing as well together as we should have.”

Although they didn’t play their best, Conlon said the score could have gone a different direction if they were playing with clear minds.

“I know that when we play with our heads on a swivel, we are pretty unstoppable,” Conlon said. “I don’t think it was talent that defeated us. I think it was just our mentality and where we were mentally that stopped us today.”

The team encountered many injuries this semester, but Perez said the team doesn’t shy away when things get difficult.

“Our biggest strength is our ability to fight,” Perez said. “That’s our strength. We do not give up. We had a lot of things hit us this year, but we got here, and I’m proud of them.”

Despite losing, he said the feeling of getting to playoffs is amazing.

“I’ve been here 18 years and we’ve made playoffs every year, which is unheard of. And to get this far – with this group of girls – feels good,” Perez said.

Conlon said that she hoped to win, but at the end of the day, she was happy to have played on the level that they achieved.

“This is my first season playing, and I’ve enjoyed every minute of it,” Conlon said. “I was going into this planning to win this game and keep going, but it’s just a great feeling to be on a team that is able to get this far. I am so incredibly proud of us.”

Reflecting on the season, Cruz said the team grew physically, mentally and emotionally strong together.

“We bonded, without a bond we don’t really have a team,” Cruz said. “We built our own family. We have that family vibe, and that’s what kept us going all season.”