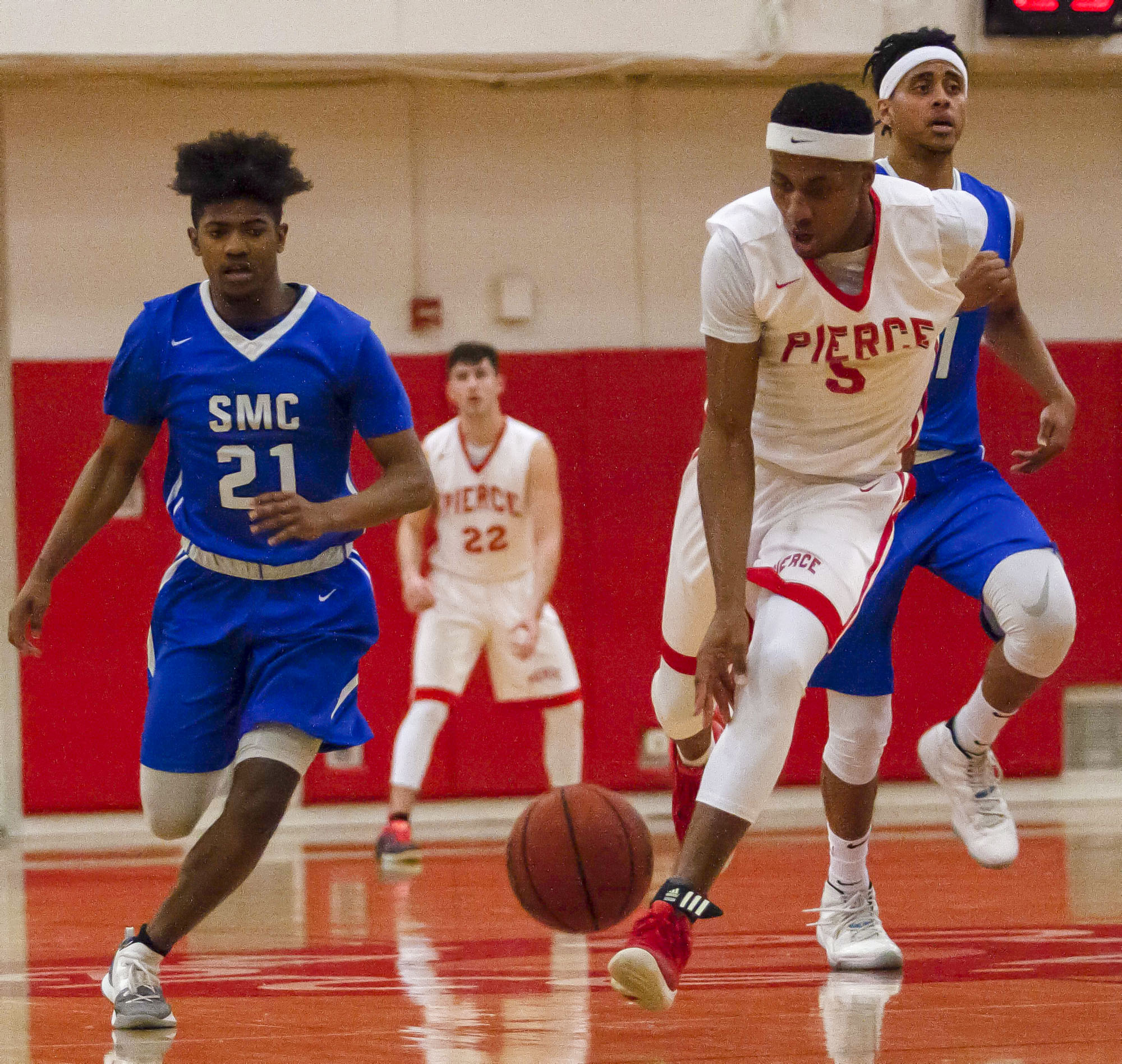 Men’s basketball wrapped up its season and now their attention is focused on improving for next season to try and find better results.

Pierce lost to College of the Canyons in the last game to finish with an overall record of 13-15 and 1-7 in conference play.

“For the most part, we came together as one because Casey [Weitzel] kind of preached more family, more structured versus what I did. I had structure, but it was free-play infrastructure,” White said.

It was Weitzel’s first year as head coach and his first year at a community college, so while it took some time for him to adjust, he had a lot of people who helped him along the way.

“It definitely has its challenges. Coming from a private school sector at Azusa Pacific to Pierce College is very different,” Weitzel said. “I’m thankful to have great people around me including Charles and my other assistant coaches, the athletic directors, the assistant athletic directors that have really helped the process and there’s been a lot of other new coaches.”

Although the season had its ups-and-downs, Weitzel emphasized their early success.

“We struggled with conference play, but overall I think we built a good foundation, something that we can look forward to – the start of something great,” Weitzel said.

Despite the rough ending, there were a lot of high points. Three players, in particular, Anthony McIntyre, Max Edwards, and Christian Guillory stood out the most.

Guillory said the team really came together at the San Diego Tournament.

“We all played really well. We got second in the tournament and then on top of that, I really felt like we came together as a team over that weekend,” Guillory said.

White said that Guillory was the only returning player from last year.

“Everybody else was freshman,” White said. “The other two sophomores didn’t play. Christian put in a lot of minutes last year and this year.”

Weitzel said Guillory had a team-first attitude all season and he was always there when they called on him.

“He was the ultimate sophomore and glue guy for us that did everything we asked him to do,” Weitzel said. “Played out of position at times and stepped up, hit big shots for us at times, rebounded for us and just did whatever the team needed, which was great.”

Weitzel said that he was impressed with the team’s overall resiliency.

“Our team was very good at handling small things that would happen, whether it’s the gym not being available for shoot around or we had a fire in the fall,” Weitzel said. “We had to change our first home game to an away game. So, we just were able to adapt and overcome those types of things that have happened to us over and over again.”

According to White, next year the team could benefit from the discipline that Weitzel can provide, to help them come out stronger.

Next season, the team will be getting reinforcements to strengthen their current group.

“We will be going forward next year with at least five or six guys who I know will play coming in and see what these guys this year didn’t have,” White said. “They didn’t have anybody to look to. There were no sophomores, versus the past couple of years where other freshmen had sophomores to look to. So, next year the new freshman is the head guy.”