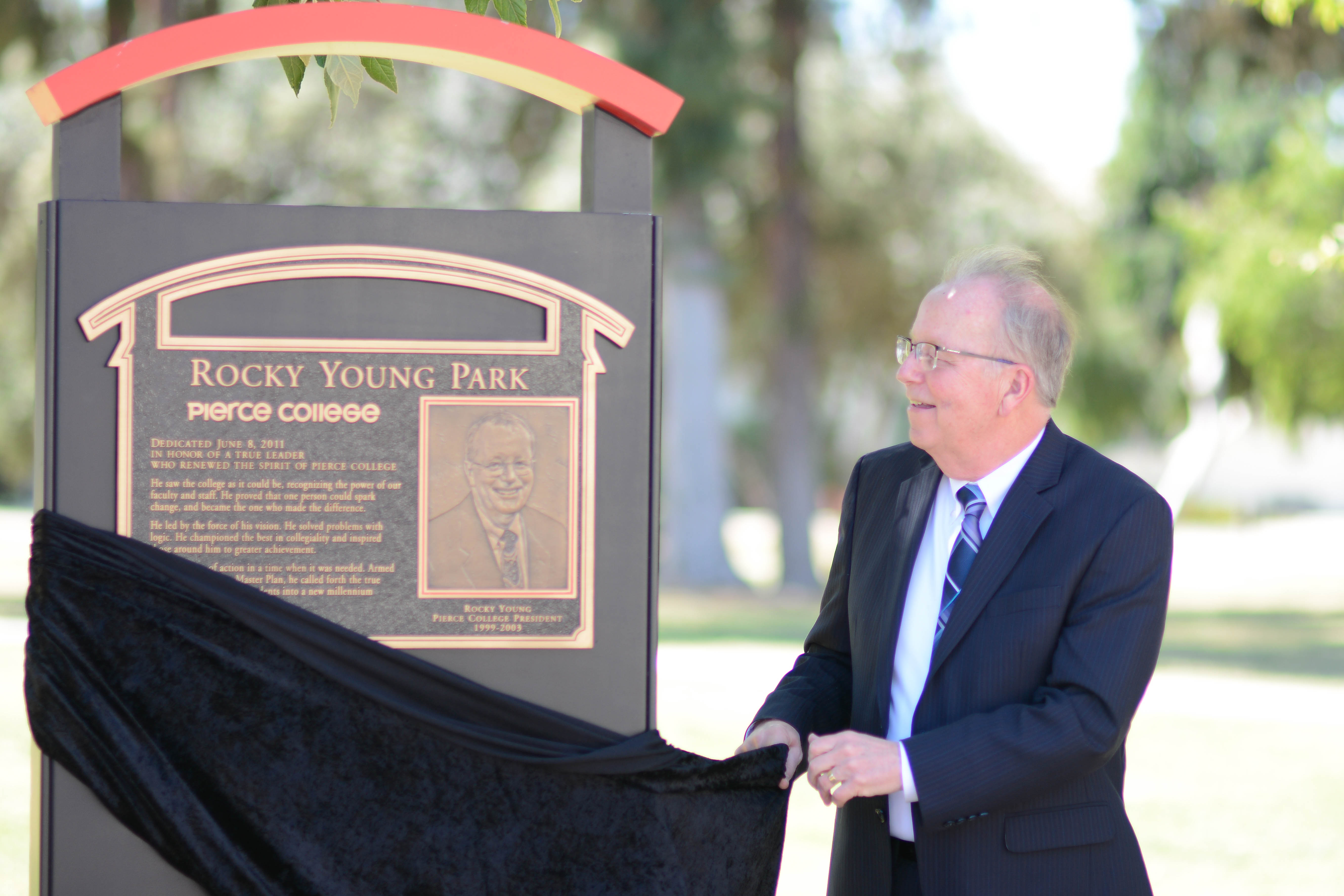 The famed Rocky from Philadelphia is a fictional boxer who was honored with a statue.

The Rocky of Pierce, Darroch “Rocky” Young, is a real life leader, who was honored last week with a plaque recognizing his accomplishments. It sits in the school’s park that has been named after him.

To celebrate the 20 years since former President Rocky Young’s arrival, a day of celebration was organized by the faculty and administration April 17.

Interim President Larry Buckley said he has a great relationship with Young.

“He remembers my name, talks to me, pretends that he likes me,” joked Buckley. “It’s been a wonderful relationship.”

Professor of Business Administration Robert Lyons laughed at Buckley’s joke and said, “I think it’s very fitting and it’s a wonderful tribute to him because he really got this place back on track.”

“I’ve taught here for 50 years and I’ve seen it up and down, up and down. When Rocky came we were down. The place looked terrible,” Lyons said. “The morale was horrible. Having Rocky here brought it back.”

Professor Monika Ramirez and her student, liberal arts major Joanna O’Conner, observed the display their class had created for the event.

“I was approached by Doreen Clay, our PR manager, about the prospect of my students being interested in working on a project as a part of the festivities today,” Ramirez said. “I was teaching Museum Studies, specifically ART 92, so I said yes. My students would love to work on this project because we can fit into the curriculum.”

“We had the opportunity to file through some images found by the PR director of Pierce College,” explained O’Connor. “We were able to look through the records in the library and sift through pertinent information that applied to what Rocky Young stood for and established for Pierce College, which was creating a community available to anyone and everyone.”

Buckley said Young’s leadership impacted those around him.

“His leadership and character touches and will continue to touch the lives of everyone for decades and decades to come,” Buckley said.

Toward the tail end of the event, everyone left the building to take a short stroll to the Rocky Young Park to see the plaque dedicated in Young’s name unveiled.

“It’s really a homecoming for all of us,” said Diana Young, Rocky Young’s wife. “There are so many people here who mean so much to us. And I know this place means a lot to Rocky.”

Young believes one of the highlights of his life was at Pierce.

“I often rejoice about our time together. It was the best five years of my career and I particularly thank you for the naming of this park and this wonderful plaque,” closed Young.