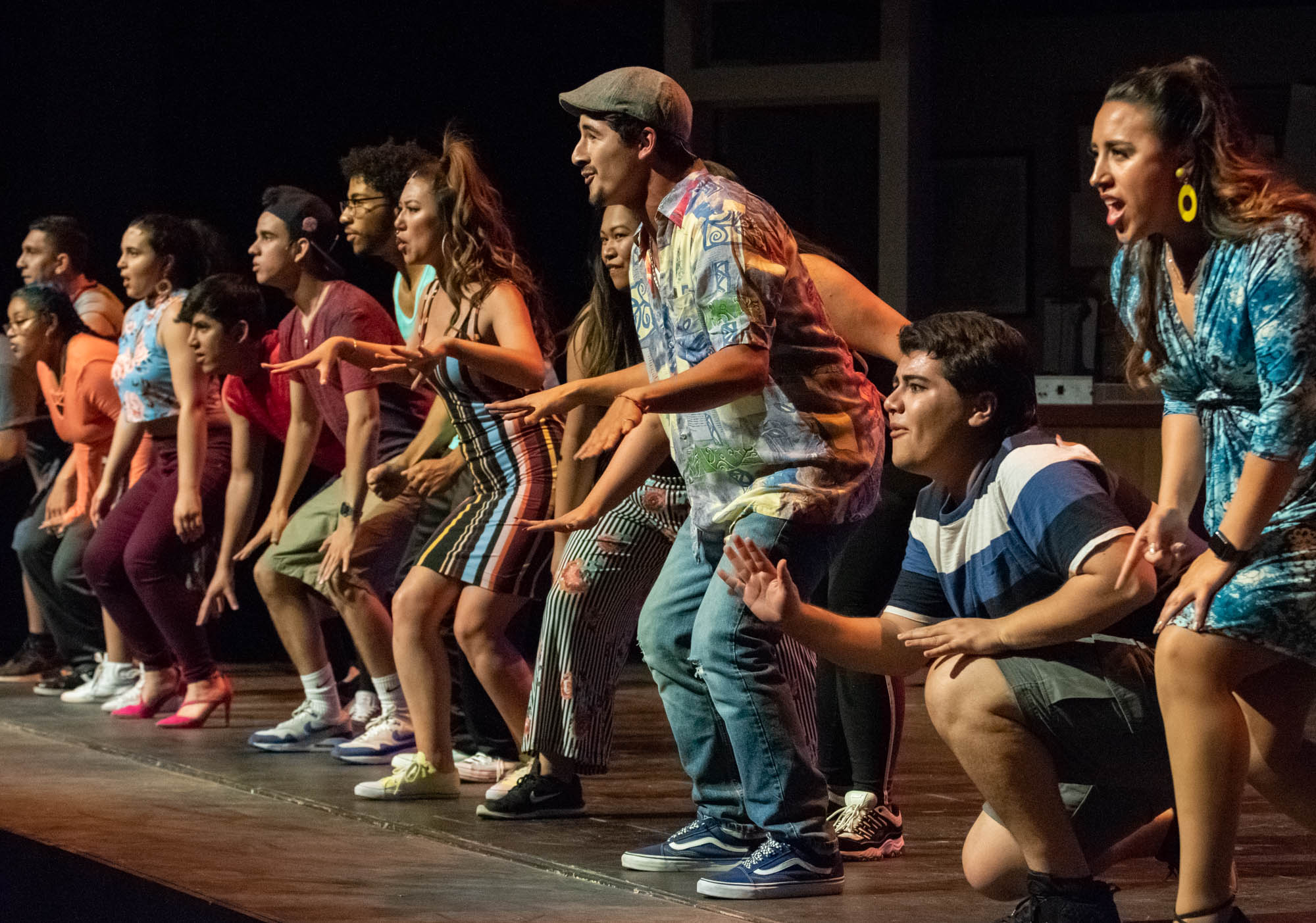 Now considered a revolutionary writer, Lin Manuel Miranda, before his groundbreaking and critically acclaimed “Hamilton,” took the Broadway stage with “In the Heights.”

Though the 2005 musical won four Tonys, including for Best Musical, its story is a typical and  mostly generic tale about relationships in a New York neighborhood over a three-day period. Its saving grace, the creative hip-hop poetry—and at Pierce College, a strong cast—overcome much of the Quiara Alegria Hudes’   cliched book to provide a satisfying performance.

Pierce College Theatre department presents “In the Heights” with a split cast, directed by Shaheen Vaaz. It through runs through May 5 at the Dow Arena Theatre.

The performances were memorable and the rapping portion, synonymous with Miranda’s productions, served as a highlight of the two-hour musical as a whole.

“In the Heights” takes place in a barrio of New York. Usnavi (Alex Balderas), named after his father’s miss reading of “US Navy,” is a bodega owner in his community made up of Dominican, Puerto Rican and Mexican heritage.

He fauns over Vanessa (April Lam), a hair stylist  who works in the hair salon next to his shop. Usnavi deals with life in the Barrio helping out his family figure Abuela Claudia (Christine Avila), and his little cousin Sonny. When Abuela Claudia (Avila) realizes that she is in possession of a $97,000 lotto ticket life changes for everyone living in the barrio.

At the same time Nina (Amy Solano), another resident of the barrio, comes back from Stanford to tell everyone that she had gone on a leave of absence from school from being unable to balance work and grades. Her parents Kevin and Camila (Jeremy Lee and Brenda Garcia), who own a limo company, are shocked by the news, viewing her as the one who would be able to escape the near poverty that the barrio is keeping everyone in.

With her return she sparks a budding romance with Benny (Trevor Alkazian), a long time worker for her father, but the two are forbidden to be together due to Kevin’s prejudice toward Benny for not coming from the same ethnic background.

As Usnavi, Balderas commands the stage when he steps out of the bodega for the first time. Able to convey the tried and true archetype of a clerk stuck in town, Balderas vocals were able to capture an essence on the stage. In greater spirit Balderas was able to create a mesmerizing flow for the raps within the musicals score.

Vanessa is another welcoming voice. From her first introduction, her singing abilities struck the auditorium. She invited the feeling of reciprocity from the plays generic telling of her character.

The cast as a whole is genuinely engrossing. Alkazian, as Benny, and Solano, as Nina, capture the glimmer of young love spectacularly. Both enjoying the flow of the stage as they shared scenes.

The most captivating parts of this play are the raps. In the opening track, named after the play, Miranda’s lyrical abilities were shown with Balderas being able to capture the intensity and subtleties that come with creating a flow that can hit beats and carry from rhyme to rhyme.

While the performances are engrossing, the story is lacking. Much of the music is bland, with the true excitement coming from the raps that were sprinkled throughout.

The subplots of a student dropping out, a girl wanting more, a slacker looking for approval, store owners struggling to stay monetarily viable have been re-told many times. The shift of demographic did little to bring life to the actions on stage.

But this play can be viewed as a piece of Miranda’s steps toward his most recognizable musical, “Hamilton,” which perhaps Pierce will one day get to produce.