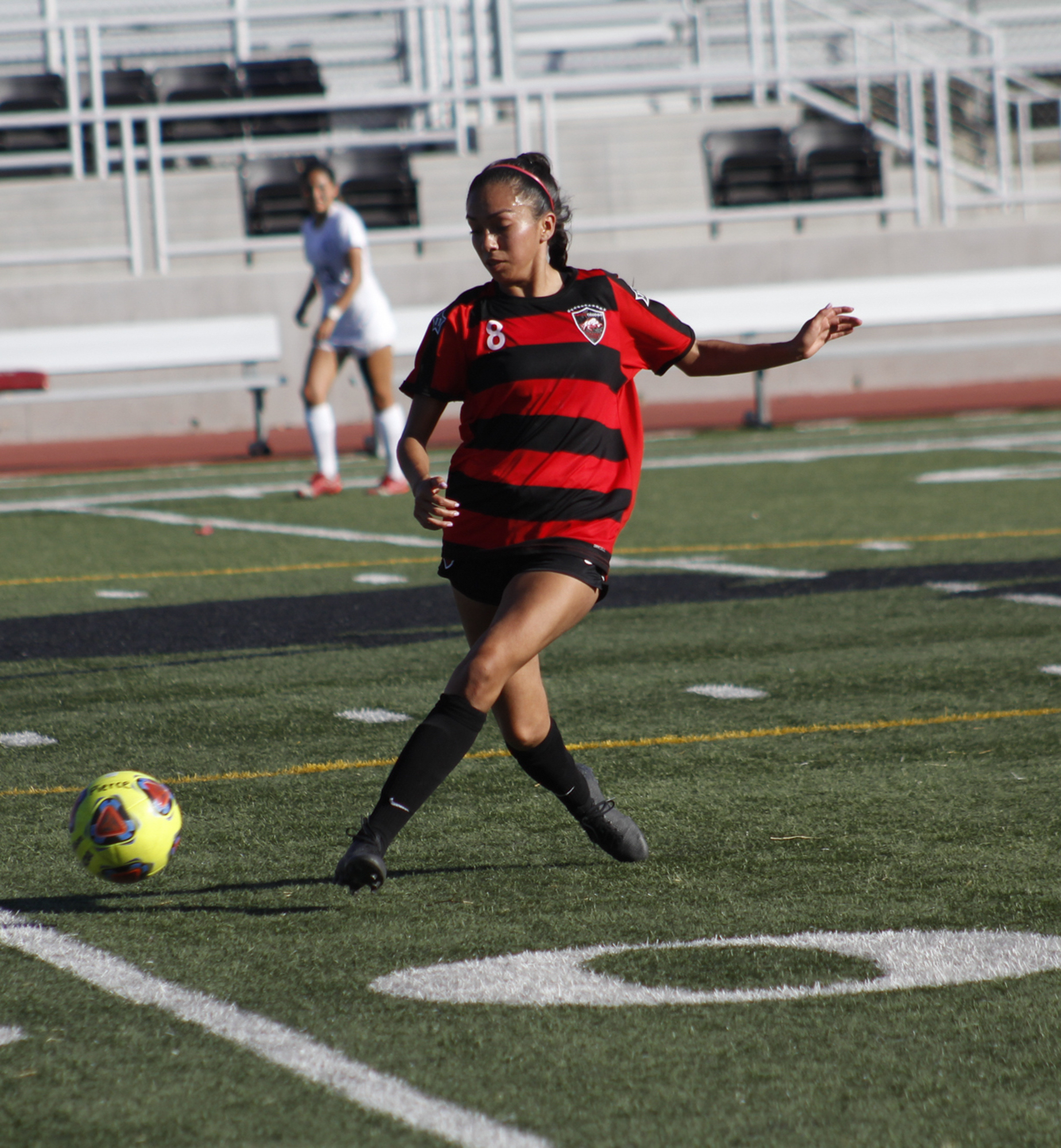 On and off the soccer field, Diana Millan is always aiming for the goal.

Earning last season’s record for the most assists in the state, she strives for a repeat and knows it is going to be a team effort.

Soccer has always been a team endeavor for Millan who first started playing at the  age of four and has never viewed it as a solo endeavor.

“It’s a family thing,” Millan said. “My mom and dad, and my brother [all played soccer].”

Millan also gives special credit to her older brother for encouraging an interest in the sport.

“I would just always go to my brother’s games,” she said. “So I started kicking the ball around at his games so that kind of just started it.”

Millan plays for more than just herself, which is reflected even in the number she wears.

“Number 8, Gisell Cruz, she was on the team last year. She’s my best friend and that’s her favorite number,” Millan said. “It actually used to be my mom’s number, so I got the opportunity to wear my mom’s and my friend’s number.

Head Coach Adolfo Perez said that Millan has a crucial role on the team and is praised her for her leadership.

Teammate Corina Salgato also had praises for the captain.

“She’s very vocal, she controls the middle which is what you need. She’s a great person on and off the field,” Salgato said. “She has earned [title of team captain] for sure.”

Though she earned the record for the most assists in the state last season, she never forgets that soccer is a team sport, stating it’s a team sport.

Being no stranger to comebacks and having won many of their games last season coming from two to three point deficits, Millan knows the steps to take in order to turn their season around and is eager for the challenge.

“Our team has talked about this, our mentality. Every year is a building season for college sports,” Millan said. “Every practice now, we have to make it ‘game like.’ How we practice is going to show during the games.”

Like many great athletes, Millan never stops looking to improve her game and knows she has to do her homework. She credits professional athletes for their inspiration.

“I actually really like Tobin Heath,” Millan said. “I like to consider myself a playmaker. I’m not really one who scores goals, it’s more of me making the plays so Carli Lloyd.”

Without a doubt, Millan strives to be a leader by action.

“Me playing hard makes them want to work hard,” Millan said. “Being an example on the field.”

While her accomplishment may not be a score related accolade, scoring is still at the forefront of her strategy while still maintaining a strong team focus.

“It’s a team sport, so everything you do before the goal leads up to that,” Millan said. “I think assists are really important, they get the goals. My mentality is ‘this is going to be the goal,’ every time I try to look for a forward its ‘they’re going to explode off that pass. My pass is going to lead them to score.’ I just rely on my team a lot, I’m not a one player person.”

Millan also acknowledges her teams’ worth and hopes to gain more support from the student body.

“There’s never enough people at our games,” she said. “We’ve won 11 championships out of 19 years and that says a lot.”

Like her vision on the field to set her team up for a score, Millan looks to do the same for her own future, pursuing a Kinesiology degree.

“I want to finish school and play at the same time, so I’m looking at Cal State LA, it’s a good school,” Millan said.

Millan is working to someday become a physical therapist specializing in rehabilitation. The decision stems from her own experiences and triumph over adversity. Having overcome her own set of injuries in her knee she hopes to someday do the same with other athletes.

Do not let her fool you though, Diana maintains as down to earth as it gets which is illustrated in her post game meal.

“Honestly I love Chick-fil-a, I either get the chicken nuggets or the spicy chicken sandwich, no pickles.”