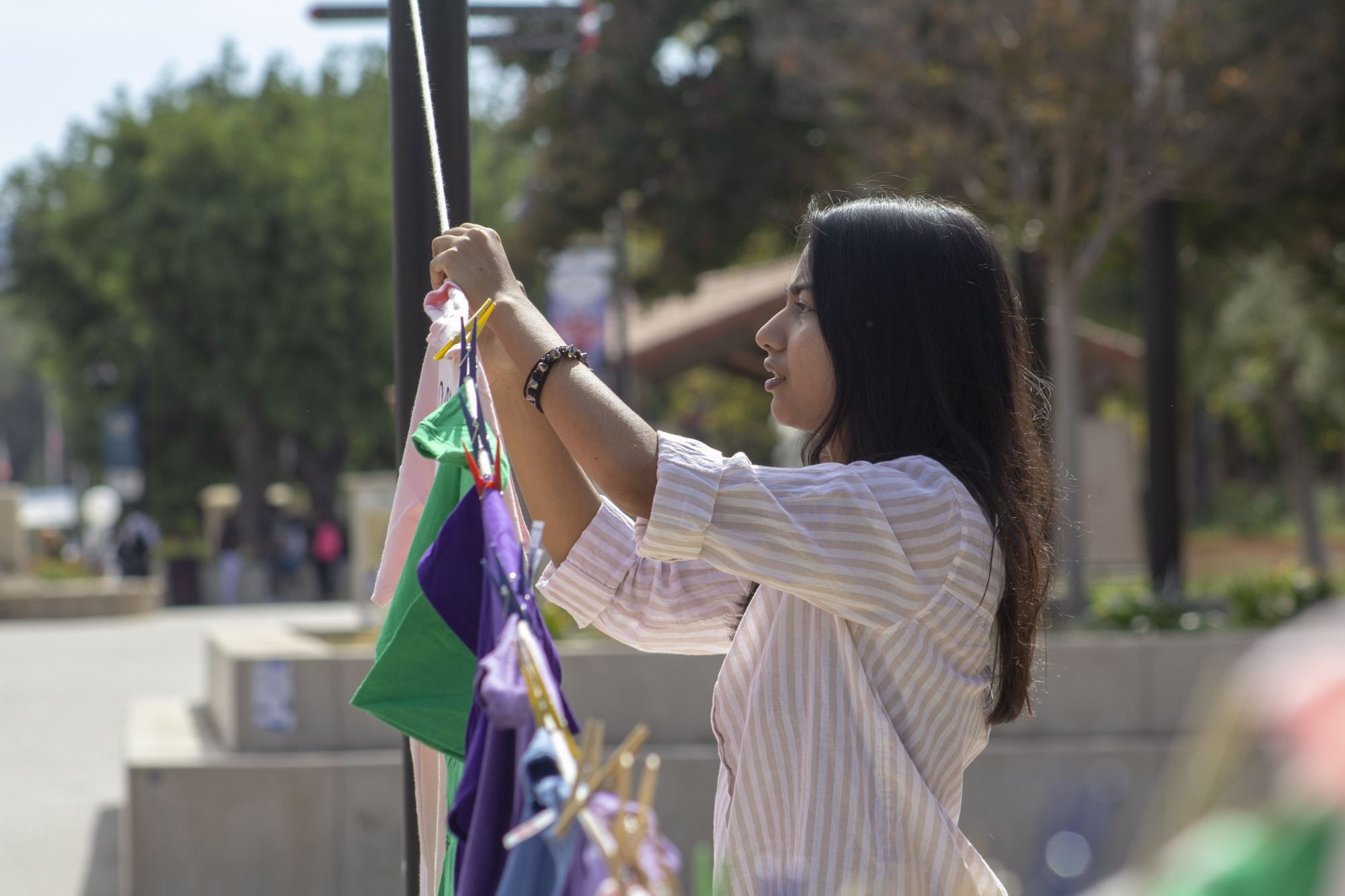 The whispers of harsh and unexpected realities of some students and faculty blew in the wind at Pierce College on sheets of fabric with a story to tell.

The Associated Students Organization (ASO) and Brahmas Responding with Actions and Voices through Empowerment (B.R.A.V.E.) hosted the Clothesline Project at Rocky Young Park Thursday to help bring awareness toward violence to men, women and children.

ASO senator Jenni Severin said she didn’t stop to realize that anybody could be a victim of sexual violence.

“Just to see that everyday when you walk on the Mall you look at different faces, but you don’t really think about their background,” Severin said. “Reading those stories is shocking. As a four-year-old or six-year-old kid, you [may have] been molested or you saw your parents get beat up by each other.”

Strength United Outreach Specialist Andrea Ramos said the Clothesline Project was created to shed light on domestic violence. She said t-shirts are chosen to display that domestic and sexual violence can happen no matter what the victim is wearing.

“It could just be a simple t-shirt and it still hurt you,” Ramos said.

Whoever wanted to write their statement could choose a t-shirt from the various stacks that were provided. Each stack had a label that explained what the colors meant.

Some t-shirts that hung from the line were simple and to the point.

“I loved him, but I wasn’t ready. It’s ok to say ‘no’,” was written on a beige t-shirt. Beige or yellow are the colors representing a battered or assaulted victim.

Other t-shirts had longer messages written on them.

A red t-shirt that hung from the line described the story of a survivor and represented survivors of rape or sexual assault. The end of what was written on the t-shirt motivated others to speak out.

A message on a specific shirt said, “I AM A BEAUTIFUL SURVIVOR! And I forgave him. Here’s to the kids who’ve been a victim of abuse. Speak up! Break the chains! Your life is worth it!”

Ramos said she noticed most of the t-shirts were about teen dating violence or child sexual assault.

“It’s just heartbreaking to see that people could do this to such young people or start from an early age,” Ramos said.

Cinema student Yajaria Garcia had attended the event last year. She said the event helps build a safer community because it allows others to see what survivors went through.

“I know it hits home for a couple of people and some people that have never been through it. It is an eye-opener to what happens in someone’s day-to-day life,” Garcia said.

Economics student Mohammad Khalil said he was saddened by reading different stories on the shirts. He said the event put into perspective how many people go through domestic or sexual violence.

“There’s actually like a bunch of shirts, so this happened to a lot of people and yet you don’t know that until you see people open up and talk about it,” Khalil said.

Cinema student George Vasquez said the event is a great outreach for people who have suffered sexual or domestic violence.

“This is a great way to show that Pierce is aware of what people go through in their daily lives,” Vasquez said.