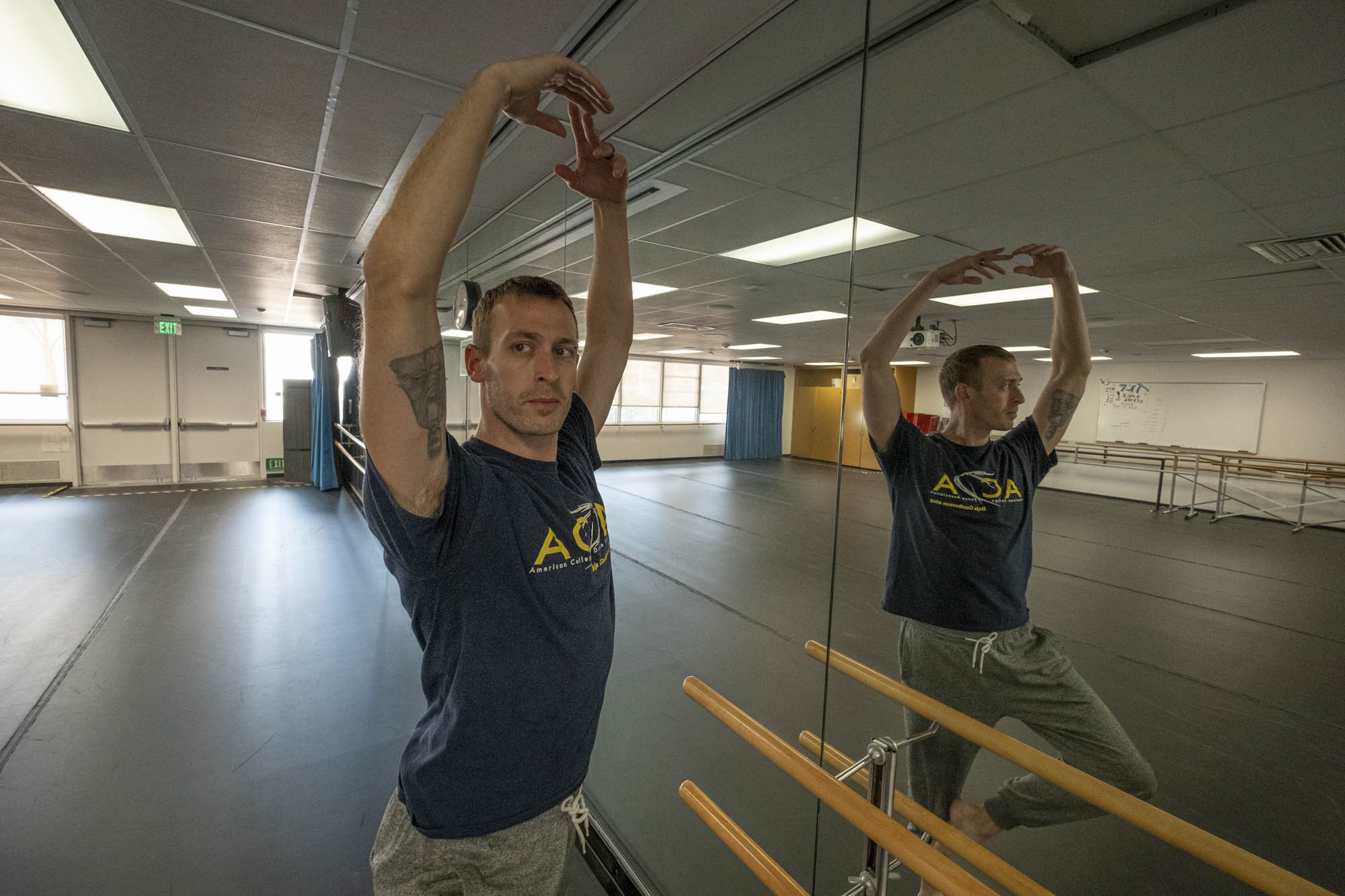 If he’s in a playful mood, which he often is, Brian Moe will say the reason he likes to dance is because he can’t sit still.

But the truth is, he usually uses a quote from Isadora Duncan to explain his career path.

“Isadora Duncan, one of the founding mothers, said that ‘first there must be joy’ and I really kind of delve into this because it’s something that’s so simple, this very idea of why we dance” Moe said. “Well, because it makes me happy, because it brings be joy.”

Originally from Syracuse, New York, Brian Moe started dancing at age 4. He found interest in teaching when he was still in school and loved choreographing dance.

“I like to pass on this knowledge of the body that I have, because dance is experimental,” Moe said. “You can’t just read a book and be amazing you have to actually do it and experience it and invest in it and that’s probably the hardest thing someone will ever do.”

Moe has been a dance instructor at Pierce for four years and has been teaching college level dance for eight years. He has worked hard to make sure the school offers a degree in dance that will hopefully be available within the next year.

“I love college because it’s more of an academia, so it comes from a more heavy place, and I can be a little bit more cerebral with teaching it,” Moe said. “Rather than a kind of monkey see, monkey do where they don’t really understand fully the functionality of it because they don’t understand their bodies.”

Chairman of Theater Michael Gend said Moe is a great colleague to have and he enjoys working with him.

“After meeting for four fall semesters, the committee decided unanimously to recommend him for tenure since he is exactly the kind of instructor we love to have here at Pierce College, forever being for as long as he chooses to work here,” Gend said.

Gend said Moe is excellent at organization and leaving an impact on his students.

“His impact I think will be filled primarily a few years down the road, even more so than it is now,” Gend said. “He’s developed a degree that Pierce College is going to begin offering once the state approves it, an associates degree in dance for the dance students, so it’s the first dance degree that Pierce will be offering.”

Paloma Ferrer, has been a dance student at Pierce for three years said Moe’s classes are her favorite.

“Honestly Brian cares a lot about his students and the pieces and work he does for this school.

He has a lot of pride in,” Ferrer said. “I think that’s something I really admire as a student to see in my teachers.”

“I did not have a lot of confidence coming into dancing at Pierce but he was there from the first semester I came to support me in my dance experience and encourage me to just reach for it, try new things and not be scared,” Ferrer said.

One thing Moe is bothered by is when he meets students that danced when they were little, but their parents eventually stop them from taking classes because they believed they could never have a career in dance.

“The great injustice that we have in our society right now is that they push kids into dance so young that they fall in love with it,” Moe said. “Then when they ask ‘what do you want to do with your life’ and the kids say ‘I want to dance’ they project their fears onto the kids and say ‘oh no you don’t want to do that’ and they pull them out, that is the most heartbreaking thing.”

Moe believes anyone can dance and it is a way to unify people.

“I dance because I find a joy in movement, I enjoy the community of dance,” Moe said. “People go out to dance, it’s a social behavior, insects dance, all animals dance, everything dances, everything vibrates to some sort of rhythm, it’s not a far fetched thing so when people tell me they can’t dance I tell them ‘yes you can’, everybody can dance.”