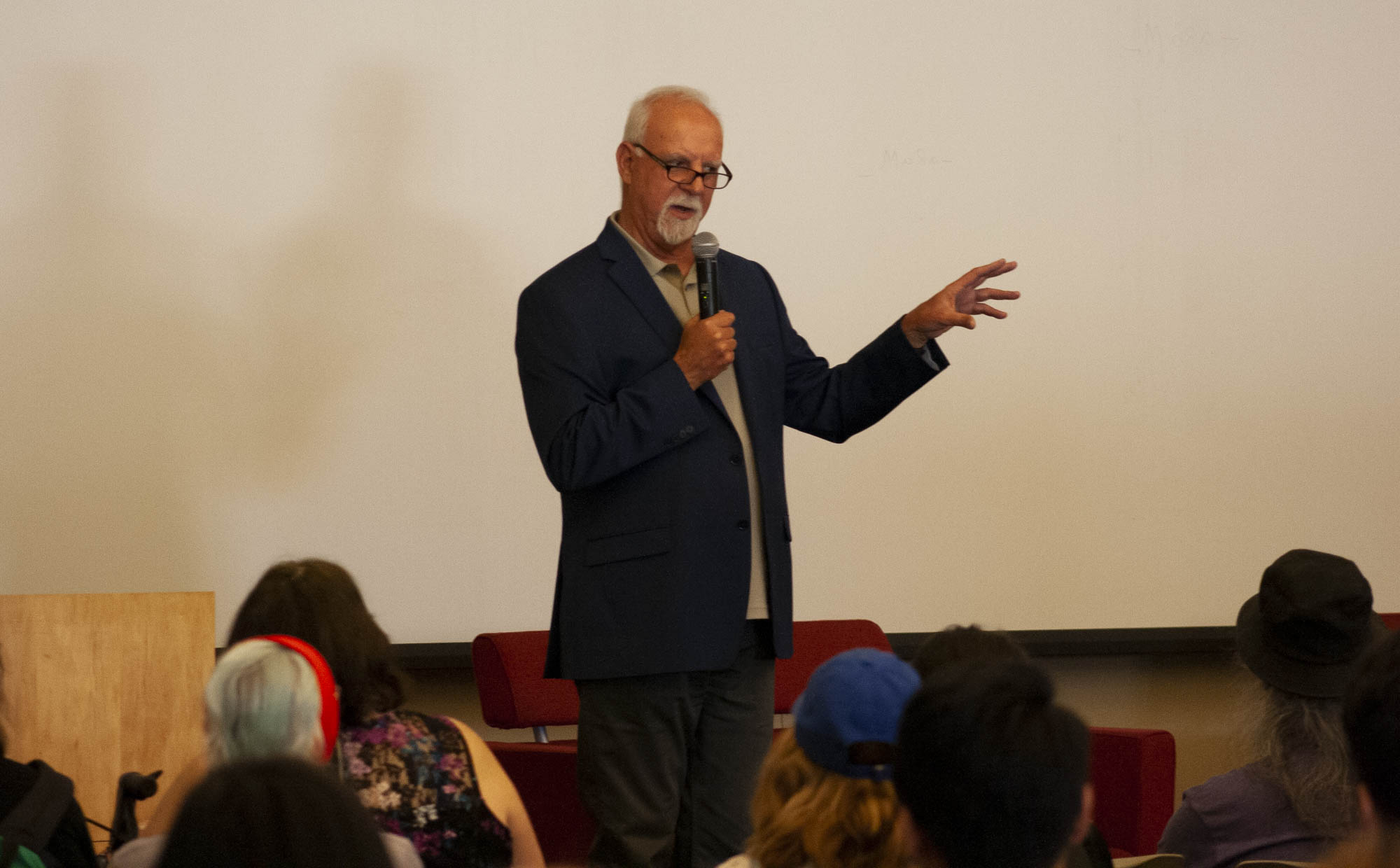 Ayers pulled two sticks out of his shopping cart full of personal items that night. One stick had Beethoven written on it and the other had Brahms.

When Lopez asked what they were for, Ayers said that he taps the sticks to make the rats scatter when they come out of the sewers.

With that, Ayers said good night and hoped Lopez would rest well.

“I haven’t rested well since. I’ve been on a crusade in his name and in your name. In the names of 58,000 people who live on the streets and in their vehicles,” Lopez said. “All of them with a story. They didn’t all go to Juilliard, but they all got a story.”

On March 5, Lopez presented his book “The Soloist” and hosted a panel discussion about homelessness in the Great Hall for the event Unlocking Justice Symposium: Voices from the Streets, at no cost.

“The Soloist” was published in 2008 and was selected for One Book One Campus. It follows the true story of how Lopez tries to write a column on Ayers and the friendship that forms from those efforts.

“It’s nice to have the book still discussed, it’s not so nice to have the problem [of homelessness] as big as it was at the time,” Lopez said. “It’s been disappointing, all these years later to see that those kinds of conditions still exist all over the place.”

Lopez said when he first met Ayers in 2005, there were homeless encampments on Skid Row, Palisades Park and Venice.

Criminal justice student Kari Koster opened the event by sharing her experience with homelessness after suffering from a medical emergency at the end of July 2017.

“Last year I was here on campus, and unless I said something, no one knew that I was homeless,” Koster said. “We don’t know if the person sitting next to you or the person walking by, if they’re homeless or not; if they’re dealing with food insecurities and mental illness.”

Koster said she lived on the streets for a few days before her caseworker placed her in a North Hollywood shelter at LA Family Housing.

While she was on the streets, she was insecure about having enough to eat and keeping herself clean.

“Safety is always a big issue for people, especially a female, a woman,” Koster said.

Koster lives with major depression and post-traumatic stress disorder which she says have led to difficult times, but that she’s surviving and flourishing despite it.

“Two words: homelessness and mental illness,” Koster said. “They are two powerful words and we do have a national crisis with this.”

After Lopez shared anecdotes about Ayers meeting cellist Yo-Yo Ma at the Walt Disney Concert Hall and performing at the White House when former President Barack Obama was in office, he then hosted a panel discussion with local agencies that work with homelessness.

Pierce alumni Quintanilla originally planned to attend the Los Angeles Homeless Initiative Conference that was scheduled at the same time as Unlocking Justice Symposium: Voices from the Streets, but chose to speak at Pierce.

“I think this is more significant because it’s really doing the work, being in front of a crowd in my community,” Quintanilla said. “It’s more significant to be here to lend a voice and contextualize some of the stigmatized mental illness and homeless related issues.”

Librarian Lisa Valdez chose “The Soloist” for One Book One Campus and was excited to have agencies onstage that specifically focus on student issues.

“They have agreed to partner with us to create more wrap around services for our students and have those liaisons for us to work with,” Valdez said.

D’arcy Corwin from the Brahma Pantry attended the event to help those interested in CalFresh, a nutritional food program that helps low-income households purchase food.
Maggi Espada-Hernandez from Dignity Health at the Northridge Hospital Medical Center also had a booth for the Center for Assault Treatment Services.

Lopez continues to write about homeless issues at the Los Angeles Times and lectures at Cal State Los Angeles where he often hears students wondering where they’ll get their next meal.

“There’s a great need and we just need to bring more awareness to it,” Lopez said. “It’s students living in their cars, it’s students couchsurfing, it’s students not knowing where to go and it shouldn’t be. It shouldn’t be this way. We need to talk about it, tell stories of the people who are in this predicament and keep searching for the solutions.”