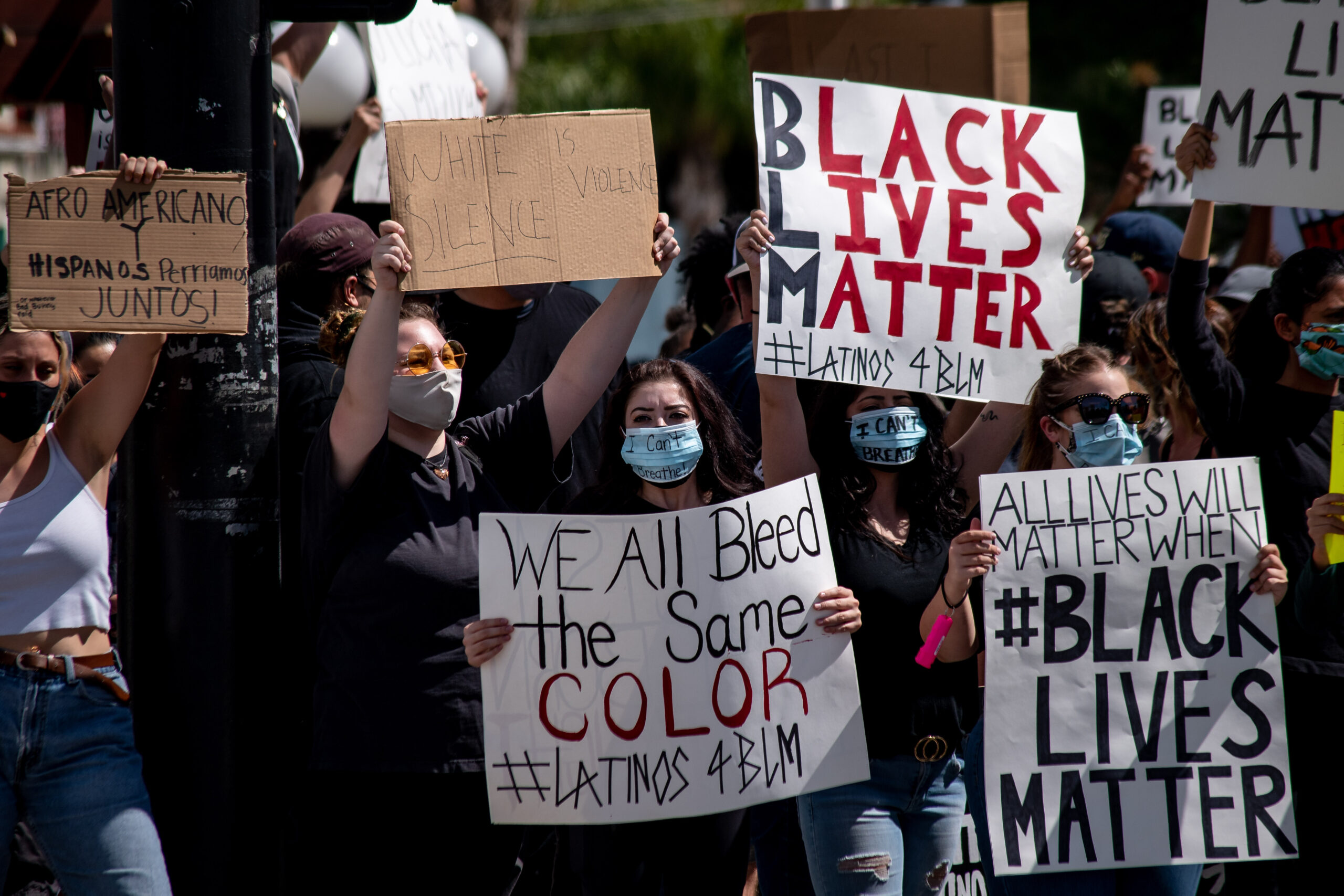 More than 100 people gathered, many holding signs and chanting “Black lives matter,” “Say his name” and other call-and-response sayings in support of Black Lives Matter in Granada Hills on Monday afternoon.

The event took place at all four corners at the intersection at Chatsworth Street and Zelzah Avenue. Police vehicles were parked in the area. There appeared to have been no incidents of violence at the protest.

Most people heard about the protest from a series of social media posts.

Malachi Maisha, who uses they/them pronouns, said they went to the protest to be heard and to speak out against the deaths of George Floyd and Breonna Taylor.

Maisha said they became emotional while chanting with others because they are a slam poet and are used to speaking alone on stage.

“To hear so many people on the same chant as you, the same voice as you–it was just like one voice,” Maisha said in a phone interview. “It was like a one band, one sound. It was a beautiful thing. It was like music.”

Maisha said their main takeaway from the event was the feeling of unity.

“People are here for us,” Maisha said. “A lot of times we feel like black lives don’t matter.”

Maisha said they felt good about seeing people from multiple cultures come together.

“You felt so complete to be able to see everybody fighting for the same thing,” Maisha said. “It was an awesome experience.”

Sheryl Thompson said it was her first time at a protest. She said seeing the video of George Floyd’s death was the reason she attended.

“That was devastating, and I’ll never get that image out of my head,” Thompson said. “So that’s why I’m out here because it has to stop for my kid, her generation and her children that are coming on. It has to stop. When does it stop?”

Thompson said she is almost 60 years old and has been dealing with racism for “a very long time.” Her father and brother are from the deep south, and she said she feels tired of injustice.

“We have to do something,” Thompson said. “We can talk about it. We pray about it. The prayer without action or faith without works is dead.”

Shey Cobb, Thompson’s daughter, said she was there because she feels the country needs change.

“I’m tired of having our Black men killed every single day,” Cobb said.

Cobb said she is calling for an end to police brutality and that she wants the Minneapolis police officers responsible for George Floyd’s death to be held accountable.

“Hopefully it will act as a deterrent for other cops to not act in the same way,” Cobb said.

Melaney Garcia held a sign saying “You stood with us. We stand with you.”

Garcia said her and her family members went to the protest because she is of Jamaican descent and also has Mexican, Cuban and Nicaraguan people in her family.

“A lot of them come from black descent, which is why we all decided to come,” Garcia said. “We have very, very, very dark, African-looking family members, and they get the same treatment that most African Americans do. So this is just one way that we can at least help our family.”

The protest started around 3 p.m. and lasted until around 6 p.m. Los Angeles County placed a curfew starting 6 p.m. Monday to 6 a.m. Tuesday.

Maisha said they were inspired to go to more protests.

“I love the peaceful protests,” Maisha said. “I can’t necessarily knock someone else’s way of protesting, but this is what I enjoy.”