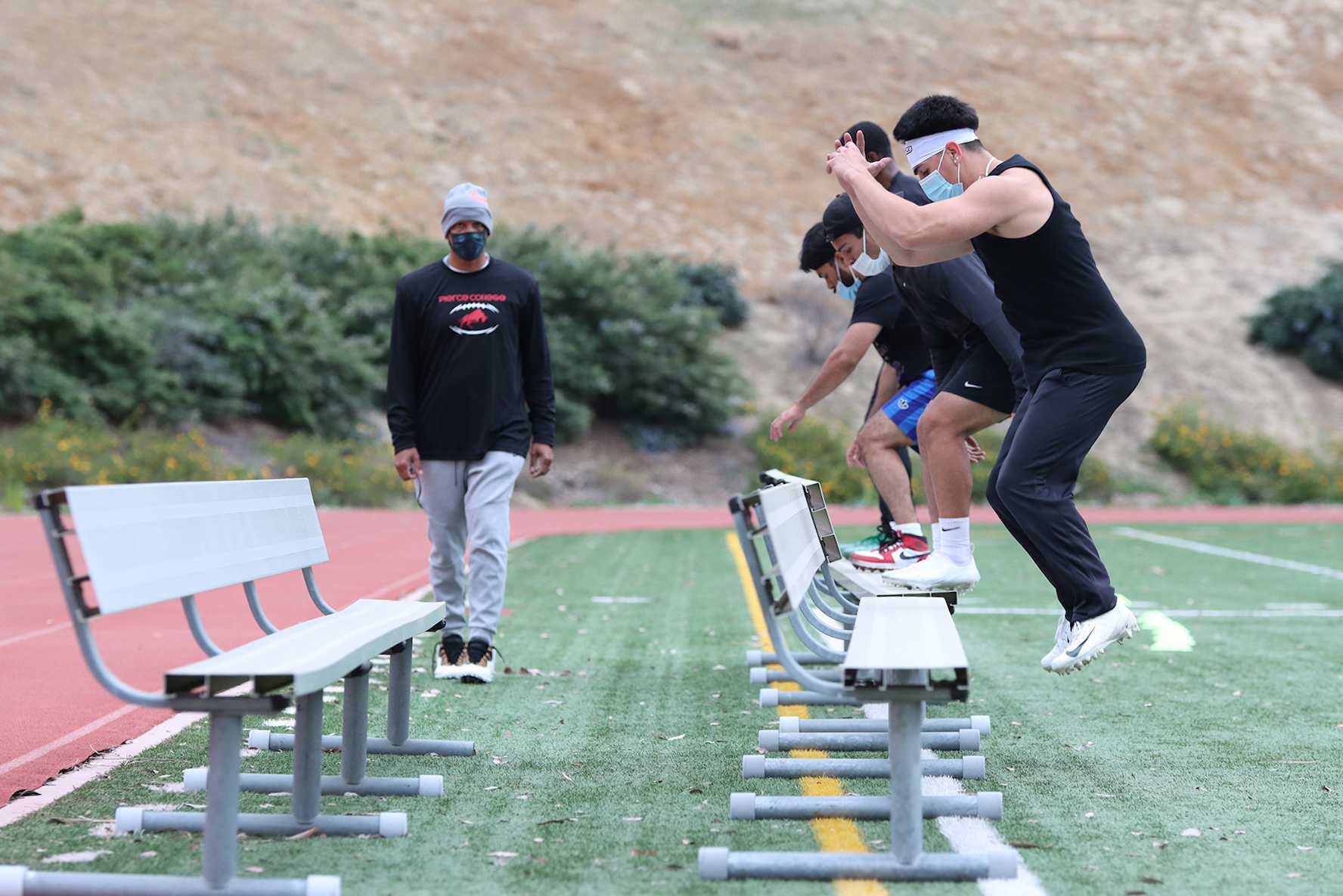 To ensure their safety, Pierce requires student athletes to coordinate their practices outdoors.

The swim team’s conditioning for this week was held at John Shepard Stadium instead of Steven E. Schofield Aquatic Center because the lifeguards are in the process of being recertified.

For now, the athletes have been doing strength training exercises and cardio on the field. According to swim head coach Judi Terhar, they are hoping to be at the pool facilities April 26.

“There is no comparison on land because swimmers need to have water,” Terhar said. “As soon as we get back in the water, these guys will come alive like a plant or a flower blooming.”

Terhar said that despite the obstacles the past year brought, the athletes have been coping well.

“We’re trying to make the best of what we’ve got, and we’re very grateful to be back on campus,” Terhar said. “[The students] have done amazing. They’re very resilient.”

Interim Athletic Director Susan Armenta explained the process of getting students on campus and the procedures student athletes must go through to enter campus. Students have to do a pre-screening questionnaire every time they come to campus as well as have their temperature taken.

Armenta has watched the different sports practice as coaches enforce these new procedures such as social distancing and mask wearing. Armenta said she often reminds athletes to social distance and wear masks properly.

“Being athletes we’re used to giving high fives, you know, cheering each other on. So, I get that it’s going to be a hard habit to break but we’re doing our best,” Armenta said.

The basketball team conditioned on the tennis court on their first day back on the Pierce campus. Basketball players were limited to exercises that did not involve equipment to lessen the risk of spreading COVID-19.

Head basketball coach Charles White shared what he missed the most about coaching his athletes in person.

“I missed the relationships, I have a lot of relationships with these guys. Some of these guys have been around me for a couple of years, some even longer than that. I miss seeing the camaraderie and seeing God’s work,” White said.

Interim head football coach Anthony Harris said it was great to see the student-athletes in person.

“They’re really happy to be out here and with our new coaching staff, we made a really good impression on the kids,” Harris said.

Harris said the players were happy to be back.

“They were ecstatic,” Harris said. Our main focus now is to get them ready and when the time comes we can start using equipment.”

Head soccer coach Adolfo Perez said he was ecstatic to be back.

“This is day one. When I heard the news that we were going to return it was like Christmas for me,” Perez said.

He acknowledged the players for their commitment especially during distance learning.

Perez last year was supposed to coach his 20th season with the team, but COVID-19 had other plans.

“I’m excited. We’re back for the 12th [conference title], that is our motto,” Perez said.

Soccer player Julianna Euyoque, said that being on campus is surreal.

“I honestly didn’t expect for us to be back. It is very different and quiet. We would normally see high schoolers in the stands, but today is different,” Euyoque said.

Pierce student athlete, Maria Sandoghdar, said that she’s grateful to be able to be on campus training again. Sandoghdar competed on the school’s swim team prior to the COVID-19 pandemic.

“We feel lucky because I know a lot of schools wish they could be on campus,” Sandoghdar said. “Even if we can’t be at the pool this week, I’m completely thankful that we get to stay. I’m extremely thankful for Judi [Terhar] and the athletic director.”

Sandoghdar said that she felt relief when the school announced they were going to allow athletic conditioning.

“I genuinely thought that we were only going to be gone for a couple of weeks,” Sandoghdar said. “With teammates, we get to motivate each other, and seeing each other over Zoom isn’t the same thing as motivating each other in person.”

Basketball player Jamie Crespin shared some of the problems she ran into at home while practicing over Zoom.

Pierce basketball player AJ Werner shared his lack of motivation he faced while practicing over Zoom.

“Sometimes you just wake up and it’s like you don’t want to go. Turn on your laptop just to go to practice. Motivation was kind of hard sometimes, not like anybody’s like talking in your ear, keeping you accountable like coaches over here today, you know, they’re telling you what to do, it’s like you’re not getting that same thing over zoom,” Werner said.

Basketball team captain, Larry Williams, shared what he missed about the in person training.

“I missed the competitiveness and being able to talk to everybody and push people to go harder, make everybody try to hit their full potential,” Williams said.

Armenta is meeting with the district to plan the next phase of their athletic training. She hopes to get students practicing with equipment and indoors by conducting weekly COVID testing for students and cleaning and disinfecting equipment and facilities after every use.

She said that the students are excited to be back in action on campus.

“I think even the slightest hope of coming back to campus instilled excitement and energy,” Armenta said. “Not being able to do a lot of things that we’re used to doing takes a mental toll. I feel like all students had that toll, but I think student athletes in particular because we’re used to that interaction with our teams and our coaches.”