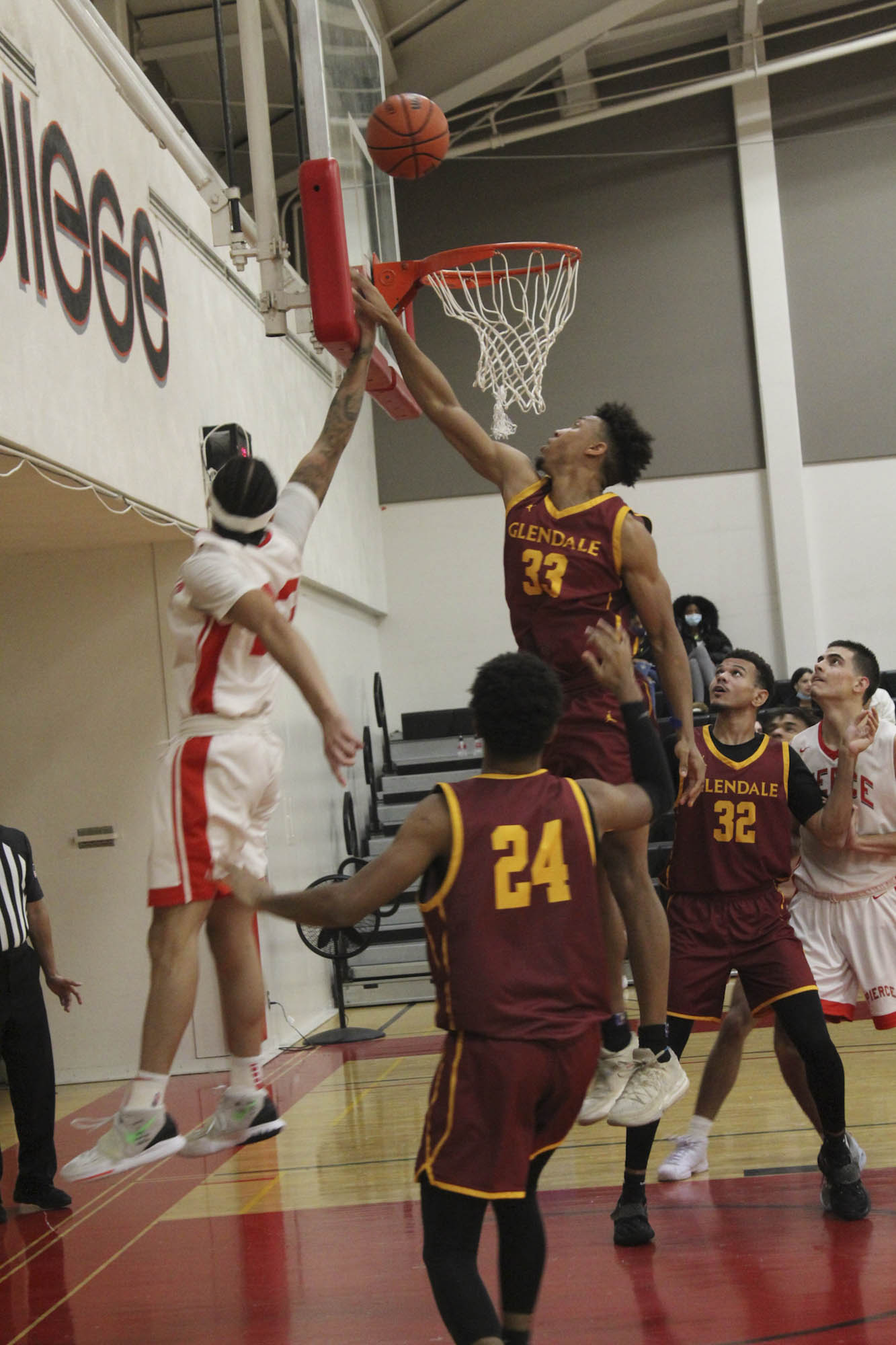 Through a hard fight, the Brahmas took their first victory of the season.

Pierce College came out on top Tuesday to take their first win of the season over Glendale Community College 98-92.

It was a highly contested battle with both sides attempting to score, but Pierce had trouble due to the hard nosed defense being played.

The hard defense, combined with a referee team that “let the players play” ensured that the game would be intense for the full 40 minutes.

The game itself started out rough for Pierce with the first three scores going towards Glendale.

Things continued to look bleak for the Brahmas as they started out the game one out of seven from the field.

This all seemed to turn around at around the 15 minute mark when a block by forward Zion White brought the crowd to its feet.

Zion White said it was important to win.

“It got close towards the end of the game but everyone kept their composure. When we got in the double bonus everyone made their free throws and iced the game to seal the win,” Zion White said.

This was just the tip of the iceberg though, as Pierce continued to swarm the Vaqueros throughout the first half.

It was back and forth for a while until the seven minute mark when point guard Larry Williams found wing Don McCrary for a lob off the screen, giving the Brahmas swing in momentum.

This run did not last long though, as Glendale responded to the 6-0 run by Pierce by draining a trio of threes to quiet the crowd and bring the game back to within two.

This was accomplished by finding point guard Julian DeJesus, who only missed one three all night.

As the half approached and both teams vying for the edge going into the locker room shooting guard Hector Page made two plays that appeared to swing things back in Pierce’s favor.

With over a minute left on the clock Page made an off balance layup as he was fouled hard driving to the lane.

The second was on the final play of the half. Where, with five seconds left, Page put his head down and drove to the hoop.

As the shot bounced out of the rim however, Page grabbed his own rebound and put it back in right as time expired.

As the teams went into the locker rooms for halftime, there was a visible pep in Pierce’s step as they prepared themselves for the second half.

When the second half started, there was a clear edge to both teams, as there were few fouls called in the first half and both sides were looking for the call more.

This was clear within the first minute of action as freshman center Gabe Abbott got into it with a Glendale player over a jump ball. Bringing the physicality of the first half instantly into the second.

The Vaqueros came out of the gates hot, putting a run together that brought them from down four to up by six in the span of two minutes.

This was halted at the 17 minute mark when Larry Williams took control and started a 12-2 Brahmas run with six points straight, including a steal, and an offensive rebound for the put back.

When asked his thoughts on if this was the final momentum swing, head coach Charles White felt as though, despite some questionable plays, William’s energy is what swung the game back in Pierce’s direction.

“He’s that beast we needed, you know, you got to like what he [does] sometimes, but sometimes you just got to let him go,” Charles White said.

The momentum continued to stay with the Brahmas as they held onto the lead over Glendale before Julian DeJesus caught fire, sinking five threes in six possessions, retaking the lead with five minutes remaining.

As play continued the “let them play” mentality came out again with both teams fighting hard for every possession. What happened next was completely unexpected.

As Williams and a Glendale player got into it following some hard nosed play going after a loose ball.

Charles White’s opinion of the refereeing was very divisive considering the player reactions on the court.

This seemed to put a fire under the Brahmas though, as the team found shooting guard Dylan Hicks for back to back threes.

This led to a 15-4 Brahmas run leaving Pierce nine points up with 1:45 left on the clock.

“They looked at our 0-2 record. They thought it was going to be a cakewalk and lot of players on our team stepped up,” Werner said. “We don’t want teams coming to our home and getting wins.”

Werner said they’ll look at film to see what they need to fix when they play Glendale again.

Despite some late turnovers forced by full court defense from Glendale, the Brahmas were able to pull out a win, giving them a 1-2 record overall and a perfect 1-0 at home.

The Brahmas next game will be Thursday Nov. 18 where they will be playing Glendale at Pasadena College as part of the Skip Robinson Classic. Tip-off is at 5 p.m.