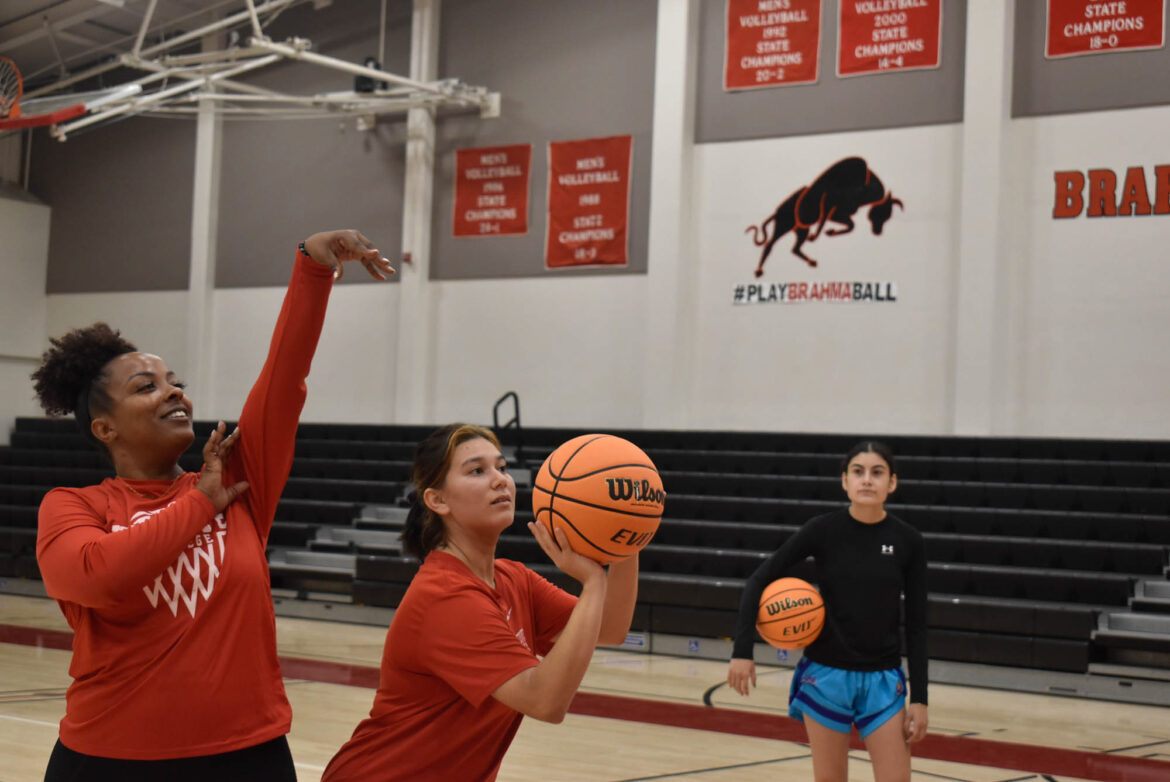 It has been 17 years since Thara Innocent shot a ball for the Pierce College Brahmas’ women’s basketball team.

With a new gym floor, a new team and a new head coach, the future is looking bright for the Pierce College women’s basketball team.

As a former player, Innocent brings many fond memories of playing for the program.

According to Innocent, one of her long-term goals is to eventually win a championship for the school.

“Before I leave here, my goal is to get one of those banners up with the names on there, and for everybody to walk through this gym with a story to talk about,” Innocent said. “I remember when I used to come here. Now look at me. Everybody is going to build their own story.”

For the 2022-23 season, Innocent interviewed and was the first-choice pick to take on the position of head coach, according to Armenta.

Considering the two years of lost momentum that the women’s basketball program suffered, that responsibility might seem rather daunting, but Innocent welcomes the challenge.

Innocent inevitably brings a fresh new perspective to the program, but that long-standing, built-in respect for the history of the Pierce College women’s basketball program remains strong as this new chapter begins.

“There’s always history behind every campus, and one thing is I don’t want to take the history away from the school,” Innocent said. “When Jim Couch was a head coach here, he did an excellent job of keeping the program going. He was always recruiting. He worked hard.”

Since signing on, Innocent has hit the ground running and can often be spotted around campus talking with people and recruiting new players with the hopes of building the women’s basketball team back up to a competitive level in the coming months, a decision Armenta said she is very excited about.

“We’re looking forward to the season. She is very engaged on campus,” Armenta said. “She is doing a great job recruiting new players for the team.”

Innocent is not only concentrated on the game of basketball and building a strong team atmosphere, but she is devoting a great deal of energy toward guiding the team’s players off the court when it comes to their health and education.

Team member Tijera Henry commended Innocent for paying close attention to her and her teammates’s education and wellbeing.

“Playing for Coach is different because I think she actually cares about our bodies and how we hold up throughout this whole process,” Henry said. “I know a lot of us are getting older and our bodies don’t carry on the same, so she’s very caring about us and is looking out for us unlike any coach that I’ve had.”

Back to the education aspect of Innocent’s leadership philosophy, Innocent said she is a true believer in the law of attraction. Her lifetime motto is “hard work plus sweat equals success”.

According to Innocent, that saying can be applied to any goal in life.

According to team member Rana Al-Amin, this coaching style is rare.

“Playing for Coach is different from all my other coaches because she’s very patient and she’s not all about basketball,” Al-Amin said. “She’s also very strong on our academics. She makes us send transcripts and makes sure our grades are good so that we can play ball and so we’re getting a degree out of what we’re doing.”

Innocent believes that building a strong foundation both on and off the court will secure the future of the program for many years to come. A future that Innocent is excited to be a part of.

Innocent said she feels like she is supposed to be here. Almost as if the path led her back to Pierce College for a reason.

“I got other offers, but this I feel is where I need to be right now,” Innocent said.

With this team, Innocent is determined to guide these players on a path that leads to a bright future ahead, one where they can take the skills they have learned from this program and apply them to whatever they choose to do after graduating or transferring on from Pierce College.

According to team member Celeste Miller, this new style of approach forms a family-like atmosphere.

“She’s very personable and likes to make sure that everybody is on the same page, that we’re all comfortable,” Miller said. “I think that’s important, especially in sports and as a coach I haven’t had a lot of coaches like that, so I really like playing for her.”

Innocent said the team is still on the hunt for more hungry players to join the roster. Anyone interested in playing is welcome to contact Coach Innocent to find out what the requirements are to join the team.

Looking ahead to the future, Innocent said the team is ready and it’s going to be an exciting year, so it would be wonderful to have the support of the Brahma student population as they launch into this new journey.

“We just want the support,” Innocent said. “If we could have people here to watch us working hard while we’re playing against other teams, that would be beautiful. We need that energy in here.”