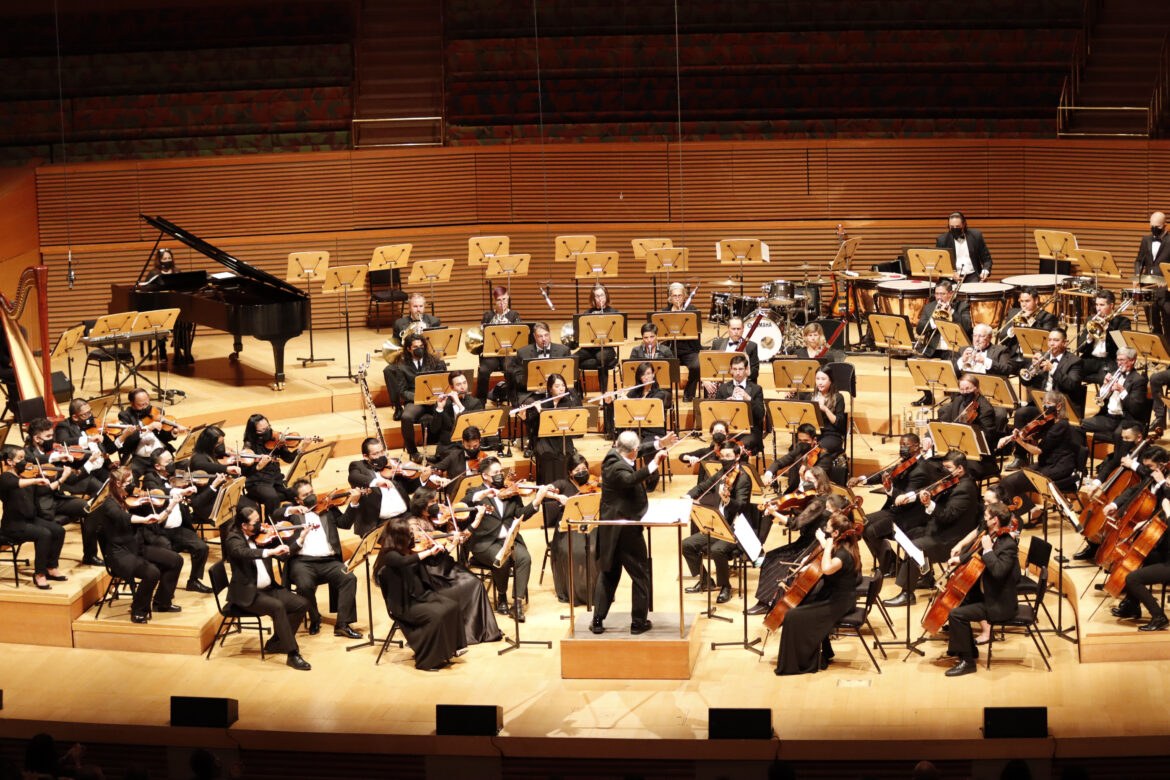 After a period of performing in Zoom concerts during the COVID-19 pandemic, Pierce College music professor Wendy Mazon was able to walk onto the stage at The Music Center’s Walt Disney Concert Hall in Downtown Los Angeles and take her place among the Filipino American Symphony Orchestra (FASO) for their first in-person production since 2019, titled Celebration!

Mazon, who was also recently appointed department chair of Music at Pierce College, has been playing with FASO for over eight years, first as second clarinet then as principal clarinet.

Once the pandemic began, it took a lot of discipline to practice and stay performance-ready, she explained.

“What was nice about FASO is that they understood how difficult it was during this time for musicians,” Mazon said. “The board worked diligently to create opportunities for us through the orchestra—they did several Zoom concerts, and they were all paid concerts for the musicians. That way we could continue to reach out to the community and share the gift of music.”

Mazon said that FASO gets a little bit of music from both worlds—classical music and Filipino music.

“There’s this other side of the group that shares the Filipino culture and music through performing pieces that you normally wouldn’t hear when you go to another orchestra,” Mazon said. “I think that is very special and unique.”

Two concert attendees, Eric and Naty Panuncialman, spoke about what they were looking forward to for the evening and said they love listening to Filipino music.

“We’re hoping to see a nice concert of Filipino music,” said Eric Panuncialman, who graduated from the University of the Philippines and will be the president of the Alumni Association in Greater Los Angeles. “The composer, the music, will be coming from very famous Filipino artists. That’s what we’re looking forward to.”

Naty Panuncialman added, “The music that they will be playing is from an artist that we grew up with.”

The song “Christmas in Our Hearts” by Jose Mari Chan, a Filipino singer and songwriter, was played toward the end of the concert and was greatly enjoyed by musicians and guests alike.

“He [Chan] essentially is a musical treasure of the Philippines,” Mazon said. “For people that celebrate Christmas, it’s kind of like he was the voice of all of the Christmas songs.”

Guests come to experience the symphony for many reasons, including if they have personal connections to the music or to the artists and performers.

Daniel and Regelyn Checo, who were first-time attendees, are friends with one of the singers of the Philippine Mesister singers and one of the artists in the orchestra.

“This is great—we totally enjoyed it,” Daniel Checo said, speaking during intermission.

Another one of Mazon’s favorite pieces they played that evening was “Big Beautiful Country/Love at Thirty Thousand Feet.” The jingle, which was composed by Jose Mari Chan in the 1970s and used by the Philippines Airlines, is a familiar tune for many Filipinos, explained Mazon.

“What’s interesting is that I didn’t grow up watching that commercial. But, I understand the power of it,” Mazon said. “We played it several times with the orchestra, so now for me, it reminds me of the experience and how much fun it is to play with the group.”

As the musicians performed the piece, a screen above the stage displayed a slideshow of different cities in the Philippines.

“I would say that was my favorite and I actually got emotional, just because it was so nice to see different places all over the Philippines,” Mazon said. “It reminded me of just how beautiful it is there and everything that they have to offer. That’s the power of this type of music, or just music in general.”

Mazon stays busy as an educator and a performer, and looks forward to continuing both jobs.

“I enjoy my job and enjoy working with the students and it’s the same case with FASO,” Mazon said. “I enjoy the work that we do and the community outreach that happens with it. It’s wonderful because it’s a way for me to express and be a part of my roots because I’m half Filipino and half American.”

Mazon added, “I still have a lot to learn and I get to learn through that group, because we play music that maybe I wasn’t exposed to because I didn’t grow up in the Philippines. I get to learn more about my culture and so it’s a nice connection.”