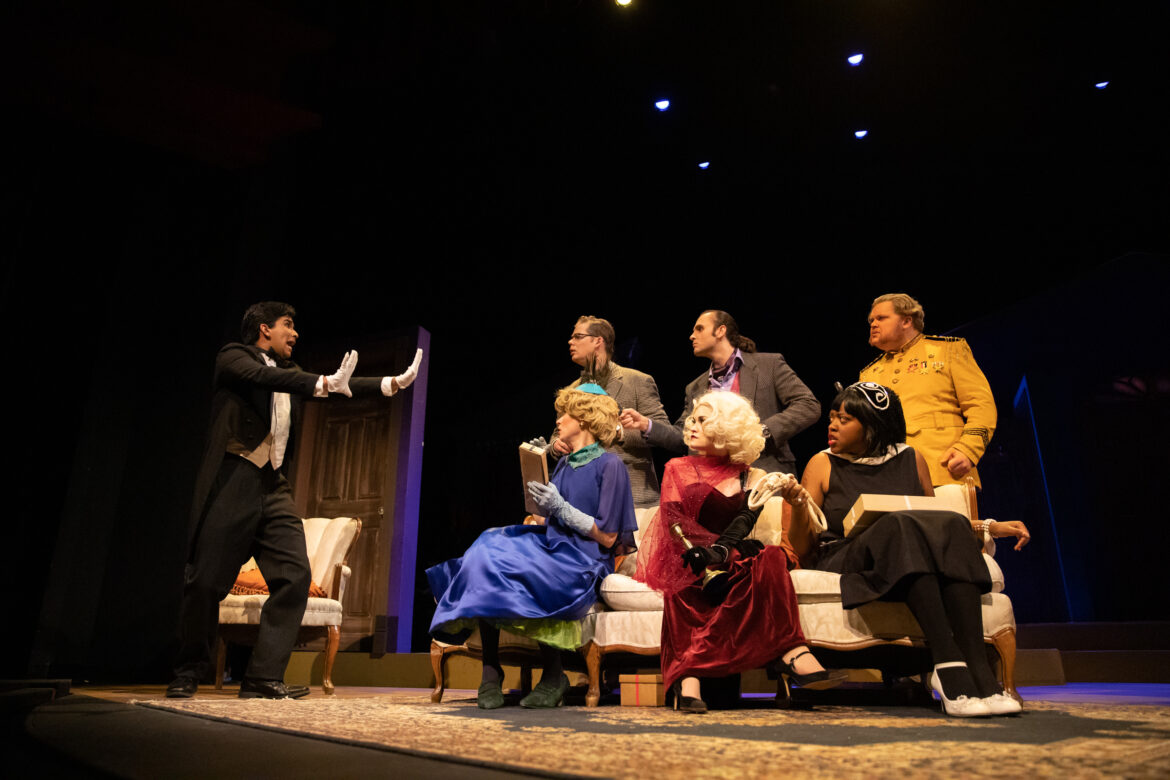 During Halloween what could be more fitting than murder and malice at Pierce College?

But don’t worry. This isn’t the kind of morbid murder that one will expect this time of year.

Instead, “Clue,” directed by Shaheen Vaaz, is an intentionally over-the-top comedic ballet that is on the edge-of-your-seat humorous. “Clue” ran from Oct. 28-30 at the Performing Arts Mainstage.

Adapted from the movie in 1985, the play features a cast of colorful characters and boasts some impressive choreography between the actors and backstage sound and effects design.

The first thing of note about the play had little to do with the play itself, but was more related to the production.

The stage was intricately decorated beyond expectation as opposed to other shows. At the beginning of the play, it was peppered with random objects, such as a table with wine glasses and silverware. Couches with cushions, cabinets and cupboards, more tables, there were many places to hide murder weapons, as well.

This is a murder mystery, after all.

The play itself starts with two characters implying that the “players,” such as Colonel Mustard (Jonathan Bowen) and Mrs. White (Laura Lyles), are participants in a game.

Mustard’s entrance into the lounge was received with cheers and chuckles from the audience, as were the entrances of the other characters. Their names were pseudonyms, alternate egos, but not real.

After a bell went off and humorously startled some of the game’s participants, everyone gathers around a dinner table, giving the actors a chance to show off their acting, which trades some believability for a healthy dose of stylism.

The dinner scene sets the stage for the play’s signature acting style, which is reliant on choreography.

The guests are then ushered from the dinner table to a study, where the butler Wadsworth (Itzhak Matos) tells them that they are present because they have been blackmailed and were to have secrets extracted from them. It should be noted that every guest was revealed to live in Washington, D.C., and many of them come from political backgrounds.

It is at this study that the host Mr. Boddy (Jacob Gonzalez) dishes accusations and the guests defend themselves.

The Red Scare serves as a setting for the play; the suspects themselves are blackmailed into telling the truth with the fear of being framed as communists. One specific character even says at one point, “I’m not a communist! I’m a Republican!”

The lights went out, and when they turned back on, the play took its signature murder mystery form as multiple people on set were revealed to be dead. This clearly wasn’t going to be a game anymore for them or the Host.

It is during this segment that the acting, while well executed, becomes a little overdone, although this is clearly intentional.

But the acting is presented in a  talented, energetic fashion. It is, at times, done in sync with the music, sound effects and other actors. It takes a lot of talent to be as animated as the performers are.

The suspense of the play is built up as the guests, Host and some visitors have to find the killer against the clock, before the cops show up to collect damaging evidence.

The play  is a ballet of technical prowess, compelling set design, and well-choreographed acting that all comes together in a fitting adaptation that does the movie justice.