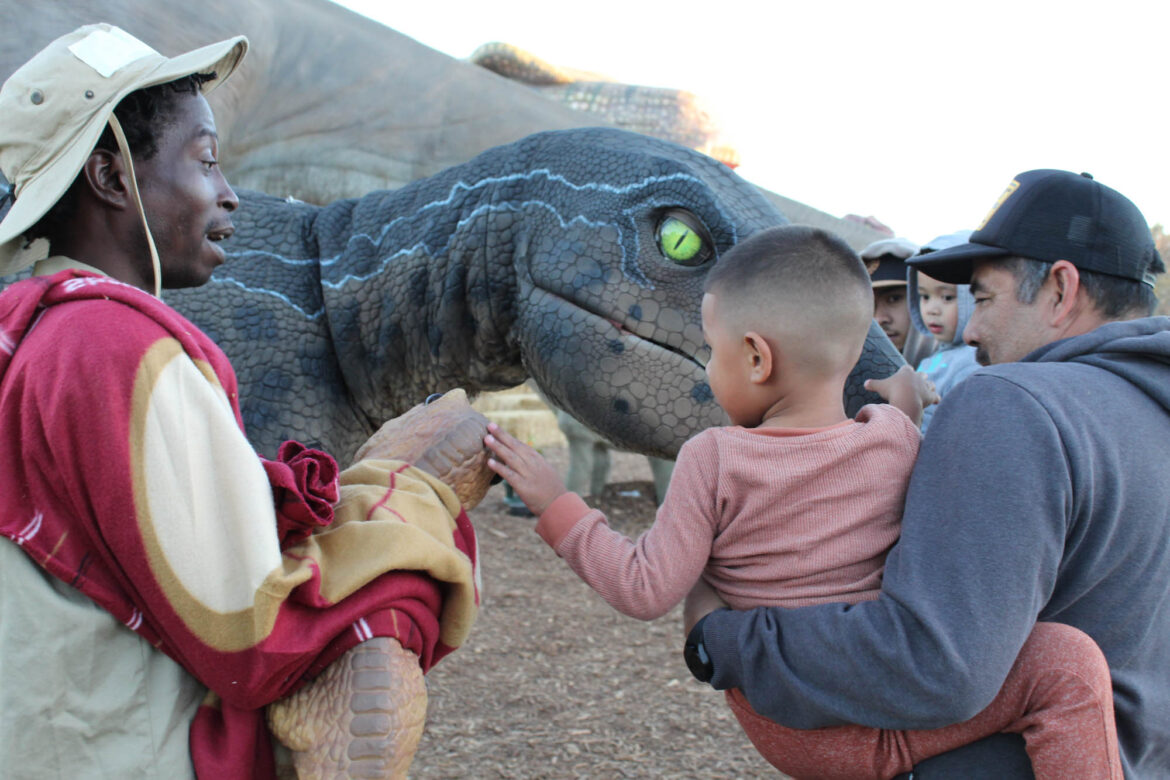 You’re at Pierce College, but 252 million years in the past. It is the Mesozoic Era and it’s a Thursday. Dinosaurs populate this space, and 30-foot-long Triceratopses and 40-foot-long Brachiosauruses can be spotted in the distance.

Suddenly, you come face-to-face with a breathing Utahraptor, with its piercing yell, its winking eyes and feathers.

One can get carried away when they encounter all this at Dinosaurs in the Valley, an immersive event that aims to educate its audience about dinosaurs and leave spectators in awe.

With over a 100 animatronic dinosaurs that are built to scale, from baby dinosaurs to a 40-foot-long T. Rex, event producer Matt Flynn said this was the “biggest dinosaur show in the United States.”

“These are true to life size dinosaurs.” Flynn said. “True to color, true to sound as well as all their movements.”

Each dinosaur, according to Flynn, is made up of steel and metals with mechanical machines at the base, while foam and a rubber like material covers the outside. Placards with descriptions of each dinosaur are also destined to appear next to them, with Flynn saying at the time of this interview, “We‘re still in the process of putting that up.”

After sunset the dinosaur exhibit took on a new look with LED lights illuminating more of their features. As Flynn put it, the night event takes on “a whole new effect.”

“When it’s dark out and we have colorful lights hitting the dinosaurs, you can just hear the noise of the dinosaurs and see one in the distance that’s lit up faintly,” Flynn said. “It adds a little intensity to the experience.”

SoCal Influential Mom Bloggers Club Member Cristal Valle, who toured the event at night with her son Christopher, wished there was more light at the time of the interview but as long as he’s having fun she said, “I’m all up for it.”

Flynn addressed the lack of lights illuminating the walkway and said more lights will be added by opening night.

Valle, who came from Carpinteria and is often invited to attend events in LA, agreed to this event because her son loved dinosaurs. When asked about her favorite part of the event, she said, “The Jolly jumpers are pretty fun and all the interesting facts about the dinosaurs too.”

Christopher, who is in the 1st grade, said he liked the different kinds of dinosaurs. The one he liked in particular? “The T. rex,” he said.

For Explorer and Jurassic Park dinosaur advisor “Dino” Don Lessem, scientific accuracy is very important. When asked about why some dinosaurs at the event had feathers and others didn’t, Lessem said it’s rare to get well preserved fossils that show the imprints of feathers in the rock and while little meat eating dinosaurs and a relative of the T. Rex had feathers, there is no evidence to suggest other dinosaurs had feathers.

“We do know that the ones with feathers–they weren’t any good for flying. So it kinda makes sense that a little animal would need the insulation of feathers to stay warm, whereas a big animal, like the giant dinosaurs, have what’s called ‘mass homeothermy,’” Lessem said, who is also the CEO and founder of the animatronics company Dino Don, Inc. “They’re so warm inside like an elephant that it doesn’t take much for them to stay warm so they don’t need feathers.”

Lessem, who is the author of numerous science books and a documentary host of PBS NOVA, said his work with dinosaurs started when he worked as a science reporter for the Boston Globe and asked to interview “two of these crazy scientists out west.”

“So I went, and I thought what they did was amazing–being able to read an ancient landscape that isn’t there anymore and then finding these amazing animals,” Lessem said. “So I quit my job and went to every dinosaur dig in the world because there were only about 40 people who dig dinosaurs. Period.”

After finishing work with Steven Spielberg’s 1993 blockbuster, Lessem asked for all the movie props and sets and made an exhibit to critique the movie and raised money for dinosaur research.

“I only started making robots 4 years ago when I realized we could make much bigger and more accurate ones than the ones [people are] probably used to seeing,” Lessem said. “But this exhibit also has the original velociraptor from the first Jurassic Park movie because I kept some of the sets and props.”

According to Lessem, scientific accuracy is not important to the rest of the dinosaur exhibits but it is to this exhibit because the models are all based on the latest evidence and it is “the only place where kids can see dinosaurs as they really were.”

“So we better get them right and as big as they were because it is amazing how giant they were,” Lessem said.

The exhibit also hosts a Sensory Friendly Session on Saturdays for participants who have sensory sensitivities.

The event is produced by Lessem, Rainmaker Films and Ultimate Fun Productions. It has also partnered with local charitable foundation Motor4toys, whose mission it is to help as many children as possible during the holiday season.

Dinosaurs in the Valley will run weekends until Dec 18.

More information can be found at www.dinosaursinthevalley.com.