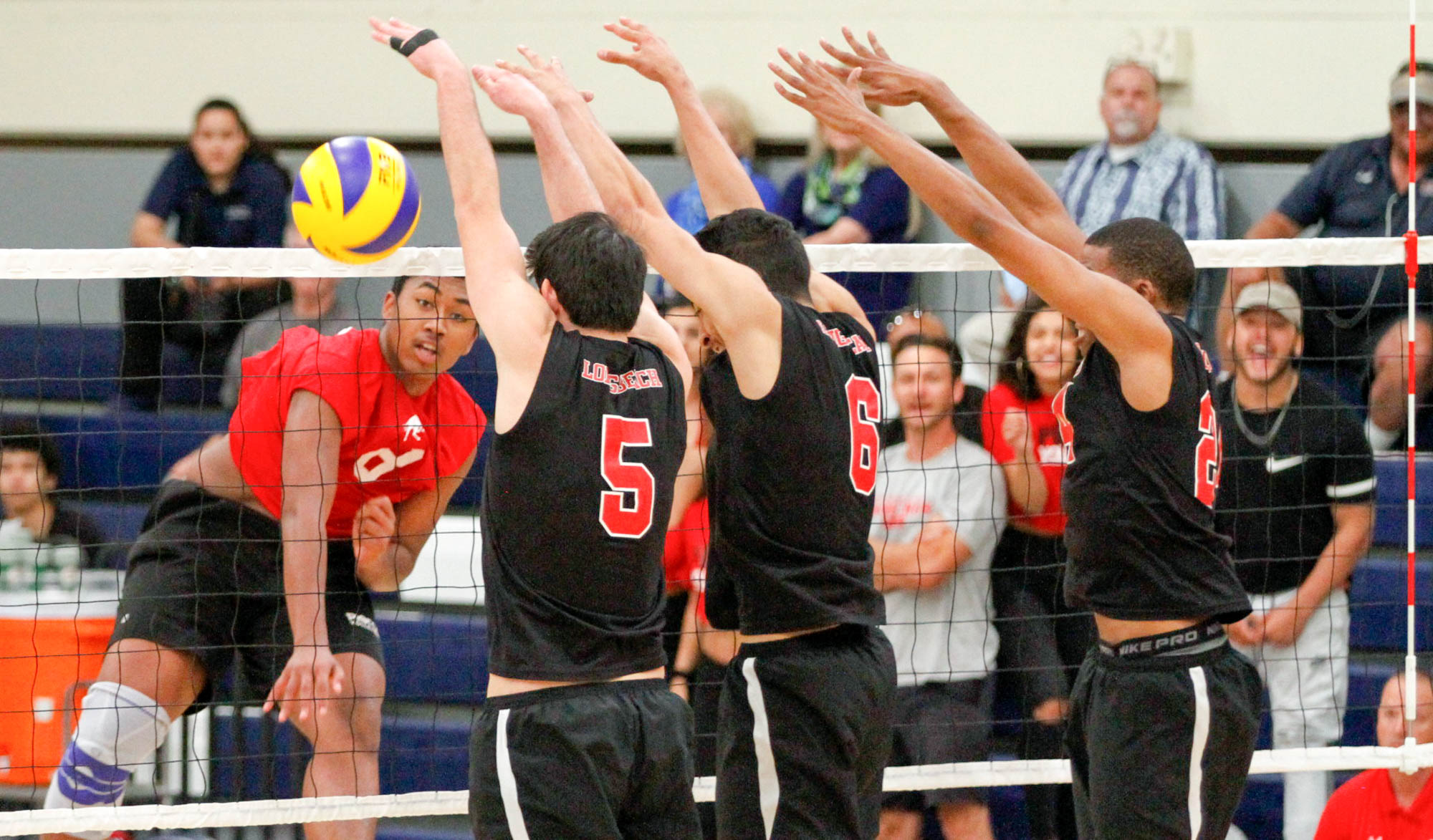 The undefeated No. 1 Long Beach City College Vikings pillaged their way through the state on the way to the semifinals of the men’s volleyball championship. Twice in the regular season the No. 4 Brahmas met the Vikings, and twice they lost in straight sets.

Thursday was a different story.

The Brahmas dispatched of the reigning champion Vikings in dominant fashion, winning in straight sets (25-13, 25-20, 25-19) to move on to Saturday’s championship game.

“It’s good to see my guys are confident. It’s good to see us playing with purpose,” head coach Lance Walker said. “There’s a lot of stuff we had to overcome this year. And this is a pretty great group of guys.”

The offense of the Brahmas was balanced throughout the game. Cole Chea led the way with 13 points on nine kills, three blocks and two block assists. Morgan Wadlow added 10 kills, and Max Petuhov had seven.

Western State Conference MVP Bernardo Roese continued his impressive season with 29 assists, showing an ability to place the ball anywhere on the court. Roese ranked second in the state in assists per set (10.11).

The first two sets were controlled by Pierce from start to finish, with the Brahmas never trailing.

The Vikings weren’t ready to give up and set sail back home.

However, the Brahmas would not allow the Vikings to gain any real confidence. At most, Long Beach held a one point lead in the third set. A 17-16 lead was the latest the Vikings had any control.

The Brahmas pulled away, and Wadlow shot the final arrow to light the Vikings ship aflame on the first match point opportunity for Pierce.

“I know it was an individual kill, but I think it was a credit to all the hard work we put in throughout the season,” Wadlow said. “I got the kill, but it was the pass and the set that lead to my kill.”

Chea sees the win and Saturday’s championship game as a chance for redemption.

“Last year when I was a grey shirt, I just remember when we lost to SMC in the semis,” Chea said. “Crushed my heart. I’m like, that’s never gonna happen again.”

The Brahmas season started off rocky with some players not being academically cleared to play in the first few weeks. But they reached 100 percent eligibility and found their way on the court, eventually leading to an undefeated run through conference. According to Walker, that was a big obstacle to overcome.

Chea saw the change and growth in the team throughout the season.

“We deserve this. We’ve turned things around ever since off season,” Chea said. “It’s just the best thing in the world knowing my team pushed for every single point we got.”

Following their victory, the Brahmas waited for the outcome between No. 2 Orange Coast College and No. 3 Irvine Valley College. Chea wasn’t concerned with who they would face.

Walker shared Chea’s sentiment that if the Brahmas play their game, the jersey on the other side of the net doesn’t matter.

“We’re going to worry about us, not really about them,” Walker said. “If we play the way that we played, we serve and if we hit and all those things, it’s going to be really tough for guys to face us and beat us.”

The CCCAA Men’s Volleyball State Championship game is scheduled for Saturday at 7 p.m. at Fullerton College.