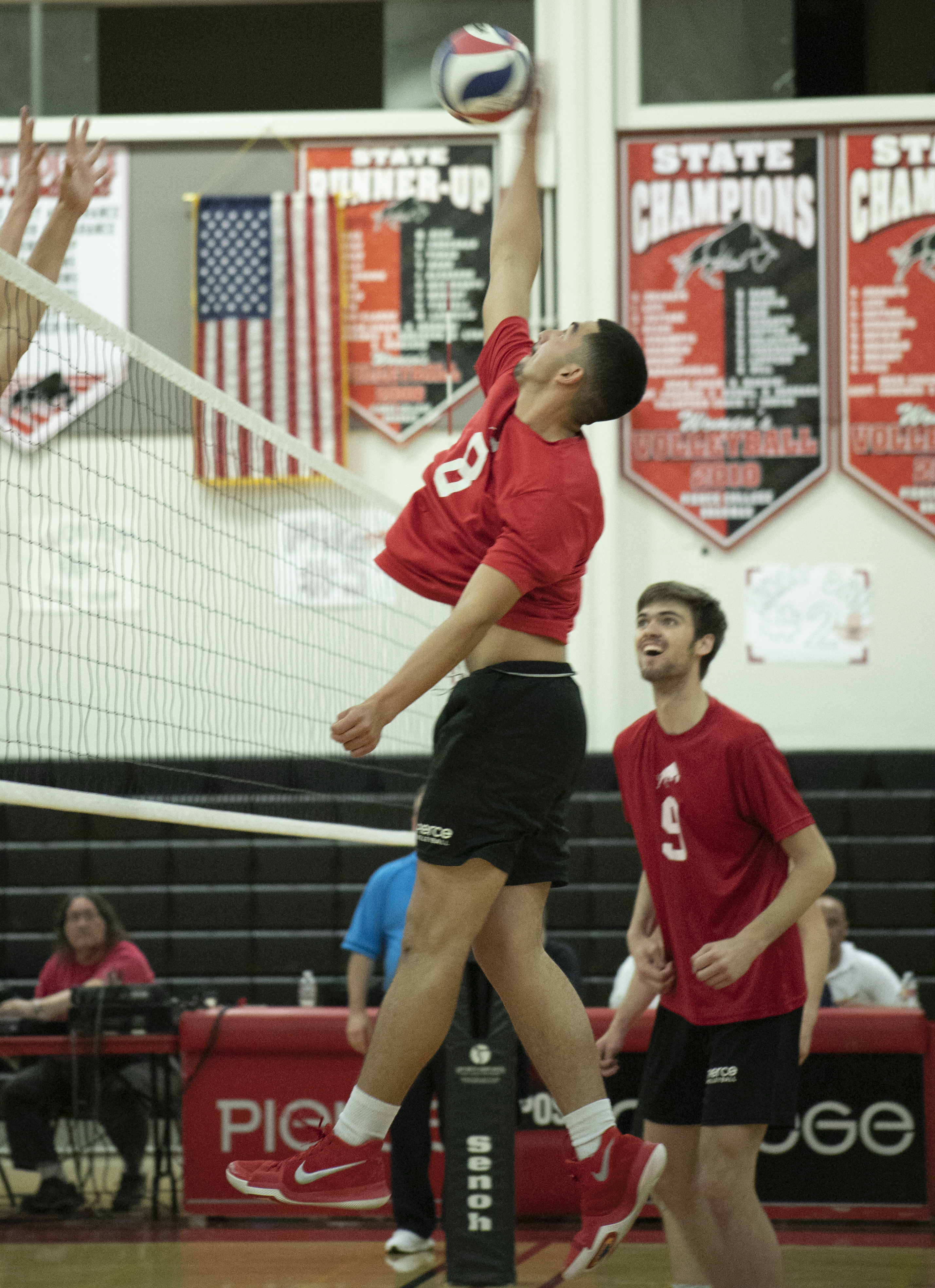 Men’s volleyball struggled to finish their season with a win, as they lost against Moorpark College Raiders in four sets.

In a tight fourth set, Pierce and Moorpark struggled at the beginning to take the lead, but the Raiders moved ahead with precision and won by a score of 25-22.

Joshua Giron, opposite and middle hitter, said despite the struggles they’ve gone through as a team this year, is a demonstration of how hard they tried to keep up.

“I’m proud of the way we did,” Giron said. “ I don’t see it as a rough game. I see it as a kind of perfect way to end our season. We really tried and we gave it our all.”

Coach Joe Arechiga pointed out that some of the team members suffered injuries this season but they still manage to pull through all the games.

“We had Wyatt [Bates] setting for a second game,” Arechiga said. “ He just came back from injury, which is incredible. So he showed a great performance.”

Arechiga said he had to make changes due to the injuries.

“Gene played in a position that he wasn’t really used to either, and Josh play outside, but he did a great job swinging overall just a really fun game to watch it. and we all played really hard for the last batch,” Arechiga said.

During the first set was completely controlled by the Raiders putting the Brahmas in a disadvantage from the start.

The Raiders played aggressively at the beginning giving the Brahmas no opening to catch up.

For the second the set, Moorpark worked solidly in every single attack, which the Brahmas struggled to block.

Degrasse was a key player in the game as his assistance and determination helped the team move ahead on different occasions, which Coach Arechiga mentioned how important his presence has been for the team.

“He’s an absolutely incredible player or an incredible engine and just so much love for his team and for the game,” Arechiga said. “ Even when we’re down to the entire season, he’s always been the carrying us keeping us up.”

Gene Kim, setter, said the team can still put up a fight despite having a rough season.

“This last game tonight really showed us that we still competed despite all that we pulled through,” Kim said. “ We basically said, ‘you know what, we can’t change what’s going on right now. Like we can’t change that but we could still not give up.’

Kim said despite they still managed to win a set.

“We faced Moorpark, and they are like at the top of the conference. And we were still able to take a set on. I’m so proud of our team, and proud of the sophomores because they put everything on the floor,” Kim said.

The third set was intense for the Brahmas as they moved through to make a difference in the game, which Wyatt Bates, Giron, and Degrasse were some of the members who helped to put the team ahead.

Their efforts weren’t enough after tough dives and swings, the Brahmas couldn’t claim victory for their last game.

The Brahmas end their season with overall record of 3-13, 1-11 in conference play.