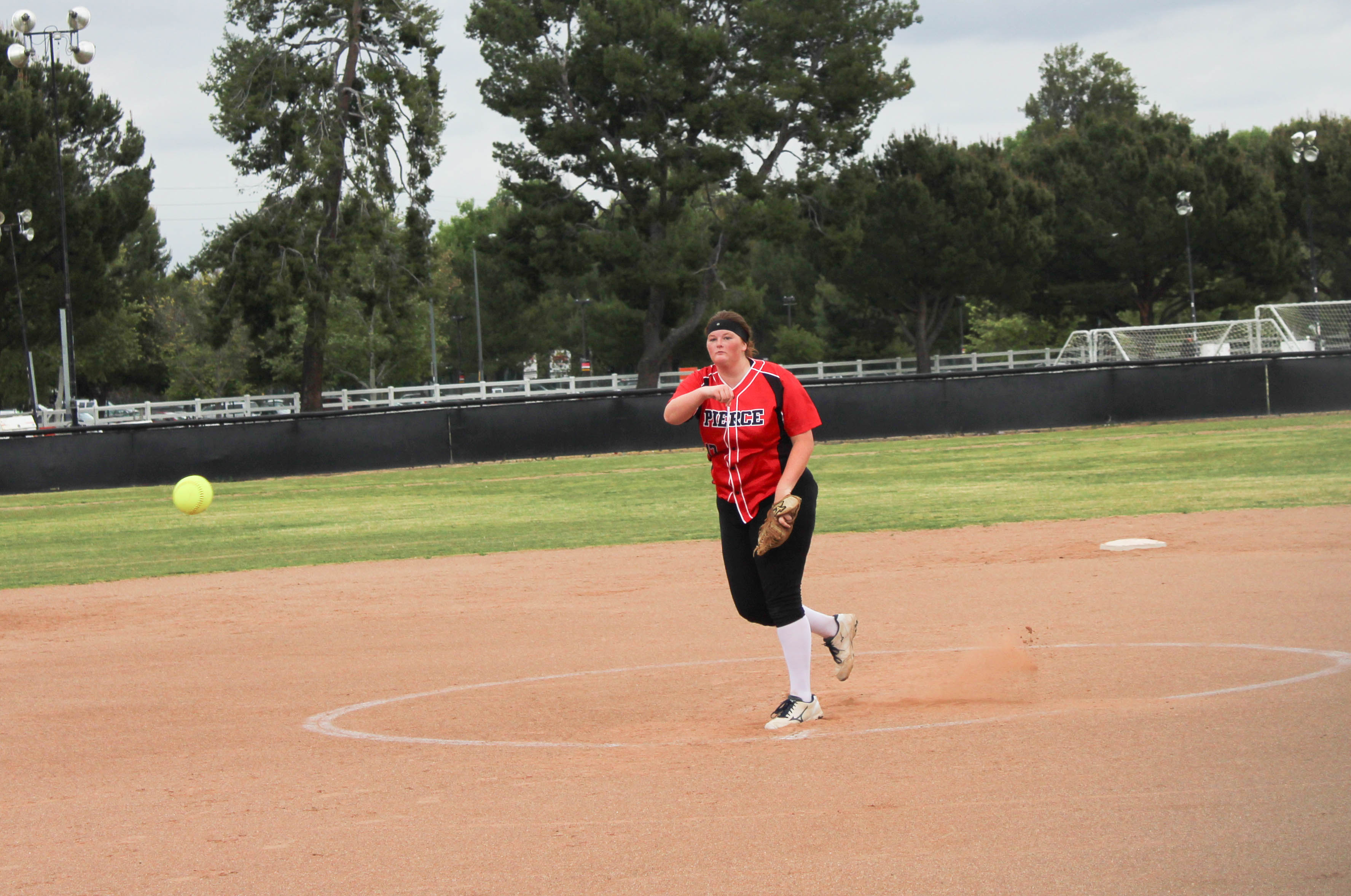 The softball team lost in their final home game of the season to the Bakersfield College Renegades by a score of 15-1 on Tuesday, April 16.

Bakersfield started out ahead in the first inning with three runs due to Pierce’s fielding errors.

At the top of the second inning, pitcher Jody Cory struck out three batters in a row with her fastball.

Cory said starting off strong was good for morale because the last time they played Bakersfield it didn’t go well for them.

“To have some strikeouts against them was really encouraging and helped me push through the last bits of the game,” Cory said.

Bakersfield got a few more runners home in the third and fourth innings, but again Cory showed them that it wasn’t going to be that easy when she got a double play in the bottom of the fourth.

Assistant Head Coach Mark Cooley explained that Cory caught the second base runner off guard with a delayed reaction.

“She did great. She turned around to check the runner. We were late on covering, but it worked out anyways,” Cooley said.

Cory said she had a similar hit come at her earlier in the game, which made her determined to make that play the next time.

“It was right off the end of her bat. It wasn’t too fast, so I was able to kind of snag it off my right side,” Cory said. “It was easy to just kind of take the momentum of the ball, turn and I noticed the girl on second hadn’t gone back and she was kind of being a bit lazy and not paying attention. So, luckily my teammates were there to back me up and get on that base.”

Pierce got their first run in at the bottom of the fourth inning, thanks in part to a fly ball deep into center field that put Jessica Villegas on third base.

Villegas explained that it was her first triple of the season.

“I honestly didn’t expect it,” Villegas said. “I just swung away, cut it in half and I was like, okay, it’s past center and I better run faster.”

Villegas said she scored by taking advantage of Bakersfield’s fielding error when her teammate Jocelyn Ramos got a base hit.

“I was going to stay at three, but I ran in because she bobbled the ball, so I was like, okay I’ll just go ahead and score,” Villegas said.

Cooley said that even though they didn’t win, they played well enough to give them the confidence to finish out the season strong.

“We have two games left, one on Thursday at Hancock and then the other at Cuesta on the following Tuesday,” Cooley said. “I think this is the way you want to go out. You want to play the better team now, and it’s gonna hopefully prepare us for the next two.”