*UPDATE: Chancellor Francisco Rodriguez responded to the Senate document in an email Tuesday. Rodriguez said the District will consider their solutions. You can read his response at the bottom of this article.

Students planning to enroll in fundamental English and math courses may be surprised. The Chancellor directed to remove them from the fall schedule.

Representatives from the departments expressed opposition to this decision at Monday’s Academic Senate meeting, because it interfered with their transition plans to work with AB 705. The bill “maximize the probability that a student will enter and complete transfer-level coursework in English and math within a one year”

Crystal Kiekel, the Center for Academic Success director, argued that there is a major misconception that these courses are part of the English and math sequences.

She explained that students will not be placed in these classes as a requirement for transfer as they can have the liberty to take these courses for their development.

“We believe students should be able to choose to take a class that will allow them to strengthen their fundamental grammar, learning skills and their arithmetic skills should they choose to do so at any point before or after their transfer sequence,” Kiekel said.

Before AB 705, courses, such as English 21 and Math 110/115 were considered two or three levels below transfer level, excluding them from any sequence with pre-requisites.

“So that means that we can no longer place students so low in a developmental sequence because students were sort of dwelling in below transfer level courses for years,” Kiekel said.

Tchertchian stressed student equity, student choice, and students having the ability to make better decisions about their courses.

“It’s important to point that up to 40 percent of our students here at Pierce College are CTE students, career technical education students, so many of those enrolled to gain just a specific skill. Their goal is not to transfer,” Tchertchian said.

The Senate unanimously approved a document that expressed opposition to the Chancellor’s direction the stated several reasons for inclusion of the English and math courses.

The Academic Senate announced their newly elected president Barbara Anderson winning with 84 votes, while Fernando Oleas had 33 votes according to the Nominations and Elections Committee.

“I’m excited to win but also humbled, realizing that it’s a really important role to represent the faculty well and the pre-previous presidents have done an excellent job,” Anderson said. “The current president is amazing, so I have big shoes to fill.”

Read more about AB 705 at: here and here 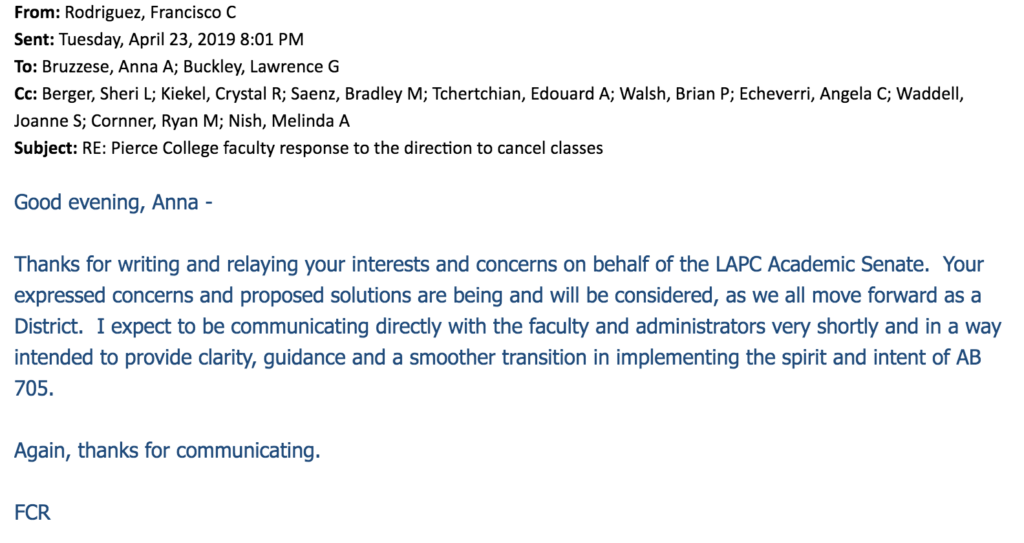