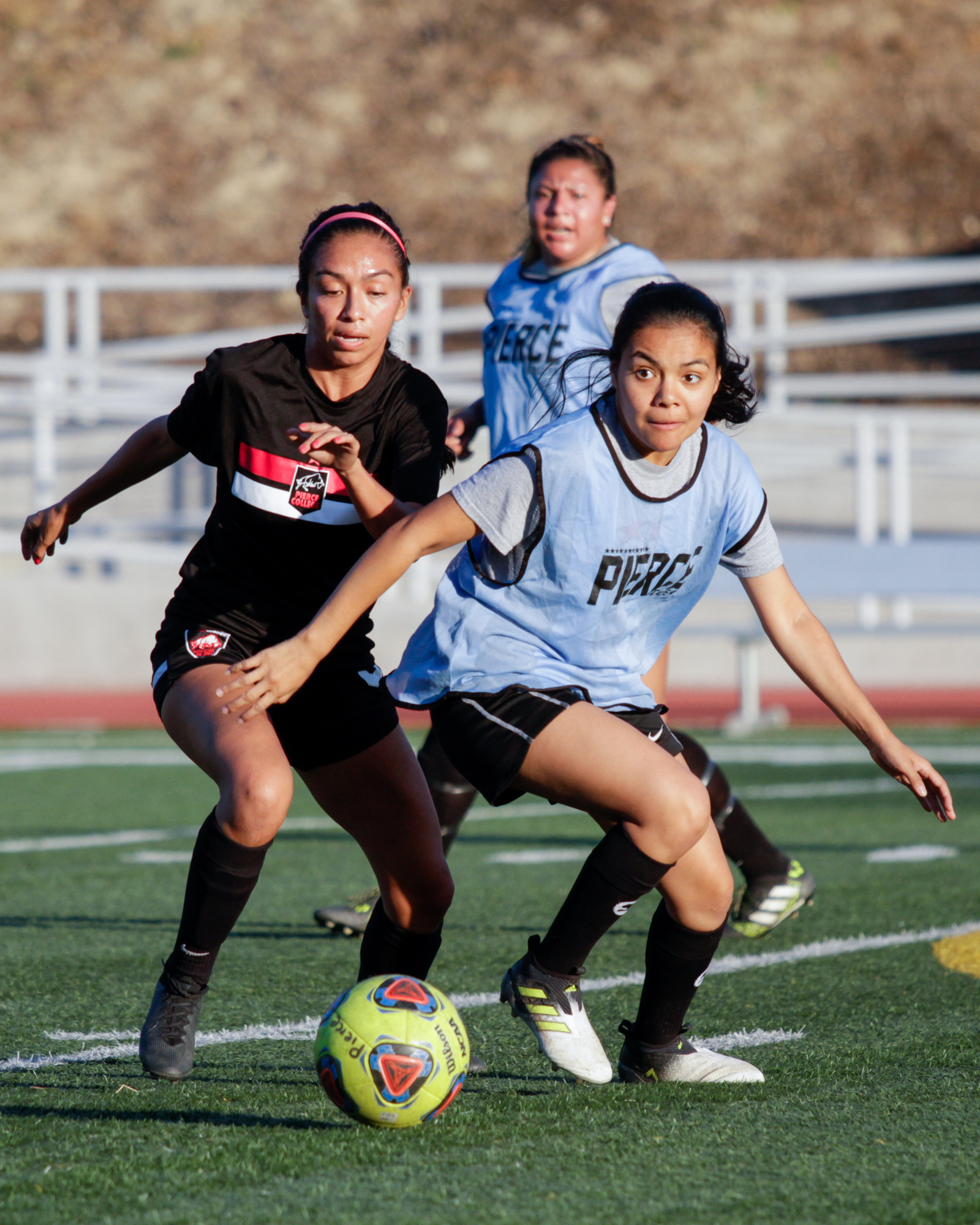 The sound of cleats kicking the ball across the field echoed throughout Shepard Stadium during a generational clash with the current Brahmas soccer team and the alumni.

The team were originally scheduled to face the West LA College Wildcats, however it was canceled.
Head Coach Adolfo Perez, decided to have a little fun without wasting a game.
“I texted a few of my old captains and word got around,” Perez said.

The teams played three 30-minute halves. Jackie Hilario and Daisy Alvarenga scored for the alumni. In the final minutes, Yessina Marquez cut the deficit to 2-1.
Within the first 10 minutes of the second half, Marquez scored her brace to tie the game at two.

The Brahmas started the third half with their third goal scored by Diana Millan. As time ran out, it seemed the Brahmas would win 4-2 thanks to a goal by Preet Kaur.

The game was competitive yet lighthearted as the girls poked fun at one another.
Leading up to the game, the alumni had mixed feelings.

Alexis Mendias played for the Brahmas from 2013 to 2014 and was slightly anxious to come back to play.

“We were mostly worried if we were still going to have it, but it just comes naturally, we figured it out,” Mendias said.

As the game went on, the competitiveness increased, so did the laughs.

Gisell Cruz, who last played with the Brahmas in 2018 was happy to return.

“I was really looking forward to seeing that competitiveness and having fun on the field,” Cruz said.

Mendias said it was about enjoying the moment and not taking it seriously.

“Another hard part was telling yourself to just have fun because there’s a difference between playing with the need to win, and being able to come back and just play for fun against the next generation,” Mendias said.

At the end of the game, the two teams shared kind sentiments and compliments towards one another, recognizing their efforts, and appreciating their shared past. The alumni reminisced about their time on the team, and Perez reconnected with his past players.

“Time passed by but we still got it. We’re still really close so catching up was really natural,” Mendias said.

This was the first time the Brahmas soccer team was able to have an alumni game, and the teams were grateful for the opportunity.

Gabriela Portillo who is currently on the team learned from the experience.

“Seeing how hard they play after so many years, that’s very inspirational to me. It gives me the motivation to play harder and even continue soccer. It just gives me hope,” Portillo said.