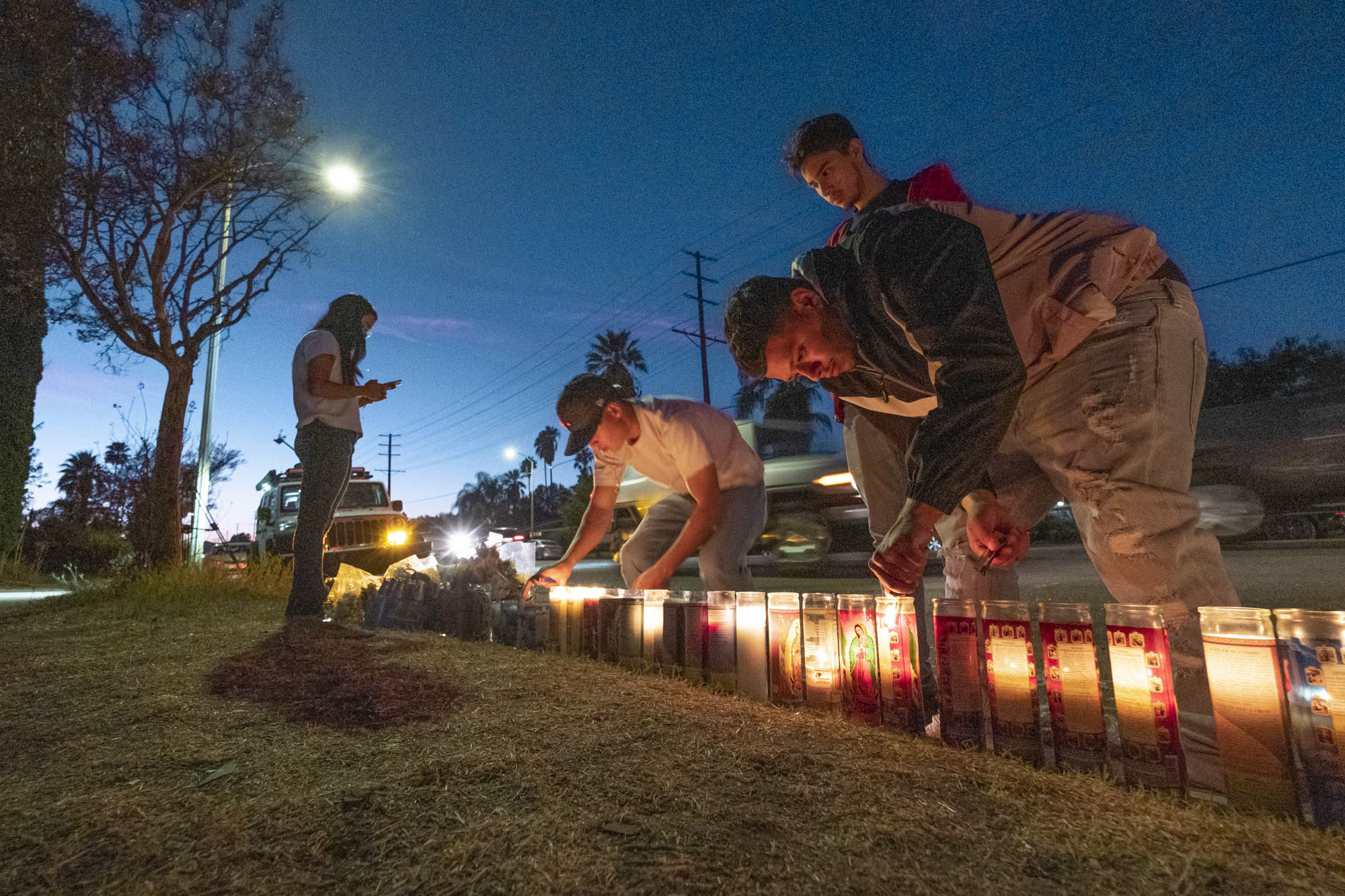 Pierce President Alexis Montevirgen said Cesar Perez was a member of MEChA de Pierce. He was not a member of the club, but he was involved in it, according to MEChA advisor Angelita Rovero.

A vigil was held in the Student Engagement Center.

The location of the fundraising car was has been changed to 21910 Sherman Way, Canoga Park, CA, 91303 in the Big Lots parking lot.

Carrasco faces up to 11 years in prison if he’s convicted, according to the Los Angeles County District Attorney’s Office.

Los Angeles Daily News reported Carrasco pleaded not guilty on Tuesday to the charge of gross vehicular manslaughter while intoxicated.

The fundraising car wash that was scheduled for Nov. 24 at Canoga Park High School at 9 a.m. has been changed to 10 a.m.

A row of lit candles with religious figures lined the sidewalk on Parthenia Street alongside an arrangement of flowers in vases. The asphalt ground was spray painted in white cursive—R.I.P. Cesar y Louis.

Pierce student Cesar Perez, 19, and brother Louis Perez, 16, were passengers in a Chevy truck, according to KTLA, when they died in a car crash Sunday on Parthenia Street, between De Soto Avenue and Mason Avenue. The 20-year-old driver of the vehicle, Pablo Roman Trujillo Carrasco, was arrested on suspicion of murder, according to KTLA.

The teen brothers were killed after Carrasco “drove into oncoming traffic, lost control and slammed into two parked vehicles,” according to KTLA. The brothers were pronounced dead at the scene.

Elva Rodriguez lives near the crash site and said she witnessed the aftermath. Rodriguez said she saw the brothers being taken away in body bags by the paramedics.

“A lot of people were here and the two bodies were the only thing I saw,” Rodriguez said. “I don’t know how [the car] flew to the other side.”

Family and friends of the siblings left candles, flowers and other offerings Monday at the crash site.

Jose Rivera, a friend of Cesar Perez, said he attracted people with his outgoing personality.

“He was a really happy guy and funny around other people,” Rivera said. “He was the life of the party, a really good dancer.”

Perez was a part of the MEChA club on campus and helped out at the Dream Resource Center, according to Pierce President Alexis Montevirgen. Montevirgen said he was sad to include the news of Perez’s death in his report at the Academic Senate meeting Monday.

“Our thoughts are with Cesar and his family during this difficult time,” Montevirgen said.

Cases like this are tragic for both the families and friends and for the loss of life that comes from it. If you or anyone you know has been affected by similar circumstances, reach out to a Personal Injury Lawyer to help with the process that follows that can help offer you peace of mind.

The Health Center is available for counseling services for any students who need it.

“I think I would have the students call and say, ‘I’m really struggling with the loss of my friend who died this weekend,’ and just identify,” Benne said. “They don’t have to go through any detail.”

Benne said counseling helps to process grief because it allows people to address their concerns.

“We just let them talk,” Benne said. “It’s very raw and very new and most of the time [talking is] all somebody needs.”

A GoFundMe page has been set up to raise money for funeral funds. According to the page, Cesar Perez provided the majority of living expenses for his mother and six siblings. As of Monday night, the page has raised more than $10,000.

A fundraising car wash is also scheduled for Nov. 24 at Canoga Park High School at 9 a.m. to raise donations for Perez’s family and to cover funeral expenses.