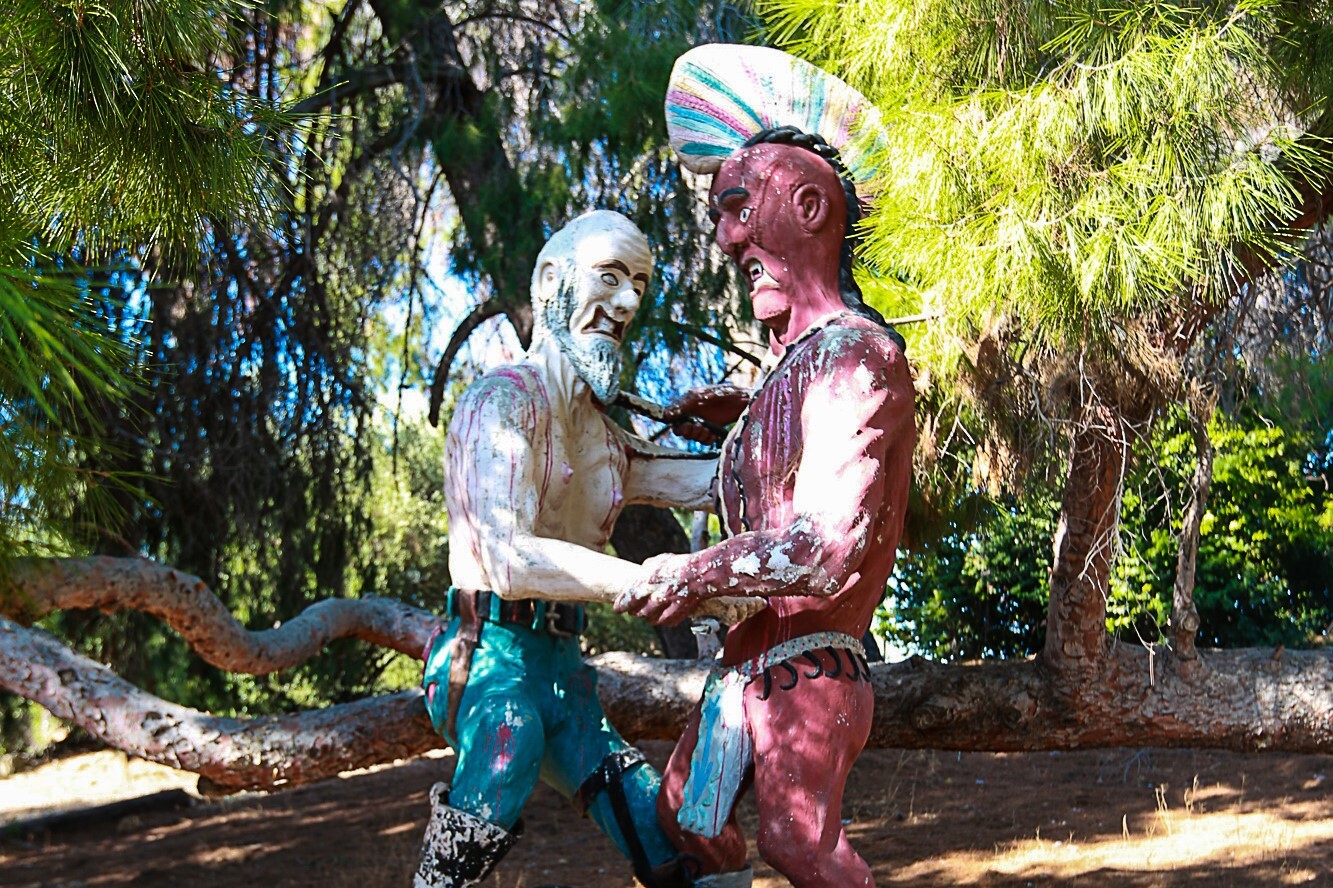 Since the widespread protests that erupted from the killing of George Floyd, statues across the country were torn down as a rise against racism.

Now, many in the campus community are looking more closely at a historical landmark installed at Pierce College in 1988.

Old Trapper’s Lodge is a collection of statues that were put into campus and were considered to be folk art. The several statues depict indigenous Americans, some of which are seen kidnapping and stabbing other individuals, which many have found disturbing.

“My feeling about the statues is that they are a part of Pierce’s racist past and present,” sociology professor James McKeever said. “That really needs to be changed.”

McKeever, who has been a long time advocate toward removing these statues, said there’s been talk but no action.

“I give the new president and chancellor until the fall semester to do something about it,” McKeever said. “They’ve been talking about who they’ve been in conversation with, which includes the state, but nothing literally has been done yet.”

Considering the lack of progress, McKeever believes that the statues won’t be removed anytime soon. McKeever, who has been in this fight for about nine years, says he hopes to see them gone in 2-3 years.

“We are actively pursuing the correct and proper way of getting the statues off campus,” Pierce College President Alexis Montevirgen said.

Montevirgen explained that Pierce College does plan to remove the statues but wants to contact the family of the artist and allow them to be part of the removal process.

“We are continuing to work with places that may take them out, but also trying to initiate contact and have a conversation with the family of the artist,” Montevirgen said.

Montevirgen added how removing the Trapper’s Lodge statues creates a difficult process because of how large and heavy the artwork is.

“It’s not an easy piece of work that you can lift up and move to another location. These are very large statues that are cemented in at certain points,” Montevirgen said.

Brian Walsh, the chapter president for the faculty guild, has also been fighting to remove the statues. Strongly agreeing with McKeever, Walsh believes the statues are horrible and are incredibly racist.

Along with difficulties of agreeing to remove the statue, Walsh explained that there are many legal issues that must be dealt with.

“Anybody can come on campus and anybody can check it out,” Walsh said. “It’s a public art installation. The fact that it’s a state landmark, you have to jump through many hoops. You can’t just rip it up and get it.”

Obviously, the process of eliminating the statues will take some time. Especially with the rise of pandemic, strong advocates like McKeever and Walsh are limited to what they can do.

Many students have been feeling outraged because this process has taken years.

Manon Guijarro, a student attending Pierce, believes that the statues can be offensive toward Pierce’s diverse community. Native American students in particular can feel uncomfortable by what Old Trapper’s Lodge depicts.

Guijarro also believes further action should be taken to speed up the removal process.

“I think we should push for a protest to remove the statues,” Guijarro said. “I’m really happy for the professor doing all this work. We need more people to back him up and get this done. This is not acceptable.”

McKeever said he’d be filled with emotion the day this issue gets resolved.

“My first reaction was to tear up a bit,” McKeever said. “We should not have to fight this hard. People of color, LGTBQ+, women, have been fighting since the inception of the country. To get this close and see it actually go down, it would be one of my greatest accomplishments at Pierce College.”