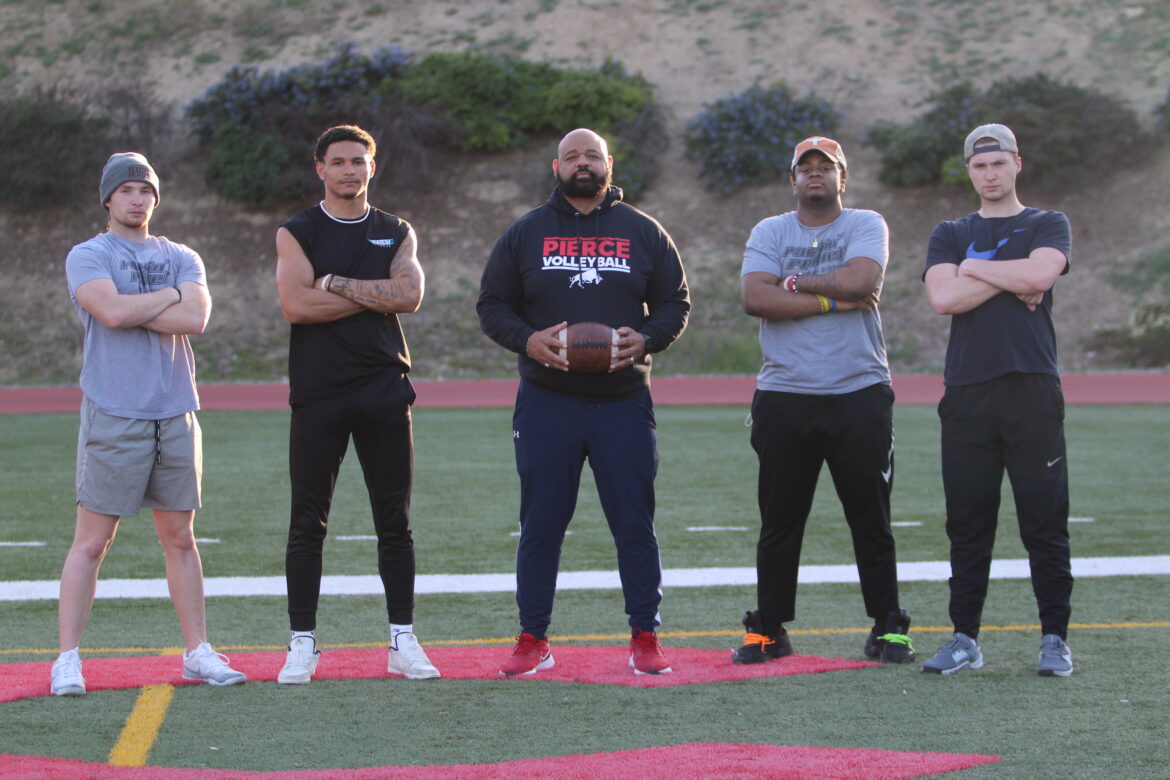 After a season of difficulties, the Pierce College football program will have a familiar face returning as head coach.

Fitness Center Coordinator James Sims returns to lead the team after taking over on an interim basis in 2017. He coached the remaining eight games, finishing 4-4.

Sims will take over for Anthony Harris, who stepped in as the interim head coach in October 2019.

The Brahmas finished the 2021 season 0-10, with multiple games forfeited because of a shortage of players.

Sims said he received an email from Acting Vice President of Student Services Juan Carlos Astorga to see if he was interested in the position, and said that he was ready to step onto the gridiron.

“It is going to be my biggest challenge yet,” Sims said. “We have to [increase the roster size]. That has to be our number one priority, to get some kids in the school. Also, we have to go local. If we get out-of-state athletes, that’s fine. But between now and June, we need to get 100 kids to commit to the program.”

Sims went to several high schools to make connections with their head coaches, and to see several potential players for the team.

Sims said that out of those 100 kids, 20 or 30 might leave because of grades, personal reasons or lack of interest.

He said his second priority will be to get the coaching staff together.

“Some of the coaches that were with me in the year I was interim have expressed interest in coming back,” Sims said. “That’s great because we have that familiarity and they know what I expect. It’s hard when you come into this job when you need to bring in new coaches. To have two [familiar coaches] come back with me is huge.”

Sims said his intention is to have a new staff, but there is a possibility he may retain one of the coaches who was with Harris last season.

Sims also said it will take a while for the team to gel, but said at the end of the season, he wants to look back and see the progress made.

“I have the experience. I’m already at the school full-time and it makes sense,” Sims said. “They have something that most schools don’t have. They have the chance to see me in the position and judge my work. That is an advantage because when you bring a new coach, you don’t know how it will turn out or how they will perform.”

Sims is hopeful that the administration will commit to their support and provide resources to help the program for the upcoming season.

Athletic Director Susan Armenta said she supports the decision of Sims being named the head coach.

“I’ll support any decision that is made to help our student-athletes,” Armenta said. “I feel that Coach Sims being on campus and being accessible to our students is a positive thing. They’ll be able to be successful not only on the field, but also in the classroom.”

“He has been at the campus for years,” Lofrano said. “It is good to see they are looking at loyalty. I wish him the best in the position, and I know he will continue to have a great impact on the athletes.

Sims said that he guaranteed Pierce’s team will compete next year.

“You are going to see football. When you attend a game, you will be entertained,” Sims said. “I don’t care who we play. We are going to compete.”