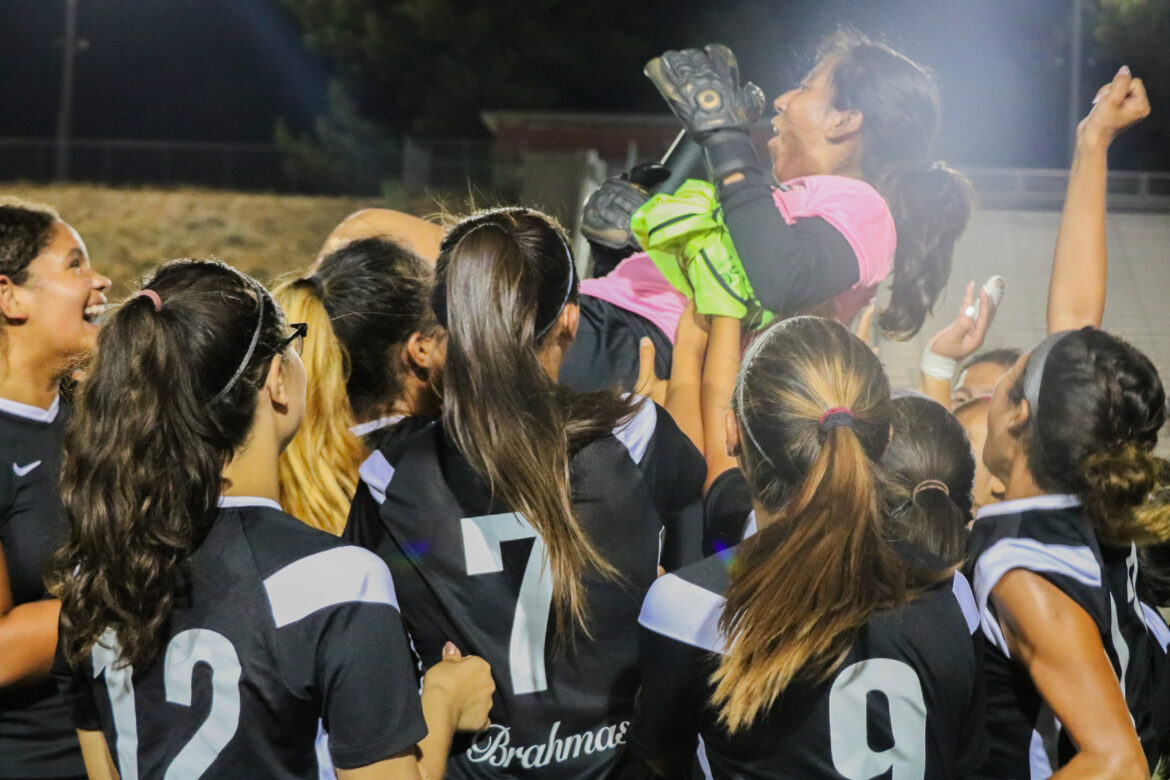 In front of a good crowd at John Shepard Stadium, the soccer team managed to hold on to the lead against the Antelope Valley College Marauders in their home opener.

Despite tempers flaring on the field and in the stands, the Brahmas won with a final score of 3-2.

Four of the five goals came on set pieces, including three penalty kicks.

Head coach Adolfo Perez said that a couple of his players are playing at their unnatural positions and lack of focus was the main concern going into the game.

“I think it’s a lack of concentration,” Perez said. “We’re trying a different goalie and we have the defensive player of the year not playing in the middle. Instead, she’s playing on the side and that’s hurting us.”

Defender Natalia Puccio said she was stunned that most of the goals didn’t come from open play.

“I was actually surprised that they were all set pieces,” Puccio said. “We don’t normally score a lot from set pieces.”

All of Pierce’s goals came in the first half.

The first of the Brahmas’ goals was from a free kick scored by freshman forward Livia Pereira.

Pereira elaborated on what she saw and why she shot it instead of crossing it.

“The free kick was close to the goal so I saw I can kick it instead of crossing it,” Pereira said.

Perez said the goal was magnificent and Pereira is getting used to the style here because it’s different from Brazil.

“Unbelievable goal, that set the tone for us,” Perez said. “She still has to get used to the American game. She’s Brazilian and is used to a lot of finesse and it’s very physical here.”

Puccio said she had all the confidence in Pereira shooting it.

“I had so much faith in her,” Puccio said. “She’s great at taking free kicks. That’s why we put her there, and especially at an angle that’s always going to be hers.”

After Pierce took the lead, Antelope Valley College tied the game after a penalty kick was given.

Forward Paola Figueroa scored giving Flor De Luna no chance at saving the shot. De Luna has played in goal after their projected starter was ineligible.

The Brahmas immediately responded with a penalty kick as Puccio scored her second goal of the season.

The Brahmas strengthened their lead 3-1 through freshman forward Heidi Ricketts.

AVC got back into the game through another penalty kick scored by forward Cassi James to bring the score 3-2, but the Brahmas were able to hold off a comeback effort.

Puccio said that the team started off slow but that they got going by matching the Marauders’ intensity.

“I thought that we started off a little flat-footed and as soon as we realized how hard they came out we gave them the same energy,” Puccio said.

Perez said he was unhappy with the physicality in the Marauders game plan.

“It’s early in the year and they’re hitting us,” Perez said “The referee said he hasn’t given out three yellow cards in three years in a girl’s game. That’s the physicality they were playing at.”

The Brahmas start the season 2-0 and will host Southwestern College Jaguars on Tuesday, Sept. 6. at 4 p.m.